A distinctive, red and striking beauty, the MEWA ARENA was built in 2011 as the new stadium of 1. FSV Mainz 05 (first under the name Coface Arena, from 2016-2021 as the OPEL ARENA). It does not only serve as a venue for the Bundesliga matches of 1. FSV Mainz 05, but also as an event venue and a new figurehead of the city of Mainz. Architecturally, it was constructed with four steep one-tier stands and open corners with a view of the city and the surrounding nature. These features make it stand out in football Germany. The MEWA ARENA unites the spirit of traditional football venues with the functionality of modern stadiums.

Keeping the loud and thrilling atmosphere that the old Bruchwegstadium was known for in mind during the process of building the new stadium, the MEWA ARENA was designed with steep, close to the pitch stands with a high percentage of standing tickets. With a total capacity of 33.305 fans, there are 13.700 standing tickets for home fans and away guests. The lower part of the back straight stands are the support area with 3.000 places for standing fans which generates a special boiling-pot like atmosphere for a fierce support of the team.

From the outside, the large red archways which frame each of the four stands, make a lasting impression. At night, they are illuminated, showing over a long distance that the MEWA ARENA marks the home of red-and-white 1. FSV Mainz 05.

Guest who visit the MEWA ARENA will be greeted by a welcoming entrance. When coming to the stadium from the center of the city, the first thing to be seen is a cubic porch, which harmonizes with the architectural design of the red archway and opens up to the inside in a light-flooded foyer. The hospitality area of the MEWA ARENA seats about 2.700 VIP fans – 2.000 on the VIP stands and 700 in 35 VIP boxes.

Passionate, emotional, modern, down-to-earth, familial, open, hospitable, friendly and not taking itself too seriously – the club 1. FSV Mainz 05 has a special kind of style and character. This is also reflected in its custom-made stadium. It says MEWA ARENA on the outside, but within lies the heart of football.

For 74 years, it was the venue for 1. FSV Mainz 05. Even now, the heart of the club is still beating at the Bruchwegstadium.

Show me your stadium and I’ll show you who you are – this credo has been true for 1. FSV Mainz 05 for many decades. The Bruchwegstadium used to be the exact replica of its club: It started out as nothing more than a dilapidated post-war relic, then turned to be a provisional solution and in its final decade became a loveable tin box with an impressive atmosphere. Sure, the stadium has never been a particular beauty, and it probably never rose to any importance in the history of German football. But the strong emotional ties of the people of Mainz to their stadium never cared about that kind of criteria anyway. The relations of 1. FSV Mainz 05 and its Bruchwegstadium have changed a lot over the course of history. It started out as an unloving relationship that over 74 years became very affectionate in the end. In 1937, 1. FSV Mainz 05 was forced to relocate because its old venue at the Fort Bingen turned into a military casern. At the Bruchweg, today Dr.-Martin-Luther-King-Weg, there was a cinder track and a non-roofed sporting venue ever since 1929. It is not certain when 1. FSV Mainz 05 had their first game at the Bruchwegstadium, but the era in that venue almost came to a quick stop, as the Second World War left its ugly traces in the form of bomb craters on the pitch. 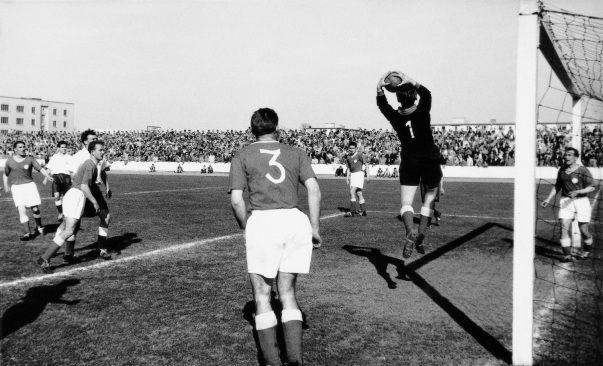 It was not until 1949, that 1. FSV Mainz 05 was able to play in the Bruchwegstadium again. Two years later, the cinder track-surrounded sporting facility received a ring of stone steps. In 1953 the pitch was transformed into a grass turf, and the main stands got a roof shortly after that. Still, the venue was not a real fancy stadium. And it remained like this for decades. It was not until 1981 that the back straight received a roof as well. The few hundred fans that came to watch 1. FSV Mainz 05 in the nineteen-eighties did not take too much notice of it.

In the nineteen-nineties, the Bruchwegstadium got its first electronic scorebord with light bulbs in it. In 1995, the floodlights symbolized the minimum requirements of professional football.

Show me your stadium and I’ll show you how you are? A grey, mousy mouse. „The greyest among all of them“, says Manager Christian Heidel in retrospective. 1. FSV Mainz 05 has become a second division club, yet one that still lacked the support of the city it was located in and a strong fan generation. The Bruchwegstadium still had a brash, prudish kind of charm to it and only attracted those players who were tough: mold in the locker rooms, scratchy bath tubs where one would endured abrasions every time you had to enter them for treatment of muscular problems. There was nothing glamorous there like a VIP room or a nice bar. Basically, there was nothing.

But after 1. FSV Mainz 05 achieved some minor success, the stadium changed for the better. In 1997, when the FSV initially fought for the promotion to Bundesliga, the stadium received two new stands, and for the very first time, the fans at the Bruchweg felt like they were in an actual stadium. With the new stands came new fans and a fan scene started to develop.

The second extension of the venue also happened when 1. FSV Mainz 05 had hopes of promoting to the Bundesliga. Though missing that goal in a highly dramatic fashion in 2002, the plans to rebuild the main stands were still put to order. A necessity, as the few places the stadium had to offer were not nearly enough for the ever growing fan community of the FSV. In the corners of the stadium, provisional roofless stands were built from steel pipes – a curiosity in the Bundesliga. This finally made the defining charm of the Bruchwegstadium: it was useless when it comes to winning a beauty contest, but it was a stadium that grew with the club and its fans, and its history was present in every stone and every structure.

It’s the stories that make this stadium so special. Whoever felt the helplessness on May 23rd 2004, after having scored a 3:0 win against Eintracht Trier, whoever waited, breathless, for the results from another stadium, hoping, wishing that 1. FSV Mainz 05 would not yet again be betrayed of the promotion to Bundesliga in the very last moment of the season, whoever broke out in collective jubilance, tears of joy and screams of laughter, whoever experienced that will understand. Just that one moment makes the Bruchwegstadium a monument of memories for the whole city of Mainz.

Because it is emotions that make a stadium come alive, moving out of the Bruchwegstadium was not an ending, but a beautiful beginning. When more than 20.000 fans marched from the old venue to the new Coface Arena in the summer of 2011, they moved all their love for football and excitement for their team with them into their new sportive home. Yet the heart of the club is still beating at the Bruchweg. The Coface Arena only turns into an epicenter of football for the home games of 1. FSV Mainz 05. The professional players still train and meet at the old stadium on a daily basis. The youth teams U 23 and U 19 also carry out their home games on the traditional turf. 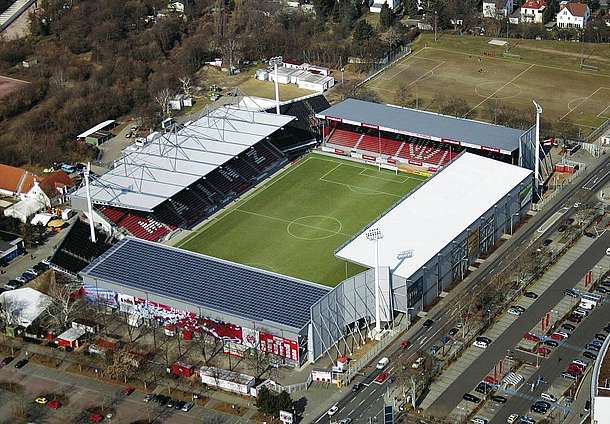