Mainz show a strong improvement in their recent form and take three points from their away match against Eintracht Frankfurt. 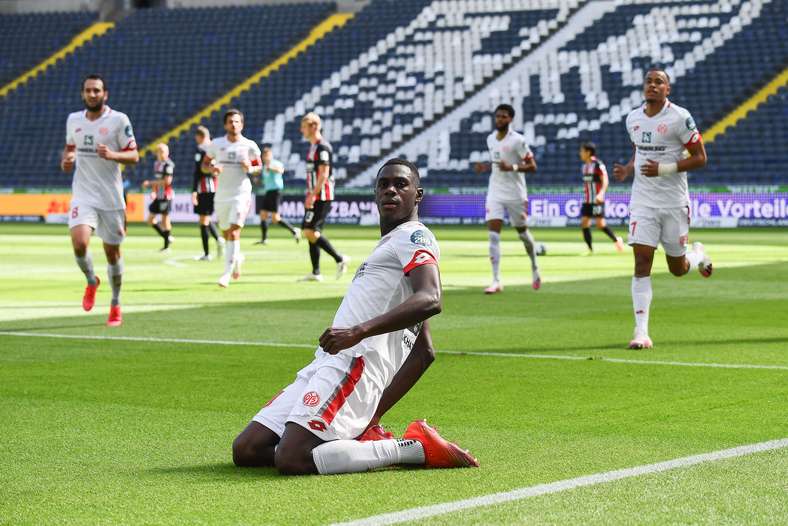 Today’s winners of the Rhein-Main Derby were Mainz 05. With a strong showing at Frankfurt’s Commerzbank-Arena, the Zerofivers had their vice-captain to thank, as Moussa Niakhaté gave them the lead shortly before half-time (42’). The win was sealed when substitute Pierre Kunde scored late on (77’)to secure a deserved away win and three important points in the relegation battle.

The Zerofivers lined up in a 4-3-3 formation and head coach Achim Beierlorzer made five changes to the side ahead of the game against Frankfurt. Phillipp Mwene and Daniel Brosinski came into the side to take the full-back roles, with Jeremiah St. Juste playing at centre-back. Captain Danny Latza and Levin Öztunali played in central midfield, while Jeffrey Bruma, Alex Hack, Edimilson Fernandes and Jean-Paul Boetius were dropped to the bench. Ridle Baku was suspended following an accumulation of yellow cards.

Beierlorzer had demanded energy and determination from his team and that was exactly how Mainz started the match. JP Mateta and Taiwo Awoniyi’s efforts failed to test the goalkeeper in the first five minutes. The Zerofivers attacked the Eagles in their own half, pressing hard and snapping at loose balls, leaving the hosts with little in the way of time and opportunities. After nine minutes, Eintracht countered and Almany Toure fired high over the goal from Filip Kostic’ cross. Eintracht began to turn the screw as Kostic missed again five minutes later.

After winning the ball early a couple of time, Mainz had made forays into the Frankfurt penalty area, but had not yet found the first goal. Both teams tried not to leave any chances to the opposition, but when they did, the situation got out of hand fast. After Daniel Brosinski had a shot from distance saved, a minute later Quaison was free in the middle, but the ball from Awoniyi spun out of the Swede’s path. The game began to look more end-to-end, as the agile Kostic spun on the left-hand side and fired a curler just wide of the far post. Awoniyi almost had a tap in, but he missed the ball and Mainz’ wait for a goal continued. Just when it looked like it was going to be one of those days, Moussa Niakhaté leapt highest from a corner and powered an effort in to give Mainz the lead (42’). Mateta could have scored again before the half-time whistle, but Mainz went into the break deservedly ahead.

After a strong first half, the Zerofivers came into the second half unchanged, and with the momentum from the first half intact. Mateta scored 7 minutes after the restart, but his goal was flagged for offside so the deficit remained at 1-0. Awoniyi embarked on an amazing run for most of the pitch, but what would have been a sensational goal was saved by the sprawling Trapp. Frankfurt, seeing the game slipping away from them, began to become more brave and defend with a higher line, but were almost immediately punished when Robin Quaison scored, only for his goals too to be called offside. (67’)

The Zerofivers had Brosinski to thank for his set-piece deliveries, which were greatly improved. The left-back almost caught Kevin Trapp out with a shot from 50 metres out that almost dipped under the crossbar. With Karim Onisiwo and Edimilson Fernandes having come on for Mateta and Öztunali, the Zerofivers coach sought to preserve his lead rather than seek another goal, but nevertheless one came. Pierre Kunde, who had come on as a substitute in the second half, broke away on a counter-attack, and tucked in from distance to give Mainz the two-goal cushion they needed and deserved. After the goal, Mainz still had to be careful, but they managed to preserve their clean sheet and get the precious three points, which will prove vital in the relegation battle.