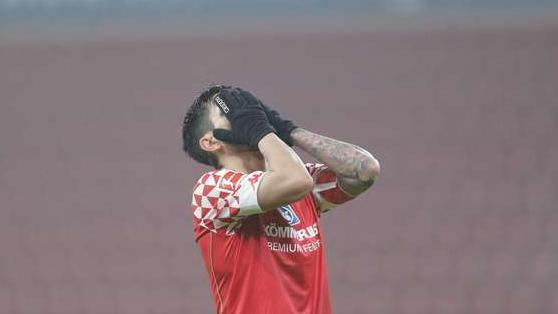 Mainz suffered another disappointing defeat against a direct rival on Saturday afternoon in FC Köln. With the game at a manageable level, Elvis Rexhbecaj scored the only goal of the day shortly after the break at the OPEL ARENA. Even the final attacks after Ondrej Duda was shown a red card brought nothing in the end.

Jan-Moritz Lichte made three changes a week after the defeat in Bielefeld. Captain Danny Latza, Daniel Brosinski (playing his 200th Bundesliga game against his former club) and Karim Onisiwo returned to the starting eleven against Effzeh, while Leandro Barreiro, Aarón and Robin Quaison were on the bench.

And it was to be a tough affair in the OPEL ARENA. Both teams acted cautiously, without taking any risks. As a result, after 15 minutes there was not only nothing to report on the scoreboard, but also no shots on goal to report. Ellyes Shkiri made the first attempt a little later, but Robin Zentner was on hand to keep out his effort from almost 20 metres. The visitors were jubilant just a minute later, but Jan Thielmann's joy was short-lived as Rexhbecaj's low cross was just offside. The Zerofivers struggled to keep possession of the ball, which the visitors often gave them. Defensively, they had everything under control for the most part, but were not determined enough in their forward play. The first chance of the half came from Onisiwo, but his shot went well over the bar.

There were few chances until, out of nowhere, Jean-Philippe Mateta made his first significant impact on the game in the 41st minute. Jean-Paul Boëtius sent the ball to Latza, who crossed back from the touchline to the forward, but his shot missed the target from close range (41'). In the 44th minute, Cologne came back and took a free kick quickly, but in the end Zentner had no trouble with Ismail Jakobs' shot. Shortly thereafter, the teams went into the changing rooms level at 0-0.

Both teams returned to the Mainz drizzle unchanged. However, the level of the game remained manageable: In the 54th minute, the hosts created the first chance after the break with a beautifully worked attack. Alexander Hack played a pass to Onisiwo, whose ball was not fully caught by Latza and Timo Horn was on hand to save (54'). His opposite number Zentner, on the other hand, had no chance shortly afterwards. Duda had crossed from the right, Rexhbecaj did not hesitate and put Cologne in the lead (55'). And the visitors could have added to their tally twice after that, when Zentner first saved a Duda shot and then, after a corner kick, a header from the goalscorer (both 57'). Mainz faced an uphill battle but at least had half chances from Latza (60', blocked) and Hack (header, 62'). But the visitors narrowed the spaces around their own box even more, gaps were hard to find.

After an hour, Lichte reacted by bringing on Quaison and Kevin Stöger for Boëtius and Latza. This was a clear signal to go on the attack, but it was not to happen. At first, Cologne had some of the best chances to extend their lead, but Zentner saved from Wolf (72') and Anthony Modeste missed poorly two minutes later (74'). In the 76th minute, the Effzeh hurt themselves when Duda was shown his second yellow card within a few minutes by referee Felix Zwayer and was sent to take an early shower. With the substitutions of Kunde Malong and Abass Issah for Burkardt and Hack, Lichte now put all his eggs in one basket. Could they at least manage to score the equaliser? The next opportunity for Mainz came from Quaison in the 81st minute, whose shot was deflected over the bar by Horn. And Edimilson's deflected attempt was also cleared by the visitors number one (85'). Mainz were running out of time. But there were still plenty of chances. First, Quaison was unable to put the ball into the box in the 90th minute after a pass from Moussa Niakhaté. And in injury time, Onisiwo and Mateta (after Zentner's pass) failed to score. Thus, Mainz are still waiting for a win after six games at home in the OPEL ARENA this season. With five points from eleven games to their name, the Zerofivers face Hertha BSC on Tuesday evening before Werder Bremen visit the Rhine next Saturday.