Mainz level against Reds in first friendly, but without goals 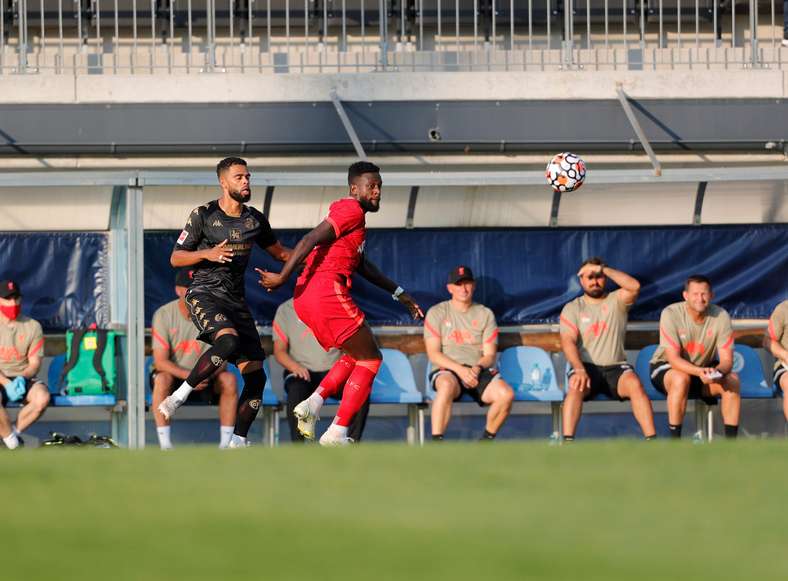 Jeremiah St. Juste in a duel with Divock Origi.

A reunion of old acquaintances, bright sunshine, 3,500 euphoric fans and a late lucky goal. Mainz 05 lost its first friendly match of the summer training camp against Liverpool and 05 coaching legend Jürgen Klopp at the GREISBERGERS BETTEN ARENA in Grödig 0-1 despite a good performance. An unnecessary defeat, as the 05 head coach also found.

The first half of the match was largely balanced, Liverpool had a slight advantage on the field, but defensively the Mainz three-man defensive chain around David Nemeth, Alexander Hack and captain Moussa Niakhaté hardly allowed anything to happen, while in possession the Zerofivers tried again and again via the wing of the attack-minded Daniel Brosinski, who had the most promising Mainz chance on his foot (21'). After a double pass with the agile Bobzien, the right-back's low shot was a little too central.

On the other side, 05 goalkeeper Robin Zentner took centre stage several times. First Mané tested the 26-year-old (32'), then five minutes before the break Zentner saved a great chance by Alex Oxlade-Chamberlain (40'), so that it went into the dressing rooms goalless.

In the second half, both coaches started the rotation machine and sent eleven new players onto the field - as is usual in friendly matches. For the Rheinhessen side, U21 European champion Finn Dahmen was in goal, while newcomer Anderson Lucoqui, Jeremiah St. Juste and Leo Barreiro also played 45 minutes.

The first whiff after the restart came from Mainz in the person of Niklas Tauer, who did not fully catch the ball in the Reds' penalty area (47'). Apart from the experienced Divock Origi, the Reds mainly had young players on the pitch in the second 45 minutes. One of them, Kaide Gordon, tested Finn Dahmen after 72 minutes, otherwise little happened in the Mainz penalty area.

Liverpool achieves a stroke of luck

Towards the end of the game, the Zerofivers gained the upper hand more and more and had good opportunities: U23 newcomer Dominik Wanner tried an energetic volley that sailed just over the goal (77'). Three minutes later, Bell also just missed with a header (80').

Shortly before the end of the game, when everything looked like it was going to be a fair draw, the bell suddenly rang again. After a cross from the left side, Luca Kilian deflected the ball into his own goal (86'). Timothé Rupil almost levelled Liverpool's lead just two minutes later, but the 18-year-old's free-kick missed the target by a hair's breadth. In the end, the Premier League team managed to hold on to their narrow lead.

"It was unnecessary to lose the game like that in the end, that annoys me. But the performance was good, especially when you consider how intensively we have trained over the last few days, especially the defensive behaviour," Svensson said after the game.