Zerofivers miss out on home win against Schalke

Both teams labour to a draw on Sunday evening, Mainz's first of the season. 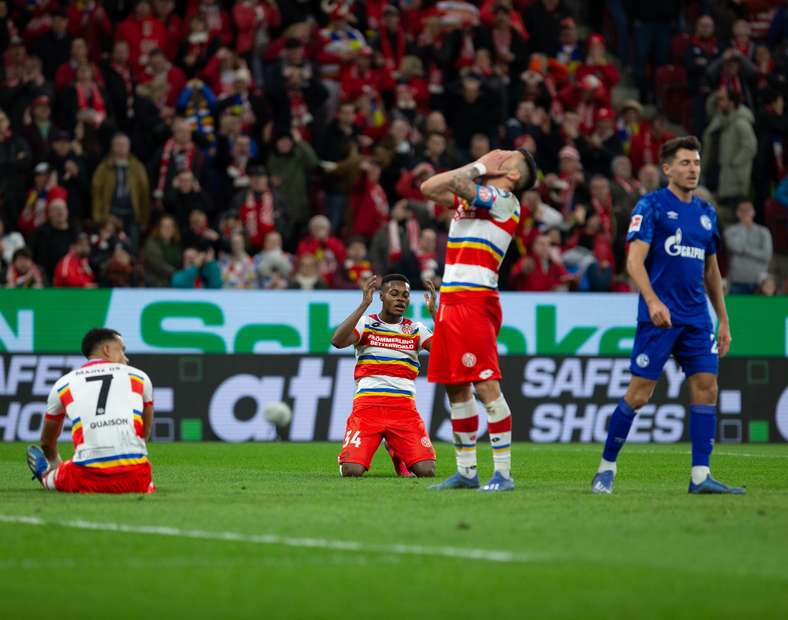 Despite a strong home performance, Mainz could only take a point.

On Matchday 22, the time had finally come. 1. FSV Mainz 05 finally drew a game and shared the evening’s points with Schalke 04. Mainz, who dominated the game for the most part, had many chances, but were unable to actually take the lead that they deserved. The best chance for the home side, playing in their carnival kit to celebrate the upcoming Mainzer Fastnacht, came from Robin Quaison as he struck the crossbar late on.

Achim Beierlorzer made no changes to his side that beat Hertha Berlin 3-1 away last time out. After the pre-match carnival festivities, the teams came out and began the match

Both teams needed a few minutes to acclimatize to the strong winds before the first shot fired in anger from Levin Öztunali went straight at the Schalke keeper. While the guests dawdled on the ball, Öztunali had a second chance three minutes later, which Nübel was again equal to (11’).

The home side began to exert their influence on the game after the first 15 minutes. A pass from Jeffrey Bruma to Robin Quaison came next to Daniel Brosinski, who once more found Adam Szalai. It was only due to a great tackle from Todibo that Szalai was unable to pull the trigger (15’). Meanwhile Robin Zentner was undisturbed in the Mainz goal, and Mainz saw this as an opportunity to tighten the screw. In the 25th minute Danny Latza found Barreiro, whose acrobatic effort went wide of the target. The next effort in front of the away end came from Szalai, who failed to score from 12 yards due to the actions of the Schalke keeper.

The first chance for the away side came in the 34th minute, as Michael Gregoritsch’ flicked effort was well turned behind for a corner by the sprawling Robin Zentner. Zentner was on hand to deny Gregoritsch again, and up the other end Öztunali had a chance of putting the home side ahead, but once more missed from a promising position. The best chance of the first half for the Zerofivers came shortly before the break, as Nübel deflected a cross from Brosinski to the feet of Danny Latza, but the midfielder missed the open net (43’).

Lots of chances, but no goals

After the break, it was the guests who would have the first chance on goal. Weston McKennie found himself with some space, but his shot from the edge of the box sailed wide (49’). During the opening minutes of the second half, it was Schalke who looked to be the more dangerous attacking side, but the guests failed to create any clear-cut chances on goal. Mainz found their way into the match around the hour mark, popping up to threaten in the Schalke penalty box. After a cross from Brosinski, Quaison tried to back-heel in the rebound but saw his attempt saved by Nübel (60’). A few minutes later, Beierlorzer made his first substitution of the night, bringing on Karim Onisiwo, who had come off the bench last weekend in Berlin to set up two goals, for Levin Öztunali (66’). The Austrian didn’t need long to find his feet, winning two corners within minutes. Bruma was able to get a head on one of these set-pieces, but his attempt sailed high over the crossbar (71’). In the closing minutes of the match, Jean-Philippe Mateta came on for Szalai to join Quaison and Onisiwo up front.

Both teams were pushing to score a late winner, but chances were few and far between. Mateta sent a shot over the bar (75’), before Matija Nastasic blocked Quaison’s shot from inside the box (76’). Mainz upped the pressure once again and had a big chance to score the go-ahead goal. Jonjoe Kenny misjudged a throw-in from Baku, allowing Quaison to find space in the box but his attempt sailed past Nübel and hit the woodwork (78’). The guests failed to create any chances in the minutes that followed, as Jeremiah St. Juste sent another shot wide of goal (89’). Schalke came within inches of netting the winner in added time, as McKennie’s free header went just wide of the post.

In the end, it would not have been a deserved victory for the aspiring Europa League side, despite recording 15 shots to Mainz’s eight and having 57% of the ball. The draw means that Mainz now have 22 points to their name and sit in 15th place after 22 matchdays. FSV have also extended the gap to the relegation zone to five points ahead of next weekend’s away game against VfL Wolfsburg.