Zerofivers in disappointing draw with Union

Mainz drew 1-1 in Berlin despite being a man up for the entirety of the second half. 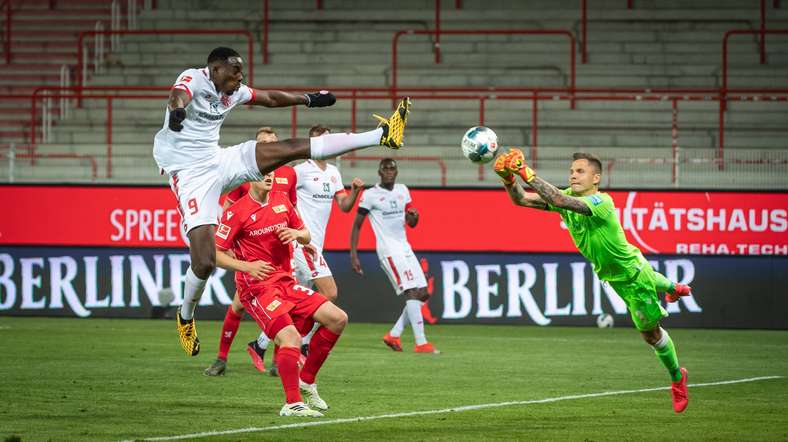 Mainz drew 1-1 in a combative and tiring game.

Despite taking the lead in the first half and having a man advantage for the second half, the Zerofivers were unable to break down Union Berlin’s 10 men and had to settle for a 1-1 draw on Wednesday evening. Ridle Baku put the Zerofivers ahead with a beautiful sweeping shot into the far corner within the opening 15 minutes, but Marcus Ingvartsen equalised for the home team with a free kick that eluded the Mainz goalkeeper. Mainz were the stronger side for much of the tie, but were able to only find flashes of quality against the hard-working Berlin side.

Achim Beierlorzer made three changes to the side that lost to Leipzig last time out, brining in Alex Hack, Taiwo Awoniyi, Leandro Barreiro and Jean-Philippe Mateta, with Jeremiah St. Juste (knee problems), Aaron Martin, Edimilson Fernandes and Karim Onisiwo benched. The head coach set the team up in a 4-2-3-1 formation with captain Moussa Niakhaté at left-back.

Right from the start, Mainz showed that they wanted to do better than last weekend. It was clearly noticeable that Union were shaken following their humbling 4-0 derby defeat against Hertha Berlin, which resulted in some below-par balls and passes. Consequently, not much happened at first, but after twelve minutes,  Barreiro found Baku, who scored to give Mainz the lead. The hosts struggled against the well-organised Mainz side. However, the equaliser was practically handed to the hosts , when Boëtius fouled Christian Gentner just outside of the area, and Ingvartsen floated in a free-kick that deceived Flo Müller in  goal and went in (33').Shortly before the half-time whistle, Union Berlin’s Robert Andrich was sent off for a second bookable offence, and Union would have to play the remainder of the match with ten men.

Despite being a man down, Union had the first chance of the second half with Sebastian Andersson testing Müller from close range (48'). Then, it was time for the Zerofivers to go on the attack. Mateta connected with a Kunde pass, but his shot was blocked by Marvin Friedrich and went out for a corner (51'). The Frenchman came close once again minutes later, but his chip shot landed on the top netting (54'). Union made sure to close the gaps at the back in the moments that followed, and waited to take advantage of their opportunities on the counter-attack. Kunde mustered two attempts, but neither came close to landing on target (57' and 62'). It wasn't until the 70th minute that the by then clearly overpowered Zerofivers would find their way back into their opponent's final third. A last minute clearance kept the Zerofivers at bay (71') before Mateta attempted a back-heel off the subsequent corner kick, which was saved by Rafael Gikiewicz (72'). In the closing stages, Achim Beierlorzer brought on Onisiwo, Dong-Won Ji and Ádám Szalai in order to bulk up their Zerofiver offence, but they were unable to break through the Union defence. The hosts nearly scored a late-winner in the final minutes off another set piece. However, Müller was able to get his arms up in time to block Keven Schlotterbeck's header (89'). Neither team managed to produce any highlight-worthy moments in added time, as the match between the sides finished level at one goal apiece. The Zerofivers will close out their doubleheader week on Saturday afternoon (15:30 CEST) against TSG 1899 Hoffenheim at the OPEL ARENA.