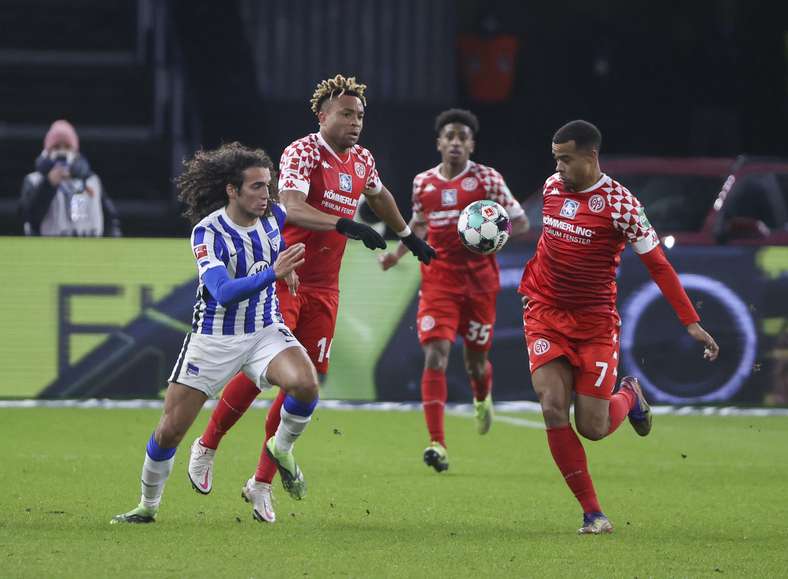 Thanks to their first clean sheet of the season, Mainz 05 earned a point at Hertha BSC on Tuesday evening. The Zerofivers, who had the better chances in the goalless draw, were particularly convincing with a highly concentrated performance in defence. While the point has little impact on the standings, it should be all the more valuable for Mainz's morale ahead of the remaining two competitive games of the year.

As expected, the hosts dominated the game in the early stages, letting the ball and the visitors run, but they knew how to keep Hertha away from their own penalty area and cleverly condense the spaces. The two attackers were also involved in the game against the ball and often started at the halfway line. The Berliners struggled and waited to take the momentum, but had to be patient. The only noteworthy action of the first quarter of an hour resulted from a long-range shot by Lucas Tousart, which, however, landed well over the goal (13'). Mainz, on the other hand, were waiting for a change of pace. And the first promising one came in minute 16: Served by Onisiwo, Aarón had space in the penalty area and should have tried to finish himself, but opted for a low cross that was ultimately cleared. It was an action that showed how things could work if the visitors acted quickly and purposefully.

The first wave of the Berliners, who had unsuccessfully managed to create a clear situation early on, were finally fended off by the Mainzers, the game became more open and the Zerofivers also increasingly had their own ball sequences. Defensively, highly concentrated and offensively, Mainz had the biggest opportunity of the game  five minutes before the break: Edimilson had time to cross on the right, found the advanced Barreiro in the centre, who did not fully catch the ball, but still put it on the crossbar (40'). Bitter for the Rheinhessen, good luck for the hosts and their goalkeeper Alexander Schwolow. A little later, it was time to go to the changing rooms level.

After the restart - both teams continued unchanged. Hertha had more possession, Mainz had the next chance. Barreiro served Onisiwo, who brought the ball sharply in front of goal, where Stöger's shot would have found its way into the net had Deyovaisio Zeefuik not been there at the last moment to clear for a corner. As in the first half, there was little else happening in either penalty area, Mainz did not allow themselves to be tempted and the hosts gritted their teeth against the stable defensive construct of Mainz. It was not a football spectacle in the Olympiastadion, but a highly exciting match between two tactically, extremely disciplined teams. Hertha's first shot on goal after the break was a long time coming and did not bring any real danger because Krzysztof Piatek's header missed the goal by about two metres (69').

Even in the final phase of this match, which had few chances, most of the action took place between the penalty areas and neither team seemed to want to take full risks. On the front line, Burkardt and Mateta were to provide fresh impetus for the Zerofivers in the last ten minutes, replacing the industrious but hapless Onisiwo and Quaison. In the end, this double change did not result in any further chances. After the third draw of the season and Robin Zentner's first clean sheet since the 2-0 win in Dortmund in mid-June, FSV now have six points to their account after the twelfth Matchday. The last two games of the year take place at home on Saturday afternoon (against Werder Bremen) and in a week's time on Wednesday (DFB Cup against VfL Bochum) at the OPEL ARENA.