Working out what went wrong

Mainz head coach Achim Beierlorzer is searching for reasons why his team was so passive against Augsburg. Preparations for the Bundesliga home game against Borussia Dortmund have begun. 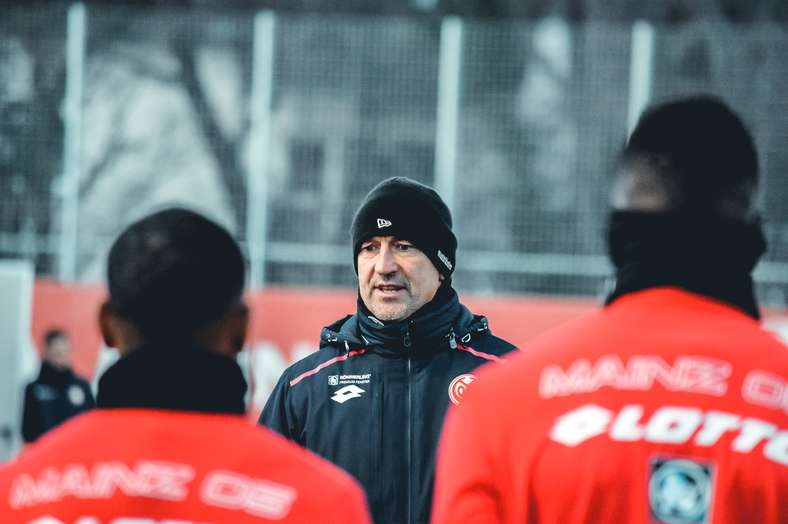 The first workday after the defeat to Augsburg lasted a little longer than usual for FSV’s staff and players. “It takes time to properly evaluate a game like that”, Achim Beierlorzer explained on Tuesday evening after this week’s first training session. Deep video analysis was followed by half an hour of strength and conditioning in the gym, before the players headed out onto the pitch to prepare for the coming home clash with Borussia Dortmund.

In total, the first session of the week lasted around three-and-a-half hours. “It was a big training session”, according to the head coach of the Zerofivers. Beierlorzer said that showing the team exactly what went wrong against Augsburg took time.

“There were some things that we didn’t do well and that we must do better.” Basic errors were made whilst pressing, and the players’ attitude and approach were not good enough, especially in the first half. “The way we ran at the Frankfurt centre backs was amazing. We didn’t do that in Augsburg. We weren’t careful and we didn’t put in enough sprints. The other team did that. We didn’t tackle hard enough, our positioning was poor, and we were indecisive and made too many individual errors.” Beierlorzer explained that he was extremely unsatisfied with how his team defended. “In the run-up to the game, we had said ‘defence first’. Then I guess we couldn’t get our heads in the game.”

Beierlorzer stated that it was a similar story in attack in the first half. “We didn’t get forward enough, didn’t try to penetrate”, said the 52-year-old, who showed his team what might have been had they come into it with the right attitude.  “What Augsburg were doing in attack was practically suicide, because they ended up playing man to man at the back. But we couldn’t take advantage of this, because we weren’t playing our football in the right areas.”

After two impressive outings against Hoffenheim and Frankfurt, the Zerofivers’ head coach has “experienced a different side to this team”. Therefore, questions about the passive first-half performance are being asked at Bruchweg this week. “We didn’t have any chances in the first half, it was even in the second half. When there were only two chances after the break, you can’t say that any team deserved to win”, he said. In the end though, a highly dubious penalty decision meant defeat for the carnival club.

Stamping out a lack of concentration

“Of course you’d like it for the team to fulfil their potential in every outing. But every team is looking for consistency, even the top clubs. We want the squad as a whole, and every individual to find it”, said Beierlorzer, who has begun to go over analysis in individual meetings with the players. After all, the difficulties that Augsburg would present had been discussed in the week preceding the match. “We have to work the personality of each individual, in order to focus their concentration completely on the task at hand.”

A lot of work was also done to improve the Zerofivers’ build-up play. Beierlorzer wants to “get them going forward. We played around with it at the back too much”, the Mainz head coach criticised. “Our ‘keeper was often the one who had to get the ball up the pitch. We have to test our opponents with brave football.” So Beierlorzer gradually increased the size of the playing area as training went on, until the players were using a full-sized pitch. “Passages of play over a whole pitch are obviously the ones that incorporate every aspect of the game”, Beierlorzer explained. The head coach and his assistants have begun to research the peculiarities of Dortmund’s game, and the findings will be worked upon with the players throughout the week.