"WORKING ON KEEPING A POSITIVE ATTITUDE" 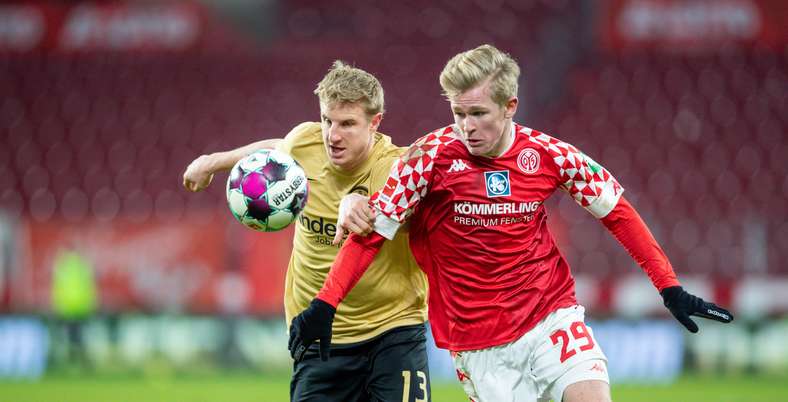 Even a few days after the home defeat in the Rhine-Main duel, Jonny Burkardt's frustration has not been completely digested. Especially because the 20-year-old himself had the equaliser on his head or foot several times, but failed "miserably", as he stated self-critically after the game. After 25 Bundesliga games, the homegrown player has just two goals and one assist to his name. There is room for improvement in terms of numbers and finishing quality, he believes. Nevertheless, the Darmstadt native has been one of the most eye-catching Mainz players in recent weeks and still firmly believes in the team's chances of staying in the league. This weekend, he returns with Mainz to the place where he once celebrated his goal-scoring debut in the top flight.

On the 05 Instagram account, you can see one of the aforementioned situations from behind the goal. To be seen: Burkardt's header against the post. To hear: His verbal reaction, which probably summed up all the anger, coupled with a good portion of frustration, in view of the missed chance and the precarious situation of the Zerofivers. The U21 international wants to avoid similar frustrations as much as possible in the future and increase his efficiency in scoring goals. To improve his personal tally - "because that's already one of my weak points" - but above all to stay in the fight to stay in the league and, together with his team-mates, to continue to believe in the prospect of successfully making up ground. "There are still enough games in which we can score points," he is convinced. Giving up is forbidden! The attacking player, who moved to Bruchweg from SV Darmstadt 98 in 2014, knows that this requires "fight and passion in every game. You have to see from the outside that the team always wants to go all the way, regardless of the result. I think that was at least recognisable at the weekend, even after going down 0-2. We really wanted to score a goal." In the end, however, after a disappointing first half and despite a clear improvement in performance after the break, it did not work out to get the first home win of the season against Frankfurt. So the pressure continues to mount before the trip to Dortmund, where Mainz will be challenged on Saturday afternoon.

The main goal of Burkardt and his team-mates is to "put in a good performance" at the place where he scored his first Bundesliga goal last June. They are all aware that points are needed in view of the fact that they have only scored six points from 15 games so far. "We didn't manage to do it against rivals on a par with us before Christmas and now we have to spring a surprise," Burkardt demands. Whether it's at BVB or in the following week with the two home games against VfL Wolfsburg and Leipzig. Burkardt doesn't want to dwell on last season's 2-0 win, a landmark victory on the way to staying in the league - for a good reason: "It's always one thing, I think: Last week we talked about the victorious games against Frankfurt and we always look back to past successes. We should only look ahead and see how we can win at the weekend. Both teams are at a completely different point now. That's why we only look at the game and new opportunities."

You can only look & learn

From the Mainz player's point of view, one prerequisite in this game will be to let goalscorer Erling Haaland have as few opportunities as possible to score. "He has an insane explosiveness, a very good finish and a strong scoring record. You can only look and learn from that. It will be a decisive factor to have him under control." This also includes preventing Dortmund's midfielders from "running towards our back four with space" as often as possible. These are precisely the situations in which the Norwegian's strengths usually come to the fore. This should also mean a lot of running work for Burkardt and his fellow attackers: Tasks such as compacting spaces, blocking passing lanes, relieving the defence and at the same time setting up chances in front of the opponent's goal should be among the assignments for the Zerofivers.

Confidence from the coach

The Mainz team, led by new head coach Bo Svensson, will be able to fine-tune the final match plan until match day. Incidentally, the new man on the sidelines is very familiar to Burkardt from his time in the academy. And after his first few days with the players, the 20-year-old has nothing but good things to say: "He's good for us and demands a lot of intensity, which you notice in training. He sees that there are many things to improve. If you look at the table, not everything has been good so far. But the coach knows where we have to start." In which direction should it go? "In terms of what to work on, it's compact defending and fast direct play to goal that should set us apart. But that's something we have to develop now, it's not something that happens overnight," Burkardt explains and adds with regard to the head coach: "It's a totally respectful and pleasant interaction and he's also always good for a joke." And Svensson also knows what he has in the homegrown talents in the squad, knows how he has to challenge them and already had uplifting words ready for his striker in the immediate aftermath of the derby: "Jonny is an ambitious boy, he showed his qualities this time as well. Of course he has to score a goal. But he is a young player, he makes mistakes. It's also a learning process for him to deal with that and still try to score the next one. He'll get over it," said the ex-professional, who has no doubts about the well-known strengths of his number 29.

As complicated as the situation may be at the moment with a view to the position in the table; the Zerofivers want to keep their heads up and brace themselves against the opposition that awaits them in the bottom of the table, as Burkardt emphasises. "The coach has not met players with a lot of confidence here. We've lost a lot of games, so our heads go down quickly. But we have to work on keeping our composure, look ahead and try again in the next game, never give up." Attitude, fight and passion: three indispensable ingredients in the context of an arduous, but by no means hopeless undertaking.