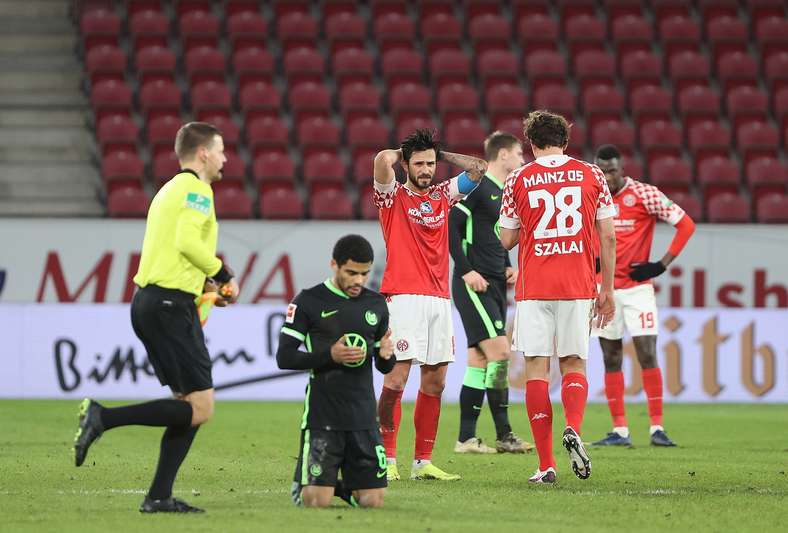 It was a game that did not deserve any goals due to its lack of chances at the OPEL ARENA in the battle between Mainz and VfL Wolfsburg: But because the visitors took advantage of two moments of carelessness on the part of the Zerofivers in the second half and struck through substitute Bartosz Bialek and goalscorer Wout Weghorst, the Mainz side were beaten 2-0 after 90 largely even minutes - and are still waiting for their first home win of the season.

Bo Svensson made one change from the draw with Dortmund, calling up Karim Onisiwo for Robin Quaison to play alongside Jonathan Burkardt.

However, the first shot on goal in an opening phase in which both teams initially felt each other out was taken by the new man after just under six minutes of play, but Onisiwo's attempt landed around two metres wide of the goal. Initially, the disciplined Zerofivers left nothing to chance defensively and had a chance from a set-piece when Alex Hack headed a free-kick from Danny Latza over the bar (12'). Wolfsburg's first attempt then came five minutes later when Leandro Barreiro blocked a shot from 14 metres by former Mainz player Ridle Baku, who had taken to the pitch at the OPEL ARENA for the first time as an opponent (17'). Much of the first half took place in the neutral zone, as both teams defended well and cleverly sealed the spaces. So again a set-piece had to be used to create a goal threat. But Maximilian Arnold's free-kick landed in the side netting but Zentner had it covered (21'). By the time the referee Sören Storks blew his whistle, Moussa Niakhaté (24', past the post) and Baku (35', on the outside of the net) failed with attempts to score for both sides. A short time later, it was time to go the changing rooms 0-0 at half-time.

After 52 minutes, things got really dicey for the first time in front of the Mainz goal when Hack was able to block an attempt by Maximilian Philipp following a corner. Apart from that, there was not much going on, as the ball mostly found its way into the harmless spaces between the two penalty areas, and promising interchanges were often nipped in the bud by tactical fouls. After an hour, Svensson reacted for the first time and brought on Niklas Tauer and new signing Dominik Kohr. The two midfielders replaced Jean-Paul Boëtius and Levin Öztunali. The two were hardly in the game when a moment of inconsistency from Mainz, followed by a flash of inspiration from Wolfsburg, gave the visitors the lead. Phillipp Mwene failed in his attempt to clear the ball out of the danger zone and the ball fell to Arnold, who was quick as a flash and played a pass to Bialek, who had just come on as a substitute. The 19-year-old gave Zentner no chance from ten metres (65'). Would the Zerofivers be able to strike back again?

The head coach reacted and broke up the five-man backline with the substitution of Ádám Szalai for Stefan Bell - the clear signal for a final attack. Instead of the desired chance for a comeback in this match, the visitors took advantage of Mainz's next careless moment and went up 2-0 - the decisive goal. Hack's back pass to Zentner had gone badly wrong and Weghorst thanked him with his chip over Zentner (79'). With this goal, Wolfsburg had finally broken Mainz's spirit in the midst of this exhausting week. While the visitors now managed the result with ease, there was hardly a gap in the visitors' defence until the end of the three-minute injury time. And, because Onisiwo's last-second volley also missed the target, the final score remained 0-2 for Mainz, who will be challenged again on Saturday afternoon at the OPEL ARENA when another top team, RB Leipzig, visits the Rhine.