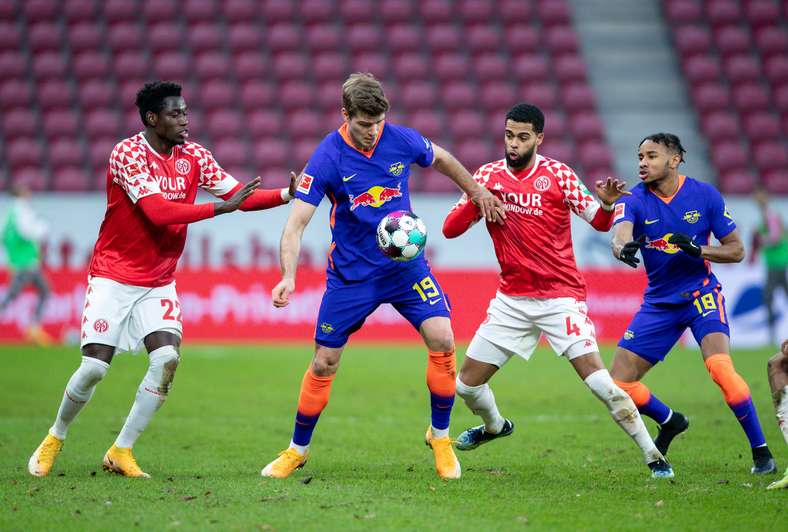 It is hard to imagine the emotions that this performance against Leipzig would have triggered in a packed OPEL ARENA on Saturday afternoon. Bo Svensson had opted for a passionate, courageous and active approach and was rewarded for it. Fighting Mainz gave the second-placed favourites a well-deserved defeat despite trailing twice and proved that they are still a force to be reckoned with in the relegation battle. Provided that Mainz live up to this self-imposed standard in terms of intensity and will in the coming weeks and months. The team has what it takes, as a look at the data after this spectacular 3-2 victory underlines.

The 50th minute was an example of the team's unity. Leandro Barreiro, Mainz's youngster, had just given his team the lead for the first time and was then able to celebrate his first Bundesliga goal, which had been excellently prepared by Danny da Costa (88% of tackles won), who had only signed the day before and was playing very well: Jonathan Burkardt interrupted his warm-up exercises and sprinted halfway across the pitch to congratulate with his former academy team-mate and to join in the red and white jubilation. A goal that released energy. And so, in the remaining 40 minutes (plus a full six minutes of injury time), the Zerofivers did not limit themselves to defending the unexpected lead, but worked Leipzig far away from the dangerous zone around their own goal, where Robin Zentner brilliantly defended the only two promising attempts by Christopher Nkunku (63') and Nordi Mukiele (82').

We wanted to take a little more risk

The Zerofivers didn't allow much more, repeatedly pressed the ball themselves, and ultimately carried the victory over the time in a commanding manner. Stefan Bell, who had organised the defence for the third time in a row, provided an explanation afterwards: "In the second half, we wanted to press a bit more because we didn't have the feeling that Leipzig would have many solutions. We wanted to take more risks and force long balls. That worked well, we made our ball conquests higher and also kept it in the opponent's half. We were just active and that was extremely fun," said the centre-back.

The highly active Mainz team earned three points as well as top scores in terms of running and tackling. One factor: The hosts won eleven balls in the opponent's half, while Leipzig won six. A total of 24 ball conquests in direct tackles meant three more than the usual Bundesliga average per game, while the Zerofivers themselves currently average 19. In another category, which is particularly important for Mainz's typical aggressive style of play, they are in first place in a league comparison and are likely to have extended this lead further against RB: the Red and Whites completed 152 sprints against the ball at the weekend, while their own average here to date was 141. Another exclamation mark and proof of the intensity with which the Rheinhessen team went to work and will continue to do so week after week in the future.

Heart left on the pitch

"We wanted to keep our heart on the pitch, we came back twice and won. A great performance and mentality," double goalscorer Moussa Niakhaté admitted after the game. No sooner said than done. The Frenchman, meanwhile, did not want to dwell on his personal performance, stressing that it was not about individuals but about the club and its fans. "I've been here for two and a half years now and have more responsibility. Accordingly, it's about giving something back to the club. I can do that with goals."

Captain Danny Latza was also enthusiastic and proud of his team's performance after the first home win of the season: "Relief, joy, enthusiasm," the 31-year-old enumerated. "The way we played and fought. The passion, the fight, the team. That gave me a good feeling on the pitch, how we threw ourselves into every tackle and ran after every ball. That was the key today." Exhausted but happy, the Zerofivers were rightly delighted with this extremely successful start to a second half of the season in which they will continue to chase the game.

In terms of quality, there are certainly many things we need to do better

The head coach emphasised in his analysis at the post-match press conference that the team would not rest on its laurels: "At the break it was a lucky draw for us, but in the second half we deserved more. We are really happy about the three points. And that the group has been rewarded for the high effort. In terms of quality, there are certainly many things we have to do better. I can't avoid looking at the table. But it's about working on the things you can influence every day. And that was winning against Leipzig today and is about learning from the game against Leipzig tomorrow," Svensson said. The Dane had explained during his inauguration that there could never be a guarantee of results in Mainz football, but that he always demanded a guarantee of performance. Saturday afternoon impressively proved that performance, in combination with maximum willingness, increases the probability of success. Another important insight of this emotional wake-up call in the OPEL ARENA, where Mainz had not been able to celebrate three points since June last year.