WITH "ENERGY AND DYNAMISM", AND EVEN MORE EFFICIENCY

"Stay greedy", demands sporting director Rouven Schröder of his Mainz colleagues, who have implemented the head coach's instructions to his complete satisfaction over the course of the week heading into the game with Hoffenheim 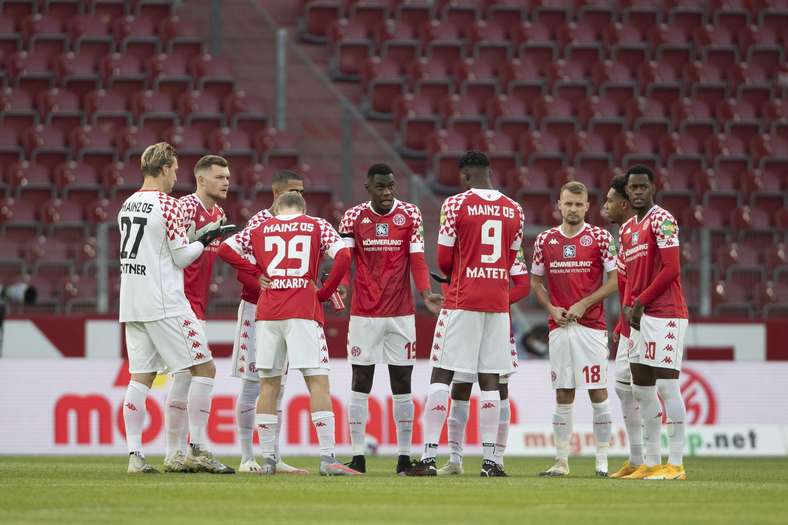 Against Hoffenheim, the Zerofivers want to replicate the performance of last week.

Mainz's players followed the coach's request. According to Jan-Moritz Lichte at the press conference prior to the match with Hoffenheim on Sunday (6pm in the OPEL ARENA), no loss of focus whatsoever could be seen in the days following the first victory of the season at SC Freiburg, as demanded by him at the beginning of the week. "It wasn't much different from the previous weeks, we worked hard, did video sessions. There was no sign that anyone was operating at one or two percent less," the 40-year-old said, expressing his satisfaction with the preparations for the game with the Europa League participants.

With four points from the last two games, no one at Bruchweg would say that the knot in the season has now been broken. Satisfied but focused, the 3-1 win against Freiburg has been reviewed over the past few days, and at the same time it has been repeatedly pointed out that it is only possible for Mainz to continue to be successful in Bundesliga matches in the future with 100 percent commitment and unconditional dedication on the part of every single player. After six opening defeats, the first steps have been taken, the next one towards a positive and, above all, sustainable overall development is to be taken this weekend against the team from the Kraichgau. In a match against a team that qualified early for the knockout round of the Europa League on Thursday evening, but is struggling to get back on track for success in the Bundesliga. TSG's last match against VfB Stuttgart saw a disappointing last-minute equaliser which led to a 3-3 draw. The team has been waiting for a win since the second Matchday, when Hoffenheim raised eyebrows with a 4-1 win over Bayern Munich.

Improve quality in the final third

Hoffenheim's bad run, however, should not play any role in the preparations for Mainz, as Lichte stressed. It is best to only deal with the things that you can control. Which of course includes the analysis of the opponent's strengths and weaknesses (8 points from 8 games): "Hoffenheim has very good, individually strong footballers in its ranks, in addition to an overall plan at a high level", as the 05 head coach observed. "We created individual profiles of each opponent and analysed them together with the team". The goal: "We want to counter with our strengths and win the game."

We have energy and dynamism going forward

One of Mainz's strengths is the increase of creating great opportunities. The statistics show that Mainz is now ranked fifth in the league. The fact that ten teams have nevertheless been more successful than Mainz with ten goals so far proves that there is still room for improvement in terms of efficiency. "We have energy and dynamism in the game, but we must continue to practice our quality in the final third," reminded Lichte and recalled the big chance against Freiburg, when Jean-Philippe Matata's intended cross to Jean-Paul Boëtius in the early stages wasn't accurate enough and the chance was lost.

This does not change the undoubtedly recognisable upward trend of the past few weeks and has a lot to do with the calm that has returned to the Bruchweg area after turbulent weeks around the start of the season and with a team that lives by the team spirit. An impression that was also underlined by the Sporting Director on Thursday: "We questioned things internally, looked at what we could do better ourselves, but held all discussions internally. There were clear words in this joint project", explained Rouven Schröder, but he could not avoid emphasising the importance of sporting success. "You get peace and quiet above all when you are rewarded by the work done in the week and when you climb the table. You can change things with your own performance. We have to keep at it. We want to take the feeling of Sunday with us and remain greedy. Then there is automatically more peace. We need clarity, openness and determination!

The route is clearly mapped out: On Sunday, it is now up to the team, to which the head coach has given his trust at the beginning, to start the game with the same focus as last week in Breisgau and at best to set the course for the first home victory at the fifth attempt this season. Whether captain Danny Latza, who was suspended against Freiburg after his fifth yellow card, will return to the team was left open by Lichte ("He is motivated like everyone else"). The Zerofivers will only have to do without the two injured players Ádám Szalai and Phillipp Mwene.