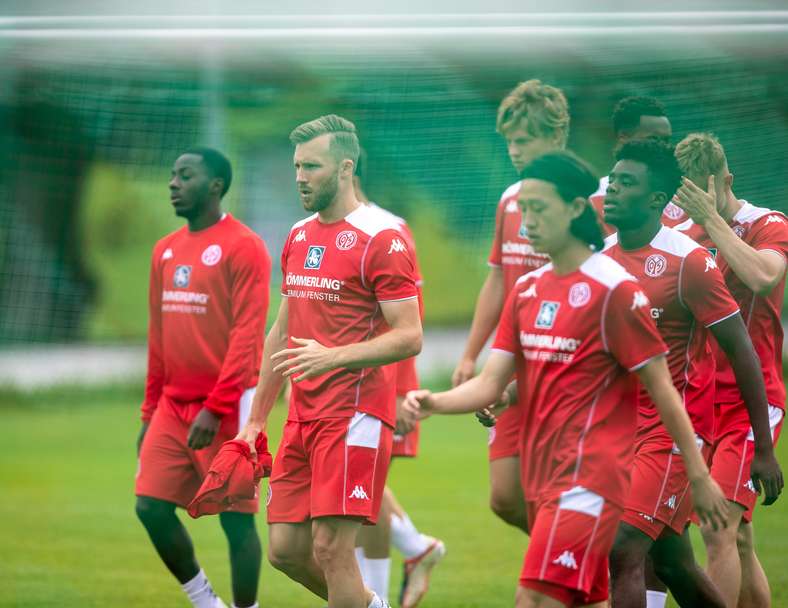 After Bo Svensson had criticised his players on Sunday, not quite agreeing with the quality in the first training session of the day, the Zerofivers showed a reaction. The head coach knew this on Monday afternoon: "They were annoying themselves," the Dane said in retrospect. In the afternoon it was a kind of "will training" for his team. "What we did yesterday was very strenuous. In terms of the workload, it mirrored a whole football match, in terms of the intensive metres we made. Then to come here today - after a day like yesterday - and tone yourself up is good. I'm happy with the quality today."

From a sporting point of view, the training camp will be over with the friendly against Gaziantep FK on Tuesday evening (6pm, live on 05ER.tv), said Svensson in a media round after the morning session. Before that, the Mainz team will complete an athletics programme at the team hotel this afternoon before taking to the training pitch in Schwoich for the last time on Tuesday morning.

Jae-sung Lee will not yet play against the Turkish first division team. Despite his return to team training, it would be too early for him to play, as Svensson explained. "He took the next step today. Let's see if his foot reacts to it. It already looks good how he is moving, but of course he has to continue to catch up physically. We hope it will be quick, but we won't do anything hasty."

Everything goes according to plan

The four European Championship participants Edimilson Fernandes, Karim Onisiwo, Ádám Szalai and Silvan Widmer, who started their preparations later and have been working on their fitness in the past few days, are expected to play in the 05 jersey for the first time this summer. "They are not at 100 per cent, but have improved here. Everything is going according to plan," said the 05 coach.

With just under two weeks to go before the DFB Cup opener at SV Elversberg (8 August, 3.30pm), Svensson also explained what he would be focusing on in the final sessions and in the second friendly of the training camp: "As always, it's about playing against the ball, but we also want to find solutions in possession and activate counter-pressing after losing the ball. Overall, I expect a high, active pressing. We didn't have the energy for that against Liverpool, but we want to put it on the pitch again tomorrow with courage despite tired legs."

This often looks easy, but it can also ring quickly if the ball is not cleared cleanly.

In the Monday morning session, the 41-year-old prepared his team for many of these situations, including having a group "practise procedures in the final third, especially on crosses", while the head coach himself took care of the centre-backs. Svensson sent in rows of crosses in front of the goal, where the defensive specialists were challenged to clear the balls cleanly out of the danger zone. "It was about situations that occur in every game: Crosses from the outside, holding positions, doing the individual job. You move towards the goal and have to clear the ball in another direction. That often looks easy, but it can also ring quickly if the ball is not cleared cleanly. You need automatisms," explained the ex-player, who knows exactly what he is talking about.

In conclusion, the head coach drew a largely positive, and of course still preliminary, conclusion of the training camp in Tyrol. It is a challenge when players start training later. Nevertheless, thanks to the experts around the coaching team, this integration process is going completely smoothly. "We have room for improvement in terms of football, but it is much more important that we have no injuries despite the high intensity of the training camp," he said.