WILL THE NEXT STEP SUCCEED? 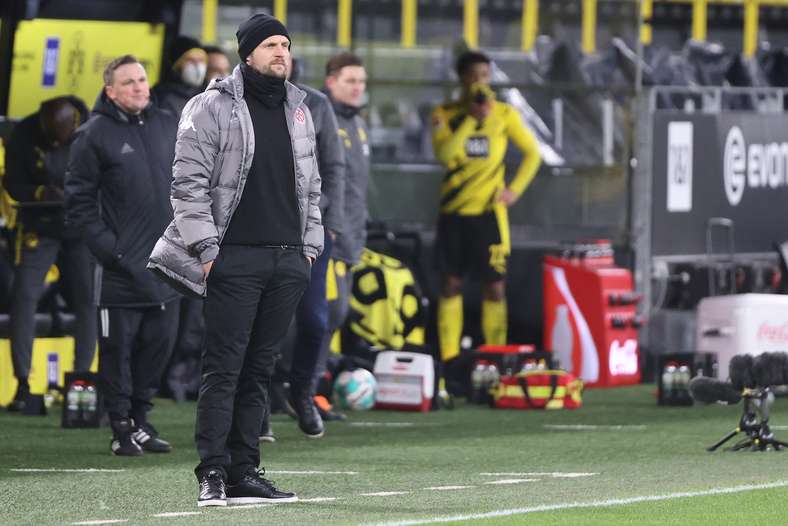 Bo Svensson wants to put the BVB game behind him and build on the performance against VfL Wolfsburg on Tuesday evening.

Bo Svensson described the point gained at Borussia Dortmund as a "step in the right direction" after a thrilling match. A step, no more and no less. Team performance, attitude and the willingness of every single player must serve as a benchmark in the fight to stay in the league. This also applies to the upcoming matches with two top teams at the OPEL ARENA within four days.

Recover, get a good night's sleep, recharge the batteries: Apart from the video analysis and a compact final training session in the evening, Mainz do not have much time to gather fresh strength before the match against VfL Wolfsburg (Tuesday evening 8.30pm CET, live on 05ER.fm). It is therefore a good thing that the Zerofivers were able to recharge their batteries in the recent performance at Signal Iduna Park. A performance that they need to build on. "We are taking a lot with us," said the head coach at the press conference on Monday afternoon. "Above all, the way the team presented itself, the unity to perform as a team until the last second." In the closing stages, the Dane said, his team had "maybe even been the better team" and a tad closer to victory, but ultimately had to settle for Levin Öztunali's dream goal from minute 57 as well as a point for morale despite other good opportunities. "We had a good group on the pitch with a lot of power, they supported each other, had each other's backs. Robin held everything that went his way, we felt good overall," said Stefan Bell after his both surprising and equally extremely solid starting eleven comeback, in which he had helped to ensure that BVB goalscorer Erling Haaland remained quiet.

Better solutions against next top team

Wolfsburg will now travel to the Rhine with an equally high-quality squad and a top-class striker in Wout Weghorst. "Wolfsburg is another top team. They play super football, are well-rehearsed and have good processes," Svensson observed. "In addition, they are always aggressive, play at a fast pace and have physically strong players. It will be a big task to counter and find attacking solutions ourselves." A challenge that is in no way inferior to the one in Dortmund. That's why, looking back on the past weekend, the 05 head coach reported that the team had also been critical of its own performance. One point: the passing rate of 65% - on several occasions, the Zerofivers had let promising counterattacks fizzle out or had lost the ball to the opponent in dangerous areas. Svensson described two reasons as decisive: "You have to differentiate. We played against Dortmund, they counter-press very well. In this respect, we sometimes had a hard time freeing ourselves after winning the ball. Of course, we want to work on finding the right solutions more often in order to play the ball forward longer and more constructively.

I state clearly what is required on and off the pitch

For the reunion with Ridle Baku (Svensson: "We are happy about his development"), who had moved to the north in the summer, Mainz will have to do without Jeremiah St. Juste and Daniel Brosinski - for both it would be too early - and probably even longer without Kunde Malong and Edimilson Fernandes. Apart from that, none of the players who played in Dortmund suffered any injuries, as Svensson reported. After just under two weeks in office, he concluded by talking about his understanding of his role as head coach at Bruchweg and how he intends to fulfil it: "It's always about staying true to yourself and never wanting to impersonate someone else. I say clearly what is required on and off the pitch. But beyond that, it is also important to understand the players and spend time with them. That's my job as coach and leader for this group," said the ex-professional, for whom his team's duel with Wolfsburg should be the next step. In the future, performances like the one against BVB should be the rule rather than the exception in terms of intensity and passion. And they should be the basic prerequisite for fighting their way out of the bottom of the league step by step.