The Swiss newcomer talks about his new club, the European Championship and tactical flexibility after the first few days of training. 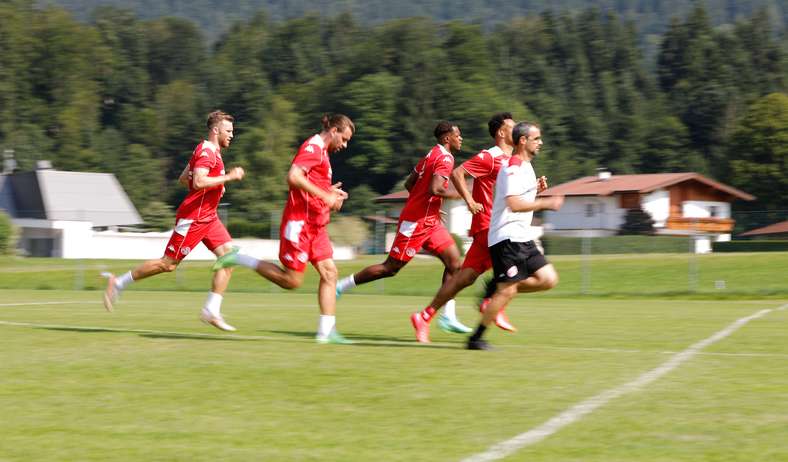 After his extended European Championship holiday, Widmer (left) only completes parts of the team training in Tyrol, while Sven Herzog (Head of Performance) completes a fitness programme with the late starters.

It has been almost two weeks since Silvan Widmer signed a contract with Mainz 05 until 2024. After the second day at the summer training camp in Bad Häring, Austria, the right-back reviewed his first impressions and drew a comparison with the Swiss national team, with whom the 28-year-old had to pull out only in the quarter-finals against Spain after convincing performances at the last European Championship.

Already during the tournament, contact with the Rheinhessen club was intensified, says the compatriot of sporting director Martin Schmidt: "Martin and Bo gave me the feeling right from the start that they wanted me here, which was very important to me. I felt that less at other clubs," explains Widmer, whose decision in favour of Mainz was a conscious one. "I followed an atypical career path to a certain extent, moving to Italy at the age of 20, where I was able to assert myself. Then at 25 I came back to Switzerland. Some people asked themselves: 'What the hell is he doing there? But in retrospect it was a great move. I've been able to develop and play in Europe, I've matured and I was definitely ready to take the step into a big league."

After three days of training, the difference to the Swiss Super League, in which Widmer laced up his football boots for FC Basel for three years, had already become clear. "You can already notice the qualitative difference. The quality - and therefore also the tempo - is somewhat higher in Mainz. You notice that everywhere: the passing, the pressing - everything is much faster."

We want to press high and find the opponent's goal quickly. That suits me very well

The high-intensity style of play of the Zerofivers also played a major role in Widmer's decision in favour of Mainz, in addition to the attraction of the challenge in a new league: "I can make my mark offensively, but at the same time I am needed at the back, which requires a willingness to run, which I certainly bring with me. We want to press high whenever possible and find the opponent's goal quickly. That suits me very well." In recent years, the right-back has played in a four-man backline in Basel, usually in a three-man backline in the national team and in Italy, where Widmer played for Udinese Calcio, both systems were required.

It was precisely this tactical flexibility that made the 28-year-old highly interesting for Mainz. The sporting director did further convincing. "Martin is Swiss, we understand each other. He made it clear to me that they wanted me at all costs, planned with me and told me what to expect if I moved to Mainz. So far, that's exactly what has happened. I've been really well received by the team. It's fun to train and spend time with my new teammates. I feel super comfortable."

As Widmer had made it to the quarter-finals with the Swiss national team at the recent European Championship, the right-back only joined his new comrades at the beginning of the training camp. He does not want to miss the experience he gained at his first major tournament: "We are a great team in Switzerland. Everyone is always really keen to play for the country - we showed that and put it on the pitch. For me, it was the first major tournament, after two previous narrow misses. Now I've been able to play a leading role - of course that brings a lot of experience that I can certainly draw on."

Widmer also sees parallels to Mainz: "Mainz is not a huge club in Germany, but we want to be a team that you extremely dislike playing against. They proved that impressively in the second half of the season, nobody wanted to play against them because they knew it would hurt. That is also the strategy we are following again this season."