"We're not at the beach yet"

Rouven Schröder spoke in a virtual press conference on Monday afternoon about some time away from football, the plans for next season, and the game against Leverkusen on the final day of the season. 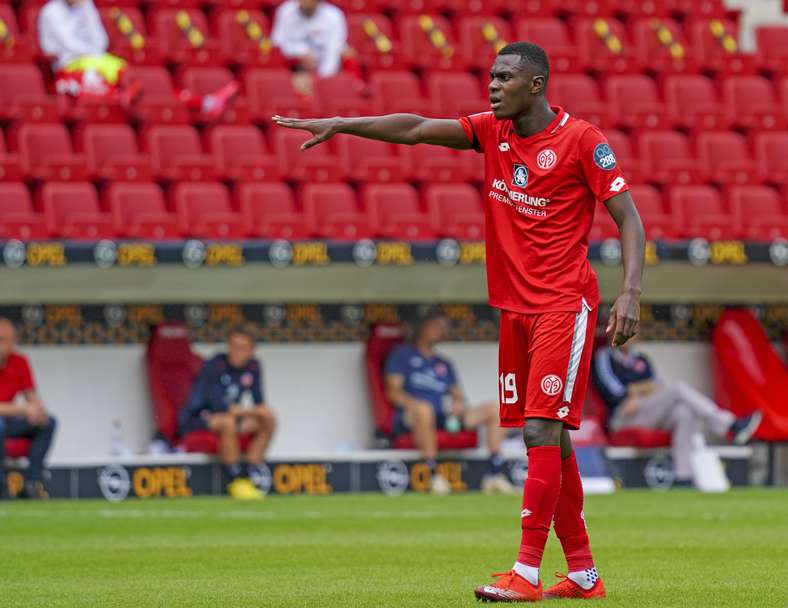 Despite celebrating survival last weekend, Moussa Niakhaté and Co. will want to end the season on a high.

The Mainz players who celebrated staying up in the Bundesliga last week will return to training again on Wednesday to prepare for their final game of the season against Bayer Leverkusen. Rouven Schröder made it clear in a virtual press conference on Monday afternoon that despite the 3-1 win against Werder Bremen guaranteeing the club’s safety, the team would be just as focused as ever. “It’s not only important for the club’s image, but also that we deliver a tip-top-performance against Bayer Leverkusen on Saturday.”

The sporting director was naturally in a good mood, but above all relieved. The 44-year-old used the weekend to get away from the game, as well as the brutal and tough-hearted relegation battle that is now behind him. “I’ve been feeling the heat for the last few weeks. I had to calm down, and there was quite a bit to calm down about,” said Schröder, who took a break on Sunday, as he said, and spent a full day completely out of the world of football and had a carefree day with his partner and children to round off an amazing weekend.

How will the team react?

Just as in previous years, safety ensures planning security for the next season, and the 12th Bundesliga season in a row for Mainz. “But you can’t assume that we’ve only just started planning now that we’re safe. The planning has been going on in the background for the whole time,” said Schröder. “There are things that have been moderated alreay. We’ve said we don’t need to sell a player, but to invest again and perhaps to restructure the squad a little, it will be necessary to set certain things in motion in order to get other things done. The transfer window will begin later, you can feel it. At the moment it’s still very calm. Of course, we also have to have important internal discussions. But we still want to take the game against Leverkusen seriously.“

In the game against fifth-placed Leverkusen, the sporting director wants to, among other things, see how his team will react to the situation of achieving their season’s goal early. “Leverkusen still have a chance to qualify for the Champions League. We want to resist them, collect our findings from this game, and then do a detailed analysis next week,” explained Schröder.

More quotes after Mainz stay up

“We can improve the whole situation”

“This game in Leverkusen is especially important for us, We can still climb the table. Every place higher in the team means more income for the club that we could put to use to improve the whole situation.” The situation that needs to be avoided is one that occurred two years ago, when Mainz stayed up with a game to go after beating Dortmund and Leipzig, then played badly against Bremen. “We were so alert against Leipzig and Dortmund, a couple of players started thinking of the holidays, and then they played like that against Bremen on the final day of the season. As if they were on the beach already,” remembered the sporting director.

It is once again set to be complete concentration on a difficult challenge. “We will tell the team that, but the team made it clear after Saturday’s win that they see Saturday’s win game as essential, so the players can give a good account of themselves at the end of the season.”