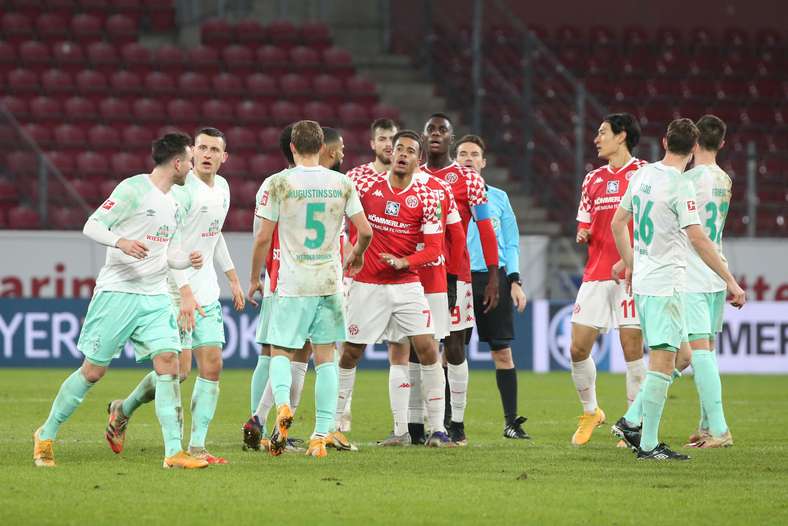 Against Werder Bremen, Mainz 05 had to accept the second bitter 0-1 home defeat in seven days on Saturday afternoon. The game in the OPEL ARENA, in which Mainz had few chances, was impressive defensively but lacked the necessary offensive prowess, especially in the second half, and was ultimately decided in the 90th minute by Werder Bremen sub Eren Dinkci.

The head coach made two changes from the goalless draw at Hertha, bringing back Jean-Philippe Mateta and Jean-Paul Boëtius. Leandro Barreiro and Karim Onisiwo were initially on the bench. In the last Bundesliga match of the year, the Zerofivers set up with a 5-3-2 formation, with Kunde at the six and Boëtius and Stöger as eights in the centre. Mateta and Robin Quaison formed the strike partnership.

The opening minutes were marked by nervousness on both sides, which was reflected not least in simple ball losses and errors. Neither side were able to take advantage of this at first, so clear opportunities were a long time coming. The visitors had the first chance of the half in the ninth minute when Joshua Sargent headed in Yuya Osako's cross, but Robin Zentner had no problems dealing with it. The first chance for the Zerofivers came after 17 minutes when Quaison, on a pass from Kunde, shot from 18 metres, but his attempt was a little too high. Werder continued to have a slight advantage on the pitch, but in the face of Mainz's well-organised defensive work, they rarely found any gaps. While Maximilian Eggestein's shot from the edge of the box was safe for Zentner (23'), things got dicey for the first time three minutes later after a Werder corner: Sargent was completely free, but couldn't convert from six metres, and the Mainz number one made a safe save (26'). In a direct counter-attack, Mateta headed alone towards Jiri Pavlenka, but the goalkeeper picked the ball off the Frenchman's foot in the nick of time (27'). Mainz now made more frequent attacks, while the game gained momentum. First, Pavlenka saved with his fists a powerful shot by Edimilson (30'), on the other side Zentner saved an attempt by Marco Friedl from almost 30 metres (32').

In an encounter which, after a slight initial advantage for the visitors, was now completely on a level playing field, Quaison could have scored the first goal again when, after being played in by Stöger and Mateta, he missed from twelve metres after being blocked decisively by Ömer Toprak (33'). After a few noteworthy final actions , that should have been it by the time the referee Guido Winkmann blew his whistle for the break - with a goalless draw that was fair on balance, the teams went into the changing rooms.

In contrast to the first half, the Zerofivers were the more active team after the restart. In the 49th minute, Edimilson found himself free at the far post after an Aarón cross, but he slipped when trying to shoot, so the promising chance was wasted. Nothing much more happened until the 60th minute as both teams offered little space and neutralised each other again and again. There were increasing signs that the first goal would probably decide this match in the OPEL ARENA. And so the game became a test of patience for Mainz. The next notable scene occurred in front of the home side's goal in minute 67, but Kevin Möhwald's shot landed in the side netting.

The match remained exciting until the final stages, but neither team seemed to come close to scoring a goal. Bremen now had more possession without being able to capitalise on it, and Mainz looked for the counter-attack, which hardly ever presented itself. In the 86th minute, one of the few opportunities to play quickly forward was blocked because the substitute Danny Latza looked for a pass to Quaison, but the Swede could not control the ball. The resulting corner was then knocked on by Hack in front of the goal, where again Quaison was stopped at the last moment (87'). And so it was Werder who finally got the luck just before the end: Tahith Chong crossed after a throw-in from the right, in the penalty area Boëtius lost sight of Dinkci, also a substitute, who put the ball over the line with his head to make it 0-1 (90'). The last chance in the five minutes of injury time came from Karim Onisiwo, whose shot from 20 metres just missed the goal. A little later it was over. After 13 games, the Zerofivers now have six points to their name before the Bundesliga continues after the turn of the year at Bayern Munich on 3 January. Before that, the Mainzers have the chance to reach the last 16 of the DFB Cup against second-division side VfL Bochum on Wednesday evening at the OPEL ARENA.