"We were prepared for this"

Despite a valiant performance in the second half of the season and 13 goals from Zidan, the 2006/07 season ended in heartbreak for Mainz. 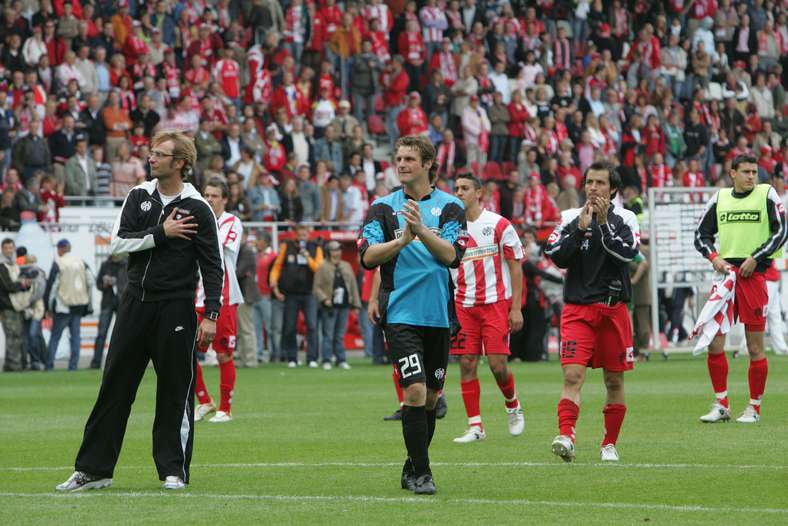 Klopp, Wetklo & Soto upon learning their fate. Two years later, though, Mainz would be back!

Mainz are staying at home. So we have a bit of time to take you through some of the most important events in our club’s history. Today, we’re looking at the 2006/07 season and the bitter disappointment of relegation from the Bundesliga.

One Friday evening in early August 2006, Jürgen Klopp had his first meeting with the club he’d eventually guide to Champions League glory. In preparation for their third season in Germany’s top flight, the Zerofivers took in Liverpool FC in a preseason friendly. Klopp’s side comfortably ran out 5-0 winners against the English giants, and were serenaded by a rather ironic, humorous rendition of “Football’s coming home”, sung gleefully the fans at Bruchweg.

Sobering times after that fiesta of football

The joy wasn’t to last long, and disappoint would soon hang low over the club. It was becoming increasingly clear that Klopp’s planned massive upheaval of the squad, replacing ageing pros with up-and-coming young talents, wouldn’t be completed in time for the return of the Bundesliga. Of the five goalscorers against Liverpool, only Markus Feulner, who joined the club from FC Köln, went on to feature regularly in the first team. The other four, academy graduates Tobias Damm and Fatmir Pupalovic, Chadli Amri and Ranisav Jovanovic, only played a minor role during the season.

Mainz started well in the league, beating VfL Bochum by two goals to won, before winning a hard-fought point away in Dortmund (1-1). But that opening-day victory would be FSV’s only win before the winter break. Klopp tried everything. He moved away from his preferred 4-2-3-1, and went back to the flat 4-4-2 that had served him so well in his early days as a coach. He set up not to lose. This brought the odd draw, but a 4-0 loss to Bayern Munich to end the Hinrunde typified the stuttering and lethargic first half of the 2006/07 season for Mainz. The Mainzer Rhein-Zeitung even proclaimed that “the Mainz mentality is dead”.

The then chief executive of the club Christian Heidel explained that then you are six points adrift at the bottom of the table after 17 games, the conclusion you have to make is that the team, with these performances, isn’t of Bundesliga quality. Heidel confessed that they hadn’t approached the club’s transfer policy had been fruitless and wrong. “We chose not to bring in expensive foreign players, but now we must realise that we haven’t got a chance,” Heidel said. “We don’t have the necessary quality out on the pitch.”

The biggest problem was in attack. With just eleven goals scored in the first half of the season, the Zerofivers were seriously lagging behind their competitors. In Summer, Heidel hadn’t renewed Benjamin Auer’s contract, Michael Thurk went to Eintracht Frankfurt, Mohammed Zidan to Werder Bremen, Niklas Weiland had ended his playing career, while Antonia da Silva and Dennis Weiland had left the club. There were all top players, fit for the Bundesliga. Their successors, players such as Damm, Jovanovic, Bakary Diakhaté, Edu or Claudius Weber, just weren’t capable of matching the levels of other players in the league.

And Heidel got down to business. After long negotiations, Zidan was brought back to the club for a then club-record sum of €2.6 million. “When the call from my agent came, everything was clear. I cried a lot,” said the diminutive Egyptian, who had hardly played in Bremen. “I’m home again now.” While shopping in Bremen, Heidel also bought a midfield goal threat in the shape of Leon Andreasen. Elkin Soto also returned from a long-term injury to strengthen the squad.

Ahead of the start of the Rückrunde, Klopp said “we’ve created the perfect starting position for ourselves. It’s a terrible situation, and expectations are low. Maybe we can just go out there are give it everything.” Andreasen got off to a flier, leading the team to a 1-0 win against Bochum, and then grabbing the only goal in a 1-0 win against Borussia Dortmund. A goalless draw in the derby against Frunkfurt followed, before a legendary encounter with Energie Cottbus, in which Soto ran the show. Andreasen opened the scoring, and a perfect performance was wonderfully rounded off with a Zidan hattrick.

Klopp’s boys were back in the fight. The bottom half of the table with tremendously tight, and the Zerofivers charged into tenth place. But then, the losses returned. Even after a 3-0 home win against last-placed Borussia Mönchengladbach, relegation was confirmed. Just one win would have been enough for survival. All this in spite of Zidan scoring thirteen goals in fourteen games.

Goodbyes to the fans

“We were prepared for this,” Heidel said after the Gladbach game. “We hoped for a miracle that never came. If we must go down, we’ll do down like this: it has been three great, fantastic years for this club. We really enriched the league and will try to get back here.”

The supporters heralded the players and staff, despite the relegation, and showered the team with the utmost affection. For 34 matchdays, Mainz fans had stood by their team, displaying great passion and emotion. Bruchwegstadion was almost always sold out, and always a cauldron of atmosphere. In typical fashion, Klopp managed to find the words to sum up the situation, despite his voice cracking more than a few times. “For us today, the only important things was showing you all how unbelievably brilliant it is, how impressive it is, to be able to do all this for you. You’re the best fans in the world.” The Mainzer Rhein-Zeitung wrote, “even this relegation will go down in the annals of Mainz club history, as a dignified moment. Full of sentiment, not full of tears. The atmosphere at Bruchweg is a good sign for the future.”