Achim Beierlorzer praises his team’s work on their stability at the back. 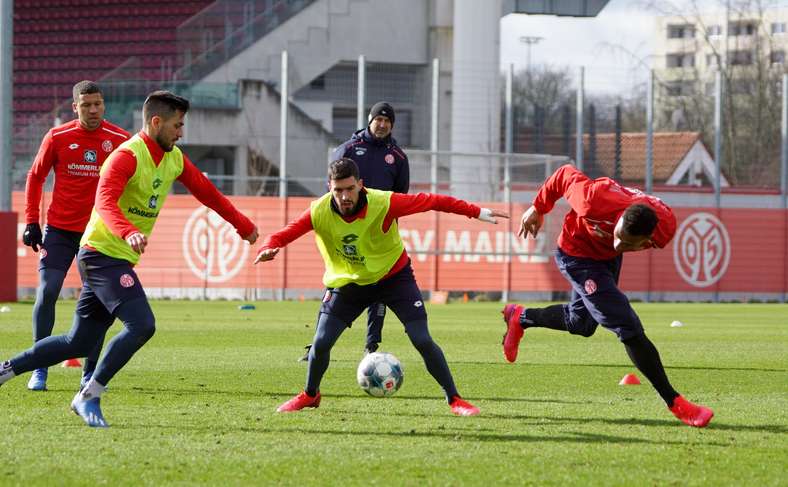 Training ahead of Wolfsburg is underway.

Three days after the 0-0 draw with Schalke, after which mainz were able to build on the gap to the relegation zone (now 5 points), the team has switched focus to their upcoming away game at VfL Wolfsburg. The team are incredibly motivated after two good results in their two latest encounters, but know there is still intense competition ahead. “You can already see it in training, everyone is fighting for a position in the starting XI,” said Beierlorzer.

The Zerofivers coach has put recent good performances down to a new-found defensive stability. He stated that this has happened through shaking things up in the team and creating more competition. “There are so many things that can happen in football that you don’t see coming,” said Beierlorzer. In the game against Bayern, Kunde Malong came off early for Danny Latza, who then went on to combine well in the middle with Leandro Barreiro.

We need the entire team

“Switching to a three at the back formation has consequences all over the pitch, you lose a lot of control in midfield for example,” said the coach. If you only play with one defensive midfielder, you can put someone in the number 10 role, but everyone has adapted so well to their roles recently. “There have been a few players who have come more into the fold recently, who have put in good performances and earned their place.” That just means that those left out must do everything they can to get back in the team.

“We need a complete team so that we are able to feel solid and stable as a group. We had the last chance in the game against Schalke which could have led to three points, but also could have led to us conceding looking back on it. But the game as a whole was more important to how, considering the qualities they have at Schalke and how we dealt with them. It was great for us because we stayed strong at the back didn’t let them in – we have to carry that into the upcoming fixtures. The team deserved to win for the effort that they put in, but this isn’t a wishing well. We managed to get a point and now we’re five clear of the relegation zone. We have to keep working on our stability, we know how we want to play football.”

The 52-year-old spoke about the club being on the right track, on which they have to stay now, “We have to keep picking up points, stay in gear, and keep analysing our own game so that we can keep pushing forward. 22 points is not enough, we’ll definitely get relegated with just 22. We want to go on a run now,” explained Beierlorzer.


A stable defensive structure remains paramount to the team’s success. “We have lots of reliable players. Jeffrey Bruma adds even more stability to our defence with his experience, his play style, his determination and his no-nonsense attitude. That certainly plays a part, along with the two holding midfielders, and how the boys are generally working. They were also working hard before, but were just lacking that little bit of luck. When a team finds themselves playing as we are at the moment, that’s always a positive,” said the head coach. Their recent defensive improvements have been down to a number of aspects, which they have worked on. “Perhaps we also had something to do with stopping Schalke from playing as well as they normally do. It’s always down to cause and effect, which is often something that is overlooked. When your opponent struggles to get into the game, people just say they were poor. You rarely hear that you also played well. We made it incredibly difficult for Schalke. You could see that with Harit, who got really frustrated, or with Raman who struggled to get into the game. It wasn’t just because they didn’t play well, but because we didn’t allow them any space.”

Niko Bungert, Beierlozer’s assistant, laid emphasis on defensive stability during Wednesday’s training session. When asked if the long-standing Mainz centre half would return to the pitch, the 33-year-old replied jokingly, “I better not!” Bungert stepped in to take part in the mini tournament in training due to Bruma sitting out as a precaution, with Stefan Bell and Alex Hack still yet to return to training.

The second, and final public training session ahead of Sunday’s game will take place on Thursday morning (11:00 CET).