"We should be more intense, not less."

Achim Beierlorzer and Rouven Schröder speak ahead of Sunday's game against FC Augsburg. 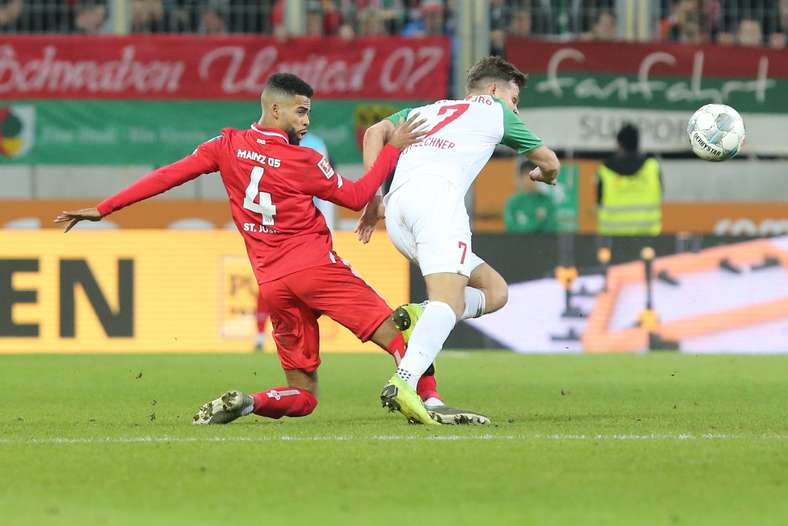 Sunday's opponents Augsburg are only one point above Mainz 05.

Mainz 05 will go into Matchday 31 against FC Augsburg in the OPEL ARENA on Sunday. “We need three points, against a direct competitor. That is all that matters,” said head coach Achim Beierlorzer in the virtual press conference two days before the match. “We still have four games left. The next match is the most important. No theatrics, we just need to do it!”

Don’t be distracted by how the rest of the competition are coping with the relegation battle, but do everything you can to change the club’s situation yourself. That is the message the head coach is sending out ahead of the match on Sunday. “Our fate is in our own hands, and with our performance, our mentality, with everything we can muster, we can stay in this division.”

“We need to take this step.”

FC Augsburg and Union Berlin sit just one point above Mainz 05 in the league table ahead of Sunday’s match. The match itself could end with a Mainz win, whereupon the Zerofivers would leapfrog their opponents and finish the day with 34 points. This is the aim, said Zerofivers sporting director Rouven Schröder. “When the last few games of the season begin, everyone knows what we need to do. Nobody has to tell us where we are. We want to stay consistent, maintain our performance levels, and even increase them higher; really raise the bar. We know what to expect on Sunday: a very, very, strong Augsburg team,” said Schröder. “We want to do everything we can to win this game. We can take this step, we must take this step, and we want to do that too.”

“Nobody has to tell us where we are. We want to stay consistent, maintain our performance levels, and even increase them higher; really raise the bar.”

The team took the first important step with the strong performance in Frankfurt. “Obviously it was good to win, and get a reward for all our hard work. The success was also important as it came as a result of our self-belief in our performance. The team is definitely in this relegation battle. We know what’s what, and we’re going into it with confidence,” emphasised the Mainz head coach, who was not the first to emphasise concentration to his players despite their derby win. We have been focused for weeks, and the squad as a whole is focused on this next challenge, and that’s incredibly important. Now we’re set for another fiery encounter. In Frankfurt we showed exactly the right attitude, which we need to show again this weekend.

Motivated from the negative record.

Augsburg, where new coach Heiko Herrlich replaced former Mainz coach Martin Schmidt some time ago, has traditionally been a particularly difficult opponent. Mainz have lost 5 of their last 6 matches against Augsburg, including DFB-Pokal matches. That should also serve as a motivational tool for the team. “Augsburg play an aggressive press and have fast wingers, as well as experienced strikers, who know where the goal is. They’ve got a lot of experience in midfield as well. Overall, it’s a good team, that offer a lot of challenges, and they are challenges we are ready to tackle,” said Beierlorzer.

Augsburg are also aware of the high stakes. “It’s absolutely a battle between two teams who both want to win.” The Zerofivers head coach expects a fiery game where both teams will have to give everything in ordert o win. “We shouldn’t be less intense than we were against Frankfurt, rather we should be more intense.  Distance, mentality, willingness to fight, assertiveness. These are the attributes which we need to show on the pitch, because we stand to achieve so much in this home game. The team needs to recognise that.”

“We shouldn’t be less intense than we were against Frankfurt, rather we should be more intense.”

The formula is clear: “The spaces are well occupied in our way of playing, and we can put the opponents under a lot of pressure. We also need compactness and stability, as well as the balance between offense and defence. Ideally we want to concede no goals and score at least one.”