“We must be united as one."

New signing Kevin Stöger would like to be on the pitch in a Mainz shirt sooner rather than later, but after three months without training, he knows he must be sensible: ... "I know I'll do everything that is required of me". 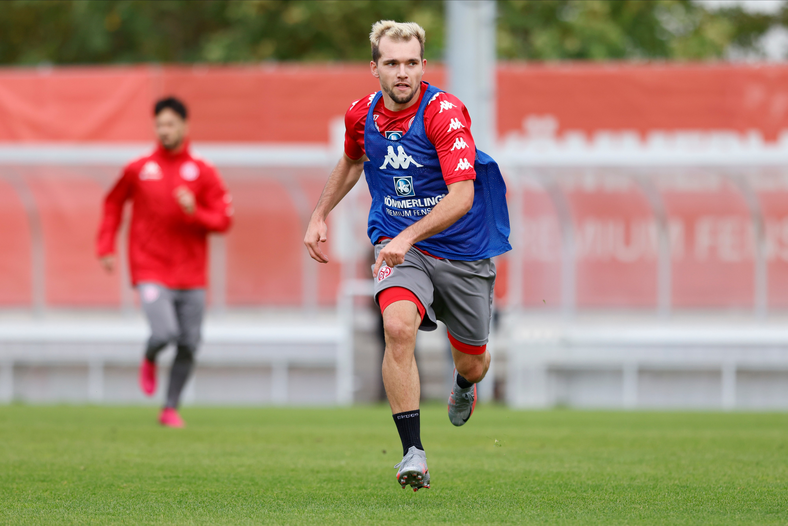 After three months without training, Kevin Stöger is ready to start as a Zerofiver.

On Thursday afternoon, about 24 hours after his signing, Kevin Stöger was missing from the Mainz squad for the friendly against Karlsruher SC. For reasons that are understandable from a player's point of view, although he admits that it is difficult to approach the new start on the breakaway slowly, to let oneself be slowed down here and there in the coming days, to manage the load. "My head tells me, of course, I'd like to be on the pitch tomorrow, or to have played yesterday. But together we have to find the most sensible way and assess how my day to day fitness is developing," reported Stöger on Friday, who has trained on his own since he was relegated with Fortuna Düsseldorf at the end of June.

At first, the former Austrian U21 national team player admits that he had to switch off in the summer. The disappointment after the dramatic relegation with former club Fortuna Düsseldorf on the 34th match of the previous season (0:3 at Union Berlin) was huge, his contract had expired at the same time, due to Fortuna going down. "I had to digest this experience first, switch off from football for a few weeks and not think about what would happen this season". He also enjoyed having more time with his wife and family. Nevertheless, says Stöger, after a few weeks, the moment came when he felt the willingness to talk with new clubs and make the right choice of his next step. "At first, I was relatively relaxed, kept myself fit with a personal trainer, running daily or doing gym work. Things really got tough when the DFB Cup and Bundesliga kicked off again. From that point on, I watched all the games and I have to say that I don't want to experience that a second time. He couldn’t say what he missed the most during this time, but laughingly remarks: "I am just delighted to finally be able to shoot again where there is a goalkeeper". 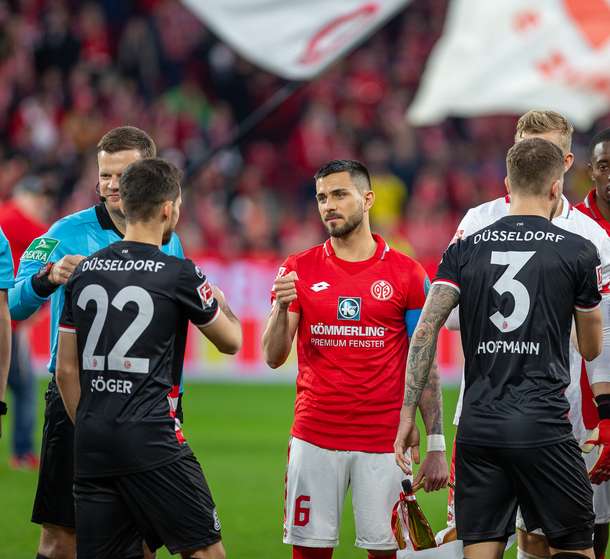 Opponents in March, and now team-mates for two days: Captain Danny Latza with Stöger in March 2020

From then on - not only shooting at a goalkeeper - the legs and head of the 27-year-old midfielder, who can play all positions in the centre and sees his role at the FSV as a "link between offense and defense", were tingling. Although Stöger had to continue to exercise patience even after the start of the season, he now reports that it quickly became clear to him that the Bruchweg was to become his new home, as talks with Sporting Director Rouven Schröder and coach Jan-Moritz Lichte intensified in recent weeks. Despite the turbulences of the recent past? A question that the newest 05 player can answer with a resounding 'yes': "Everyone who is involved in football has of course noticed that there was a lot going on here. But I don't want to have negative thoughts, I want to approach the tasks ahead with positive energy. Moreover, anyone who follows the Bundesliga knows that very good work has been done here over the years. I am looking forward to the task and have been warmly welcomed here. I can say that every wish has been fulfilled in these first few days," says Stöger, who initially stayed in a hotel, but would like to find his own home in Rheinhessen as quickly as possible together with his wife, who is currently still in Düsseldorf.

Arriving at the Bruchweg should be made easier for him, not least by his two compatriots Phillipp Mwene and Karim Onisiwo. He and Onisiwo once spent three years together at the VfB Stuttgart youth boarding school. Another advantage: Stöger is very familiar with football in Germany, has played 42 games in the Bundesliga, and has played 98 times in the second division and 51 times in the third division. He knows what will be needed to score points and help Mainz in the coming weeks: "The quality here is higher than in Düsseldorf," he says looking back.

We only work as a team

With Fortuna, he was able to celebrate staying in the Bundesliga in 2018/19 and had also been on a promising path for a long time in pre-season. "For us it must now be a matter of appearing united. We know that we can only function as a team, as one unit of team, staff and fans. If we succeed in this, we will.