"We made mistakes in the lead up to every single goal”

Rouven Schröder criticizes the Zerofivers’ defensive performance and is expecting a much better display on Wednesday evening at Union Berlin. 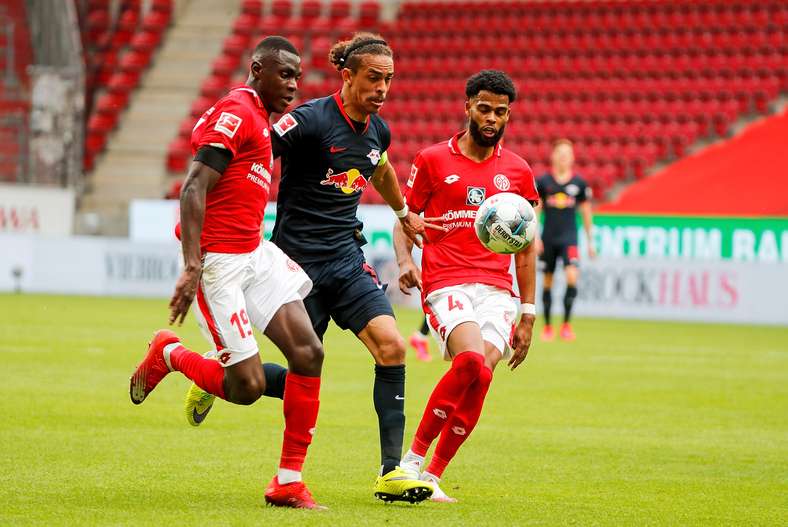 The first game behind closed doors at the OPEL ARENA did not go to plan. 1. FSV Mainz 05 began their doubleheader week with a 5-0 defeat to RB Leipzig, and will have to regroup ahead of Wednesday’s match against Union Berlin (20:30 CEST). “We can be happy that we only conceded five times. There’s not many positives we can take from today,” sporting director Rouven Schröder said after the match.

Earlier this season, the Zerofivers were beaten 8-0 in Leipzig. Despite intending to do better this time around, it was only Leipzig’s finishing that prevented the scoreline from being even higher. “You can take the easy way out and say that Leipzig have a very strong team and were the clear favourites anyways. But, we have to be honest with ourselves. We played our part in allowing that result to happen. We are all very disappointed. It doesn’t sit well with us,” Schröder said after the match. Achim Beierlorzer’s side was unable to showcase any of the mental strength and determination they displayed during last weekend’s comeback draw against Köln.

"There were several areas we focused on, and yet somehow we managed to allow them to score way too easily. That has to be said. It’s very frustrating. As a whole, we have to be better in defence. We made mistakes in the lead up to every single goal, and played right into our opponent’s hands. We weren’t alert and made it too easy for them. That cannot happen. We were too distracted when we had possession,” were just some of the criticisms Schröder had following the game.

Leipzig were able to take advantage of these mistakes early, netting the opening in the 11th minute. Konrad Laimer beat Aarón down the right-hand side before playing a square ball in front of goal, where Jeffrey Bruma was the lone man marking Yussuf Poulsen and Timo Werner. The latter would get on the end of the pass and send it into the far corner. Leipzig would add a second after a Marcel Sabitzer cross found an unmarked Yussuf Poulsen in the box, who was easily able to nod it home. “We played with three centre-backs in order to be able to defend against such scenarios,” said Beierlorzer. “But, on those first two goals there was no one marking in the box. We need to take a look and see who wasn’t doing their job there.” However, Beierlorzer does not believe that the defeat can be blamed on the five-man backline the Zerofivers deployed on Sunday.

“It was an extremely disappointing game from us. After we conceded twice, it was way too easy for our opponents. We never found our way into the game, and never really threatened Leipzig. Our opponents were very aggressive on defence and their counter-attacks were brilliantly played out. We became too passive and allowed them to boss us. We knew what to expect, but couldn’t put our plan into action. There were short phases where we showed flashes of how things could go. But, our best players today couldn’t build on their strong performances thus far and were unable to dictate the game so that we could compete with our opponents,” said the 52-year-old.

"Of course, Leipzig have a lot of individual talent,” said Schröder. “However, their first, second, third and fifth goals were scored way too easily.” Florian Müller’s saves, as well as two blocks from Ridle Baku prevented the scoreline from climbing even higher. Mainz’ only chances of the match came late. Substitute Taiwo Awoniyi looked threatening, as did fellow substitute Jean-Philippe Mateta, who had Mainz’ only real attempt on goal after a cross from Aarón, but his shot sailed wide.

“We need to be critical now. It doesn’t help us to stick our heads in the snad. We need to address what went wrong and definitely need to be better in Berlin. We cannot rely on results from elsewhere, but instead need to play our game and pick up points, which will keep us busy. There’s no question that we have the potential to do so, but we need to make fewer mistakes,” said Schröder.