“We know exactly what to expect”

Ahead of difficult away match against Augsburg, the Zerofivers are looking to build on their recent good form and pick up points – Mateta makes cautious return to team training 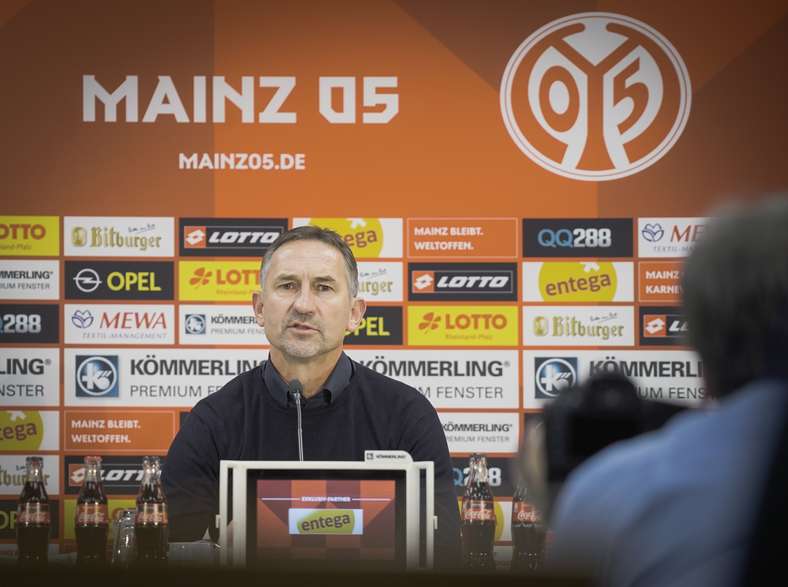 Head coach Achim Beierlorzer speaks at a press conference ahead of the match against Augsburg.

Two wins in the opening two matches under Achim Beierlorzer have brought Mainz some much-needed calm during a rather turbulent start to the season. Now, the next challenge awaits in the form of an away match against FC Augsburg. “We know exactly what to expect and are looking forward to the challenge. Every player on the team knows that it’s possible to win if you put in the right amount of effort, as our last two wins have proved. That’s exactly the mentality we need to put on the table once again,” Achim Beierlorzer said during a pre-match press conference.

Beierlorzer’s side have managed to turn things around in their last two matches, with a 5-1 win in Hoffenheim and a 2-1 win at home in the Rhein-Main Derby. In a weird twist of fate, the Zerofivers managed to deliver two highlight reel worthy performances against those two sides at the end of last season, with a win in Frankfurt before a wild comeback victory in the OPEL ARENA against Hoffenheim. All of these matches serve as an example of what Beierlorzer is looking to see from his side, as he gets set to face Augsburg for the first time in the Bundesliga as a head coach.

Take advantage of the chances on offer

“We will have to take advantage of the chances that come our way,” said Beierlorzer. “We need to keep the tempo high. We’ve seen that when we play high-intensity football, that other teams have a hard time keeping up. The opposite is also true: when we’re too slow, don’t make enough sprints up front and lack that overall intensity, that’s when we make mistakes. We cannot allow that to happen.”

Mainz completed 312 sprints and covered a combined distance of 122 kilometres against Frankfurt. Both stats help prove the level of effort the Zerofivers put in on their way to taking home all three points. As a result, the team took part in recovery training until Thursday at the Bruchweg. “It may have seemed a bit odd to some that we added an extra day off. But, after such an intense effort, it’s important that we take the time to clear our heads, and take advantage of a short break. I’m convinced that it’s done us a world of good,” said Beierlorzer.

Mainz will be faced with a tough challenge as they get set to face Augsburg and former Zerofiver head coach Martin Schmidt. “In their last match, they remained disciplined and were strong in their tackles. Augsburg are especially tough to face at home, and are willing to put in the miles. They will not make things easy for us,” said Beierlorzer. “Augsburg have been able to pick up points in several of their last matches, and are looking to add more. We want to continue where we left off. This will be a meeting between two sides that will each give it their all.”

Mainz have been waiting to find their groove all season. As such, it’s important that the team not break the current momentum and to avoid making any sudden changes to the training sessions and the overall approach. “We’ve been able to pick up some confidence from our success as a team. In the same sense that you can have a downward spiral, you can also go through an upward trend. You can feel that there’s a sense of euphoria within the team, in terms of what’s currently happening on the training ground. We want to take all these small details we’ve been working on and apply them to this difficult match.”

One thing that could be helping lift the mood within the Mainz camp is the return of Jean-Philippe Mateta. The striker, who suffered a knee injury during the summer, made his return to team training and took part in some keep-away drills during training. As of Thursday, the Frenchman will take his first cautious steps towards a full return to team training. “It was great to see how happy he was. We hope that Stefan Bell and Dong-Won Ji will also be able to take similar steps in their recovery process ahead of the winter break,” said Beierlorzer.