We deserved a point

Robin Zentner was disappointed after the unlucky late 1-0 defeat to finish the year – Öztunali: “We should have been smarter” 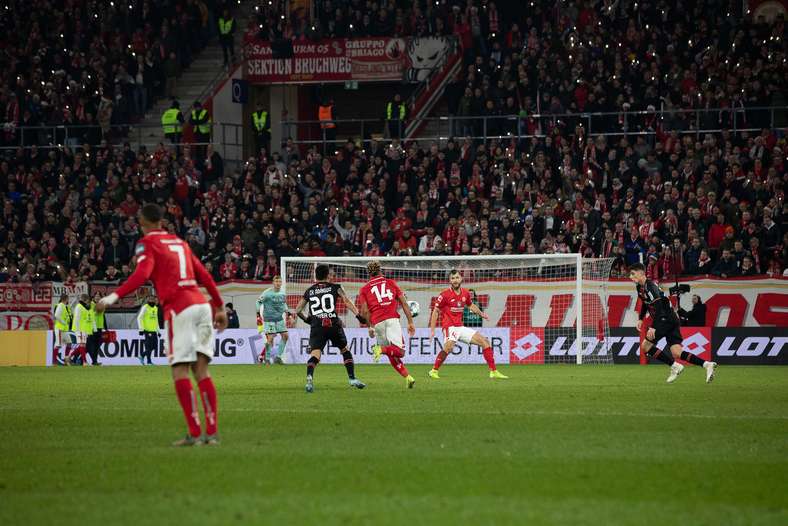 The Christmas spirit was clear to be seen in the Opel area: fans turned on their flashlights on their phones and began to sing their rendition of “Last Christmas”, practiced in last season’s 1-1 draw with Hoffenheim. However, the good feeling was spoiled by a late counter-attack by the visitors, earning them a 1-0 win over the Zerofivers in the final game of the calendar year. “Angry, annoyed, disappointed. These are the words that spring to mind,” said an upset Robin Zentner.

The Mainz goalkeeper was feeling anything but festive after the game. “It’s a defeat that will be stuck in my head for a while, but we have lots of time now to digest the result,” said the 25-year-old with a hint of sarcasm. Preparations for the second half of the season will begin on 3rd January (15:00 CET) for Zentner and the rest of the squad. Mainz finish the Hinrunde in 14th place with 18 points, level on points with Eintracht Frankfurt in 13th.

Robin Zentner almost saved the day with a crucial save after Kai Havertz latched onto Moussa Niakhaté’s misplaced pass. The German international played through Kevin Volland who failed to make the most of his one-on-one situation as he was thwarted by the onrushing Robin Zentner in the Mainz goal. However, Volland was unfortunately first to the rebound and managed to lay the ball across the goal for Alario to easily tap home the winner.

“We need to learn to play the simple ball. We also need to make better use of the wide areas. We made some really bad decisions; not just for that one counter attack but at numerous times throughout the match. And that certainly shouldn’t happen in injury time when we’re at home and controlling the game. That’s something we need to understand,” said the frustrated goalkeeper. “I thought we played really well but came away empty handed. When the ball just isn’t going in for you, it’s important to keep tight at the back and take the point. We didn’t manage to do that because we wanted to get the win. It’s really frustrating because we had it in our hands. We’ve shown that we can perform well against top quality opposition,” said Zentner, whose conclusion was clear: “We need to learn that sometimes you should just take the point.”

The Zerofivers created more than enough chances to get the win against a strong Leverkusen side. Ádám Szalai had a great chance to open the scoring in the 17th minute but couldn’t keep his effort down from Aaron’s well-timed cross. Robin Quaison also came close for the hosts, narrowly missing by a few inches. There were then a flurry of chances after Wendell was shown a second yellow for hacking down Levin Öztunali on the counter attack.

“JP said he didn’t see him”

Jean-Philippe Mateta then let another huge chance go begging, when it perhaps would have been better to play in the unmarked Robin Quaison. “JP said he didn’t see him,” the Mainz head coach said shortly after the game. The Zerofivers certainly created enough chances to deserve the win in the end.

“We have to put the game to bed,” Öztunali said after the game. “We were desperate to score but we should have made better decisions in the final third. And also we shouldn’t have let that counter attack happen.” The 1-0 loss in the final game of the year has somewhat damped the mood a bit, but Rouven Schröder is still looking on the bright side. “It’s clear to see that the team is on the right track. You can see time and time again just how much potential there is,” said the sporting director. “This gives us a lot of confidence to start the second half of the season afresh after some focused preparations.”