"We couldn’t have made it any clearer"

Beierlorzer told Awoniyi: "You are a striker!" – The Zerofivers coach wants to play on the front foot and demands more goals from the chances the team creates. 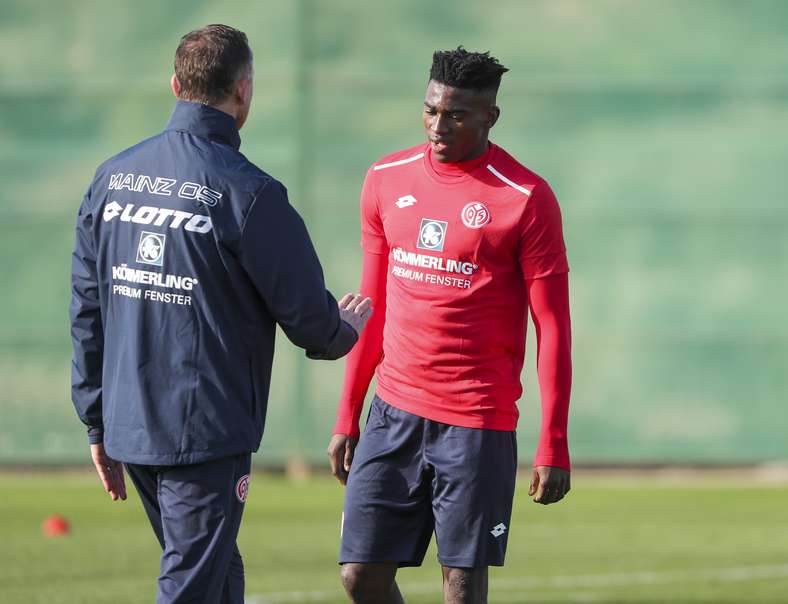 Achim Beierlorzer’s boys trained as planned for 90 minutes in the small athletic hall of the training facility, continuing their warm up for the season. In terms of content, the focus was not only on working on speed and dynamics, but also on positioning, including goal scoring. Shortly before the end of the tournament, the training area was noisy. Striker Taiwo Awoniyi was suffering.

The arrival stresses had already gotten out of their system after a recovery set on Sunday afternoon, so the team went full throttle after the first breakfast in the winter training camp on the Costa del Sol. The intensive warm-up program should provoke even more depth in the attacking game.

Playing in the best conditions, the 23 travelling field players and the three goalkeepers looked great and the mood amongst the entire camp was excellent.

You are a striker!

There were plenty of beautiful moves on display throughout the training session which ended with a lot of goals: After a return pass from Ronaël Pierre-Gabriel from the right wing, Liverpool loanee Awoniyi decided against the shot from 12 yards and instead decided to play the ball to a teammate. The ball was blocked by the defender, however, and the coach was less than thrilled, but saw it as a teachable moment. "Never,” said Beierlorzer immediately following the play. "You are a striker,” He reminded the 22-year-old, who he hugged after the end of the session and gave plenty of encouragement. Overall the team looked great though, and this was merely a learning curve for a young player.

Laying the foundation for the second half of the season

After the session, Awoniyi was initially the central topic in a conversation with a journalist, but Beierlorzer was given the opportunity to go into his idea of ​​the game: “Criticism is part of my job,” he said. "We want to play clearly, decisively and we want to score goals. As a striker it makes no sense to be passing the ball 12 yards from goal. Overall, I see no problem with us, but we’ll continue to put in the work. If you have the chance, you have to shoot, because this game is about scoring goals." Goals are the difference between winning and losing games at this level as the coach well knows, and the one week stay in Spain offers him the chance to really unload some of his extensive knowledge on the players. And so the basis should therefore be laid out for the players to have a successful Rückrunde and end up staying in this league.

"Criticism is meant to improve players, and Taiwo has everything he needs to be a great player in this game. He has great stature, excellent athleticism and speed. Everything he needs, all he has to add now is a little effectiveness and a few goals – we’re working on that." The coach’s aim heading in to the second half of the season is to be more dangerous in front of goal, and he cited several situations from the Hinrunde to back it up. For example, he wants the team to play in more crosses, like the ones that forced goals against Hoffenheim and Bremen. He also wants to have more shots, even ones like Jeremiah St. Juste’s shot against Frankfurt which deflected in off Karim Onisiwo and laid the foundation for a derby win. He wanted to prove that things can happen when you have a go, and sometimes you get the luck you need. "There is no better way to illustrate that this makes sense and leads to success." Without crosses, there’ll be no shots - without shots, no danger of scoring.

After the second session of the day in the late afternoon, the Zerofivers await the first of two friendlies in Andalusia on Tuesday (4 p.m., live on 05ER.tv). The opponents are the Dutch first division club FC Emmen. This game will offer Awoniyi, who hasn’t scored in any of his six Bundesliga games so far, a quick opportunity to demonstrate his ability to learn.