"We can be proud of this” 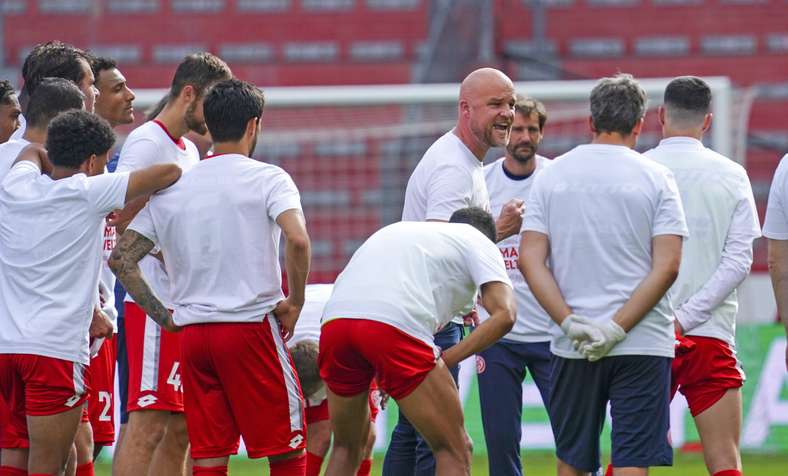 Schröder: "Today, we showed who we are!”

1.FSV Mainz 05 can start planning for their 12th straight season of Bundesliga football at the OPEL ARENA. Achim Beierlorzer’s side followed up a 2-0 victory in Dortmund with a win in their final home game of the season and are now mathematically safe. “Done and dusted,” said Beierlorzer after a 3-1 win against Werder Bremen took his side up into 13th place.

The Zerofivers couldn’t contain themselves after referee Manuel Gräfe blew the final whistle to bring the match to an end. Bremen, who had hoped to be leaving with three points in hand, had to instead make their way to the dressing room. Meanwhile, Mainz remained on the pitch, hugging and enjoying the moment. In front of the empty stands, bereft of the fans that would normally be celebrating yesterday’s feat with applause and cheers, it was left up to the players and staff to do so on their own.

The tension that had resulted from weeks of highs and lows was finally released. Rouven Schröder gathered the team and delivered a speech that harkened back to Jürgen Klopp’s speech nearly 16 years ago, when Mainz’s Bundesliga adventure first began.

T-shirts to commemorate the moment

"Today we showed who we are!” yelled Schröder. “Our identity. We are one team. We did this by ourselves on the pitch. All for one. We stayed up. Everyone else had already written us off. Not a chance. We are staying up because we’re good, because we’re talented, because we’re experienced, because we’re a team. No matter what. Mainz 05 is the only thing that matters. I’m proud of you.” The rest of his words were drowned out by loud cheers from the players, coaches, support staff and club employees.

"I was overcome by emotion because we achieved something,” Schröder said afterwards. “It was just an amazing feeling. We went through so many lows and had so much being said about us. Of course, some of the criticism was justified. But, we never lost hope. Everyone who works for this club does so with 100 percent passion, I won’t allow anyone to deny that. We can be proud of that. Others become champions year after year, we stay up year after year.” The white shirts that team manager Darius Seibert distributed after the game reflected this statement: ‘8x champions? Boring! 11x staying up? A Mainz world class. 1x celebrating without you? Extremely painful!’

Despite a 3-1 win in the end, the game was marked by several tough phases, in which Mainz required a spot of luck and an on-alert goalkeeper. “We didn’t get off to an ideal start,” said Beierlorzer. Florian Müller was called upon to make two crucial saves before the Zerofivers started to find their way into the match and began to direct the flow of play.

Robin Quaison’s header (Beierlorzer: “Extremely helpful”) opened the scoring, before Jean-Paul Boëtius added a second (“beautifully played out”). Danny Latza’s solo run started the attack before he set up the goal with some brilliant footwork. Mainz faded a bit at the start of the second half, as Bremen were able to get one back. But, Ridle Baku’s long ball then found Edimilson Fernandes who had sprinted forward from midfield and put the ball in the back of the net. Alexander Hack was then brought on as an additional centre-back to help ensure that there would be no more breakthroughs at the back. Overall, the Zerofivers had the better chances on the day and deservedly won.

“It was a match point for us, which we won. It wasn’t like in tennis, where a serve and a volley win you the point. We did it through 97 minutes of hard work. The team deserves a lot of praise for their mentality, and for the desire they displayed. We did it,” said Beierlorzer. He added that managing to secure safety with one game to go was a difficult task for him and the team, especially in the midst of a hard-fought relegation battle. “I feel tired, I have to say. But, I’m extremely happy and am very glad that we don’t have to live with the stress of checking the other results on the final matchday,” he said.