"We are on the right track"

A second victory in two games under Achim Beierlorzer: another success at home in the Derby against Eintracht Frankfurt. 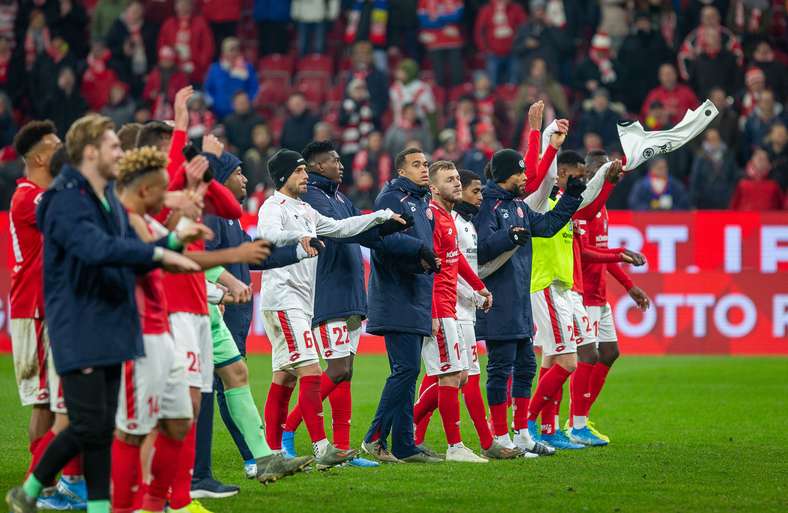 Scenes of jubilation after the victory in the Derby: FSV grabbed a second win in a row against Frankfurt.

Eintracht Frankfurt were once again unsuccessful in Mainz; twelve times they have come here, not once have they returned home with a win. The Zerofivers, on the other hand, celebrated their second success in as many games under new head coach Achim Beierlorzer. “We are really happy to get these three points. They are worth their weight in gold. We are on the right track, and we want to continue down this road”, Beierlorzer said after the match.

It was a Derby that gave the spectators in an almost sold-out OPEL ARENA everything that they could have hoped for. Fight, passion, emotion. It was nervy 90 minutes of football and, from a Mainz point of view, a brilliant finish. Coming back from 1-0 down to move to twelfth in the table on 15 points was exactly the early Christmas present every Zerofiver would have wanted.

Öztunali fouled by the last man

When referee Manuel Gräfe blew the final whistle after four minutes of added time, the relief around the ground was palpable. Eintracht threw everything at it in the closing stages of the match, despite have been a man down for the entirety of the second half. Dominik Kohr took his chances and brought Levin Öztunali down, with the Mainz through on goal and with a clear goalscoring opportunity. Kohr was rightfully sent off for what was a professional foul. In the closing moments, Mainz missed a few chances to put the game to bed on the break.

“It was all a bit hectic at the end”, Beierlorzer said in his post-match interview. “Not only on the pitch, but for everyone in the stadium. As a head coach you of course want your team to kill the game off with a counterattack, like we did against Hoffenheim. We didn’t manage it. So we had to wait nervously for the game to end and the win to be confirmed.” Robin Zentner again proved to be Mainz’ saviour, denying the away side a very late equaliser. Aarón martin also provided a crucial defensive contribution, making a textbook tackle on the edge of the 18-yard box. At the other end, Öztunali and substitute Daniel Brosinksi both missed great opportunities to make it a much more comfortable finish. “We lost possession too easily there, when we really should have held onto it. A final knock-out blow would have put our nerves at ease”, said the Zerofivers’ head coach.

The 52-year-old spoke about it being a deserved victory, “because the team played some great football in the first 20 minutes of the second half. We ran hard. That is valuable and it showed that the team really wanted it, they wanted to complete the comeback.” In what was an exciting game, both teams largely cancelled each other out before the break, save for one lapse in concentration at a corner, which saw Martin Hinteregger put the guests up by a goal to nil. “That hurt us. We were in the game, it was an even match and we had our moments. Frankfurt defended really well and you could see how dangerous they are when they are breaking at you, because they do it at speed”, Beierlorzer explained. “We spoke about this at half time and about what we would bring out onto the pitch after the break. Even the disallowed goal gave is the confidence to go on and win it.”

In the 50th minute, Jeremiah St. Juste fired the ball goalwards, Onisiwo stuck his boot on it and deflected it into Rönnow’s net. Onisiwo’s apparent equaliser just three minutes later was chalked off by VAR, as the ball had gone out of play as Aarón sought to work room for the cross. It was Ádám Szalai, who provided the winner for Mainz, despite Eintracht’s attempts to deny all three points to the home side. “It wasn’t fun at the end. They had a lot of fight left”, said Beierlorzer, who had wanted his team to be calmer in possession. However, according to Beierlorzer, the fact that the team turned the game on its head with such power, says a lot about how prepared they were.

“If we finish one of these counters, then it is all over. But it didn’t go down that way, so we had to defend resolutely until the final whistle. And the boys did it really well.” The Mainz head coach said that the team are doing more things right than wrong at the moment. “I think it’s great that the team is taking on so much. The boys have this way of defending at speed against the ball and getting up the pitch and they want to do this a lot.”