VOICES FROM THE BREISGAU: CONVINCING AS A UNIT

Relief after the first win of the season 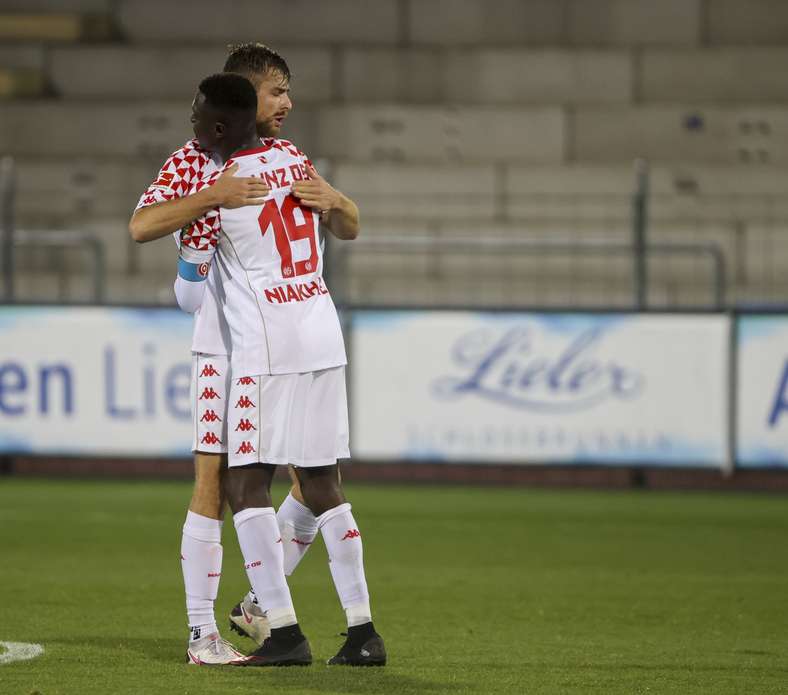 Relief after the final whistle was also felt by defenders Alexander Hack and vice-captain Moussa Niakhaté, who put in a solid performance.

Jean-Philippe Mateta has scored two hat-tricks in the Bundesliga and twice his opponent was Freiburg. The goalscorer was asked whether the Breisgau team were his favourite opponents after the first win of the season, but he didn't put too much importance on these statistics. Much more important, according to the Frenchman, were the three points for the team. Mainz convinced as a unit in Breisgau, which was also pointed out by other key players after the final whistle in the Schwarzwald-Stadion. Against Hoffenheim, it is now important to build on this and, according to the sporting director, to develop the greed "to have this feeling more often".

THE VOICES OF THE GAME

Jean-Philippe Mateta: "I don't know if Freiburg are my favourite opponents, but I scored three goals and I'm very happy about that. But more important were the three points for the team, we won the game together. We've been playing better and better over the last few weeks and we want to keep improving against Hoffenheim."

...we must seize our opportunities, with conviction

Jean-Paul Boëtius: "The feeling today is great. We must maintain what we have done today. We believed in our strength, everyone fought for each other, that is what Mainz 05 is all about. We were also very efficient, so we must seize our opportunities, with conviction."

Alexander Hack: "We have worked very well over the last few weeks and today we all achieved 100 percent performance. After the game it feels very good to win again after such a long time. After the break we might have missed the chance to seal the game, but we defended well and kept them at bay. Everyone who came off the bench gave us energy today, that is important for us."

Rouven Schröder: "It's a relief for the club and the fans who kept their fingers crossed for us and are crossing their fingers in a difficult time. It is definitely liberating. We deserved to win and played a very strong first half, in which we could have even scored one or two more goals. We must develop the greed to have that feeling more often. It's worth working for, that was shown by everyone today. JP was so cool in front of goal and is working hard on everything, we need a goalscorer like that."

Jan-Moritz Lichte: "If you lead 3-0 at the break, you have of course done a lot right. Nevertheless, we were aware that Freiburg can get another chance if they score a goal. We allowed few chances after they made it 1-3 but we go home with the feeling that this victory is deserved. We are very satisfied."