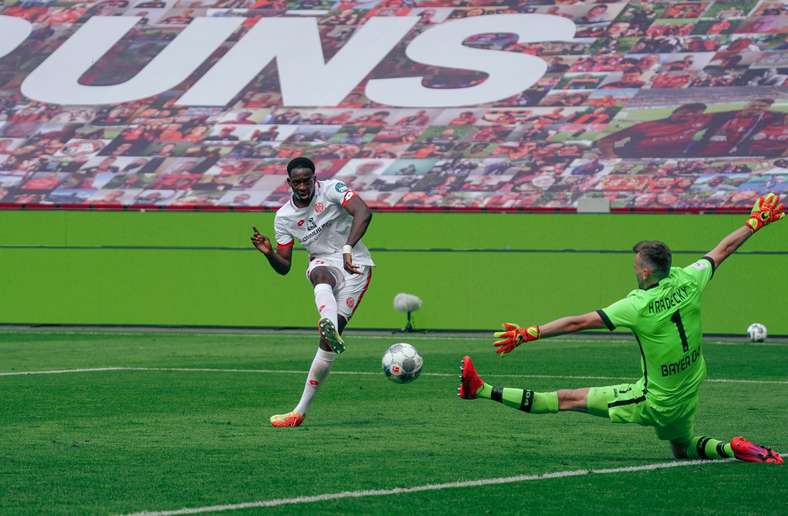 Mateta had Hradecky beaten, however he was stood in an offside position as the pass was played through to him.

FSV Mainz 05 miss the chance to move even further up the table on the final day of the season and end their 2019/20 Bundesliga campaign in 13th place. Achim Beierlozer’s side head into the summer break on a total of 37 points after the 1-0 defeat against Bayer 04 Leverkusen. “Defeats hurt, even when it doesn’t affect your overall goal,” said the head coach. “We wanted to achieve maximum points on the last day. Unfortunately, we failed to do that.”

The Zerofivers suffered a 1-0 defeat at the hands of the Werkself for the second time this season. Peter Bozs’s side stole the victory in added time at the OPEL ARENA in the reverse fixture earlier on this season. This time, however, it took just 68 seconds for the visitors to score that all-important goal. “Against teams like that you have to be alert from the start,” said a disappointed Rouven Schröder. “Unfortunately, we didn’t manage to do that.”

“It could have been avoided”

It was Aarón who made the crucial mistake, losing a challenge with Florian Wirtz, who then laid the ball off for Nadim Amiri, whose resulting pass deflected off Jeremiah St. Juste and into the path of a gracious Kevin Volland. “It could have been avoided,” said the head coach after the full-time whistle. “We have to clear it down the touchline straight away, Aarón has to go hard into the challenge with Wirtz, then the rest of it doesn’t happen.” The sporting director also spoke about the Spanish full back wanting to play his way out of trouble. “It was a completely unnecessary goal to concede.”

A deficit that the Zerofivers were ultimately unable to come back from, despite a number of good opportunities. However, Mainz were also able to profit from the fact that the Werkself were also far from clinical in front of goal. “It’s a very frustrating defeat. We really wanted a third consecutive win,” said Schröder, at the same time stating that the team give it their all and played an open, offensive game.

“Leverkusen are a team that like to keep possession. We knew that we would need a lot of patience,” Beierlozer explained. Nevertheless, Mainz proved to be a threat on the counter. Jonathan Burkardt was one of the team’s brightest sparks on the day on just his second ever start for the club. The 19-year-old was denied by the goalkeeper after some strong play from Ridle Baku. The winger came close once again later on in the game after being played through by Jean-Philippe Mateta. Baku then had a chance of his own moments before the half time whistle, after getting himself into a promising position.

Mateta thought he had levelled the scores four minutes into the second half, however the referee had blown for offside before he could begin his usual celebration at the corner flag. The striker was standing in an offside position when Karim Onisiwo played the pass through to the Frenchman, before calmly dispatching into the far bottom corner. “We have to pay more attention. In this situation the striker only has two jobs: to make the run and stay onside. One of these didn’t work. He was offside. It’s very frustrating,” the head coach criticised his striker. The sporting director also criticised the Frenchman’s lack of intuition in this situation. “He had more than enough time to get his bearings and wait for Karim to play the pass.”

A one-goal difference for the eleventh time

However, after this, the game was blown wide open. Mainz had a number of opportunities to get themselves level. First Onisiwo was denied after Burkardt’s pass, then Levin Öztunali came close after a powerful counter-attack, followed by Edimilson Fernandes crashing against the crossbar from distance. The visitors had the ball in the net for the second time of the afternoon in the final moments, however once again it was disallowed as Öztunali was standing in an offside position in the build-up to Ji Dong-Won’s goal.

“It’s the second game against Leverkusen this season, which we could have got more from,” said Beierlozer after the game; a constant theme throughout the season for Mainz. “We have lost eleven games by a one-goal margin. Too often we haven’t made the most of good chances and performances to turn games in our favour.”