MUST KEEP THE HUNGER IN RELEGATION BATTLE

Mainz will be challenged by a rising star on Saturday against Bielefeld - Lichte: "Commitment and quality in training is still high". 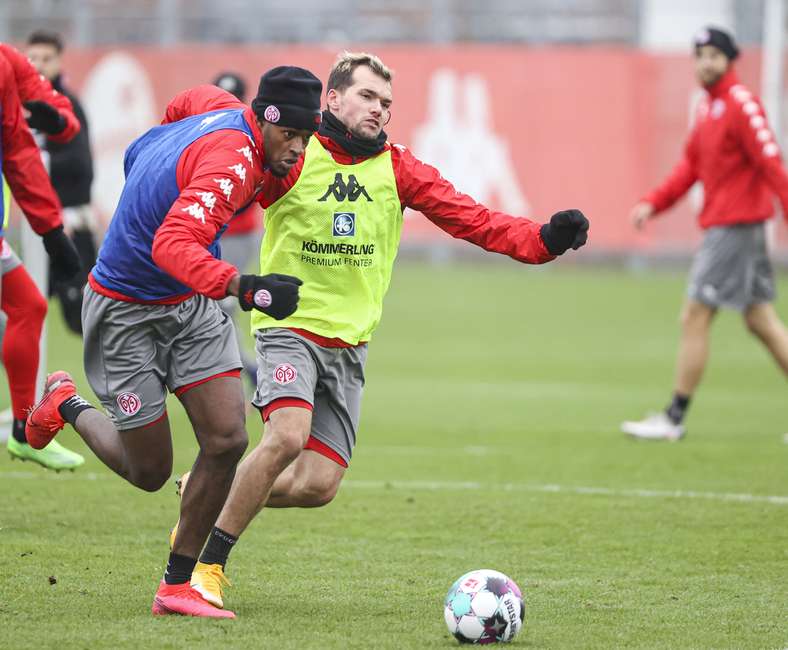 Wednesday morning at the Bruchweg: Gripping duels & maximum intensity characterised the first part of the week.

For the first time this season, the Zerofivers will meet a team below them in the table. Following the results of the past few weeks, Mainz is likely to be slightly favoured for the match against Arminia Bielefeld on Saturday afternoon (3.30pm CET). This is a situation which the head coach of the Zerofivers does not want to deal with in advance: "We are interested in where we can gain advantages. It's all about the relegation battle, going full throttle and playing good football," explained Jan-Moritz Lichte at the press conference on Thursday afternoon.

Mainz 05 are unbeaten in three games, while Arminia, after taking four points from the first two games of the season, has left empty handed in the past seven matches. While the East-Westphalians - with two narrow 2-1 defeats against Champions League teams, Leverkusen and Leipzig - want to get back on track, the Rheinhessen are looking to constantly improve their score in the final part of the year. Lichte expects his team to recall the same attributes that they have displayed in recent weeks. "What you want is for the team to leave everything they have on the pitch. We have to stay hungry, regardless of our results. Even if we win two games in a row, the passion that Mainz 05 stands for is always the basis of our game". It must always serve as the basis for being successful in the Bundesliga. "We want to actively shape the games and play forward with as few touches as possible", says the 40-year-old. At the same time, it is important to be aware that Arminia will also give everything  "to look good".

Lichte meanwhile humorously took note of the fact that on Saturday afternoon, two teams with comparatively low ball possession stats (39% for Mainz, 41.3% for Arminia) will meet. "We have already considered consulting with Bielefeld to play without a ball", Lichte said in response to a question from a journalist. Of course, according to the 05 coach seriously, one does not voluntarily give up possession of the ball. "We want to conquer it, and use it." At the same time, however, you have to manage without long passes in order to avoid any skirmishes in your own half or in midfield. It was in this area that the coaches wanted to focus on, after the initial analysis had led to the realisation how difficult Mainz had previously found it to score goals or create good chances. Six goals from the last three matches bear witness to the development in this area.

Continuing with the "right step"

The Zerofivers will have to do without the injured Levin Öztunali, substitute goalkeeper Marius Liesegang, Phillipp Mwene and Ádám Szalai. Over the next few days, the loss of Öztunali, who was most recently doing well on the right wing, will be of particular importance. Besides Jeremiah St. Juste, Jonathan Burkardt, who already played against Hoffenheim in the final phase, or Daniel Brosinski, for whom Aarón could be an alternative on the left, could also take over. Irrespective of the choice of personnel, Lichte is convinced that his team will step on the pitch on Saturday with the same intensity as in previous games, in order to build on the "right step" (Rouven Schröder) that was recently taken. The key word is consistency: "Commitment and quality in training remain high", emphasises the head coach, no one has let up even one percent.

Nevertheless, he emphasises again, "let's talk about what has happened in some situations in the minds of the players in recent years. We have not lost in three games, but we must keep at it. This hunger must be felt and visible week after week".