An intense week in training lies ahead / No friendly match planned 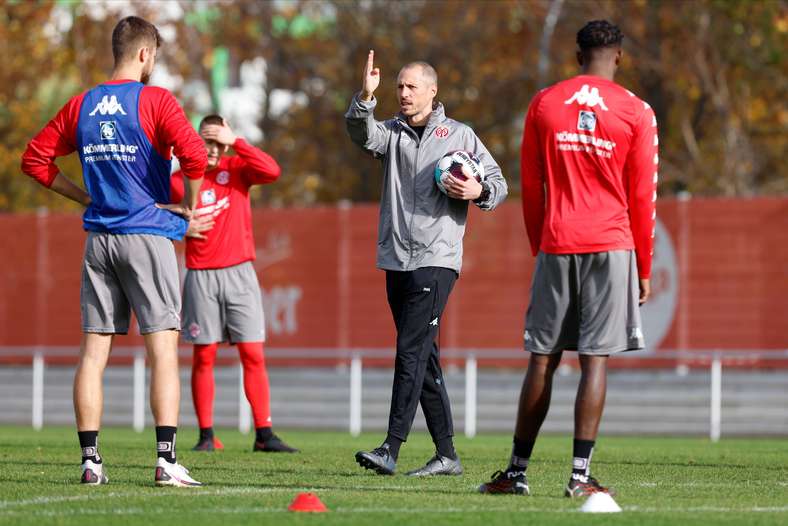 Mainz head coach Jan-Moritz Lichte will work intensively with the squad during training this week without the stress of playing.

Hard work is called for in this international break. Jan-Moritz Lichte has a large group for training, despite eight Mainz players away on international duty, and would like to concentrate on the relevant topics. The Mainz coach purposely refrained from arranging a friendly. "We want to use the time to work in a targeted and intense way without having to the stress of a game to plan for. In a normal Bundesliga week, there is sometimes not enough time for this," said Lichte in the press conference on Tuesday.

"When everyone is fit, we'll have 22 outfield players," reported Lichte, who also brought Oliver Wähling and Michael Akoto up from the U23s into the first team squad. The things we work on will be the things that have led to us still being without a win in the Bundesliga after seven matches. "Our feeling was that we would rather train than play a friendly where everyone can only play one half," explained the coach. "We want to work on our priorities and principles without stress. During training you can create different situations more often, you can always interrupt and correct. If this works out the way we imagine it, the weekend will be free for the players. And on Monday we will start the preparation." On Sunday we face SC Freiburg away from home.

What we'll work on is obvious following the video analysis of the 2-2 draw against Schalke 04. "When you see in the video how open we were for our chances to score, then this draw remains annoying. Every setback is frustrating if you feel you've thrown everything at it, you were close again and didn't make it. We have to work hard. As long as we don't improve, there's probably always a reason why we won't win the game," said the 40-year-old.

In principle, there are two main priorities. "We've seen that we had the biggest problems at the back, that the long balls behind the defence hurt us the most and we did not always cope well with them. We have to start with the opponent's deep play and defend better there. We also have to continue to attack and make better use of our chances.

The data has shown that the team is now ranked seventh in the league when it comes to identifying major opportunities through counterattacks, winning the ball back and switching from defence to attack. In contrast to this are sobering defensive numbers. "We are in 18th place when it comes to number of scoring chances allowed within the penalty area," explained Lichte. "That means we concede the most goals from inside the box. That's where we have to start. Most of the goals against us come from headers, which also has to do with the fact that we are not close enough to the man in the box. We do zonal-marking, which we want to do, but when it comes to the penalty area, it's all about covering your opponents. These are points that if we improve, promise us a great chance of conceding fewer goals."

We lack the points, we don't need to go into the details. And yet what we see in the game and can see in the numbers shows we're going in the right direction

The Mainz coach can already see a clear upward trend. "As a coach you always have to be careful not to create the feeling that you are just trying to put a gloss on everything. I haven't done that in the last few weeks either. We haven't picked up the points, we don't need to avoid talking about it. And yet what we see in the game and can see in the numbers is going in the right direction. We want to put our opponents under pressure and therefore create our own chances of scoring. The points don't reflect this way yet, but the sprints, the distance covered, the willingness is absolutely there," emphasised Lichte and he added: "The exception was the first half in Augsburg. In the last four games I have seen absolute willingness in seven halves. But the fact that we define ourselves through this must play a role in the mentality of how we want to play our football."