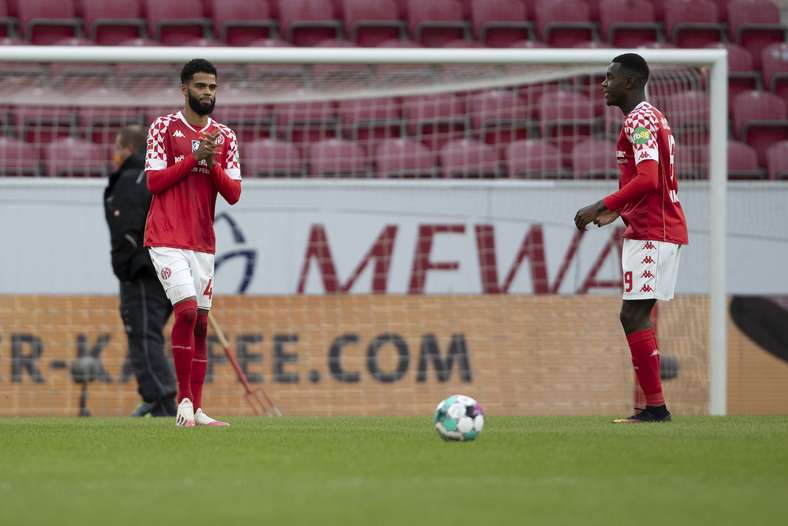 1. FSV Mainz 05 were beaten by newly-promoted side VfB Stuttgart 4-1 on Saturday afternoon in front of the home fans at the OPEL ARENA. After Robin Quaison took the lead in the early part of the game, the visitors scored four goals through Silla Wamangituka, Daniel Didavi, Mateo Klimowicz and Sasa Kalajdzic. The Zerofivers went down to ten men towards the end of the game when Moussa Niakhaté was sent off (78’).

Mainz made one change from the opening-day defeat in Leipzig; Jean-Paul Boëtius came in for Jonathan Burkardt in attack. It was the first Bundesliga game at the OPEL ARENA in front of fans since March. 3,400 supporters cheered their team on.

The guests had the first chance of the game when Orel Mangala tested Robin Zentner from a tight angle in the first two minutes. The hosts seemed nervy in the opening stages, and struggled to get the ball out of their own half. Stuttgart had five corners within the first ten minutes, but the score remained level. Niakhaté then brought Mainz into the game with a run down the wing and a cross in the box. It came to nothing, but was the first time the home side went on the attack. Soon after, the goal did come. Ridle Baku passed it to Boëtius from the right wing, who cleverly chipped it into Jean-Philippe Mateta. His header found Quaison, the club’s top scorer last season, who made no mistake (13’). The goal came from nothing, and the game became much more even in its aftermath – both sides balanced each other out. The next chance went to Boëtius after a fine solo run, but his effort went just wide of the right-hand post (25’).

The first half continued to be plagued by mistakes, including by the visitors, who should have equalised in the 36th minute: Wamangituka’s curling effort went narrowly wide. It looked like Mainz would go into the break with the lead, but Wamangituka scored in injury time. Stuttgart’s captain Gonzalo Castro found him after a counter-attack, and Zentner was powerless to stop the equaliser (45+1’).

The Zerofivers made it too easy

There were no changes for the second half. After little action in front of goal in the first half, it was tellingly a mistake that led to Stuttgart’s second. Niakhaté gave the ball away, Kaljdzic found Tor Didavi and it was 2-1 (61’). Karim Onisiwo almost hit back for the Zerofivers instantly after bursting into the box, but Waldemar Anton did enough to put him off and the shot went wide (65’). Daniel Brosinski set Boëtius up six minutes later, but he couldn’t find the target either (71’). The home side then went more offensive as Levin Öztunali was introduced in place of Leandro Barreiro. Öztunali was almost super-sub, but his curler from the edge of the box went over the bar in the 74th minute.

Whilst Stuttgart became increasingly threatening on the counter-attack, Mainz searched for gaps in the away side’s defence. But the task became much harder in the 78th minute when Niakaté was sent off for a second bookable offence. Stuttgart then punished the Zerofivers on the counter-attack; Boëtius lost the ball in the opposition’s half and Baku couldn’t stop Wamangituka’s pass to Klimowicz – 3-1 (80’). It put the game to bed, but it got even worse when Kalajdzic got Stuttgart’s fourth (86’). Pascal Stenzel’s red card in injury time was a side note. It finished in a tough home defeat. The Zerofivers are next in action on Friday night (20:30 CEST) against Union Berlin, with pressure to get on the board after two defeats.