TIME FOR A NEW CHAPTER 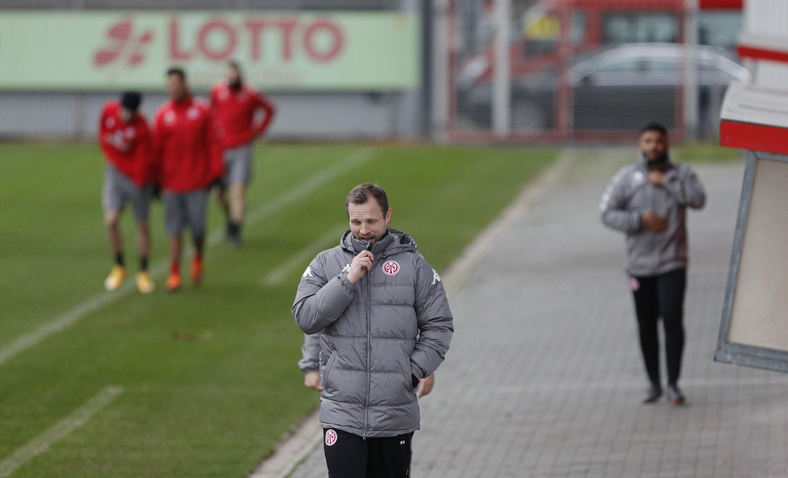 At 3pm on the dot, the Zerofivers and their new coaching team set off for the training ground on the edge of the Bruchweg stadium.

"It is a fundamental virtue in Mainz to treat each other properly," Bo Svensson announced during his official introduction at noon in the OPEL ARENA. And the new head coach set a good example after the first training session, high-fiving every single player and exchanging a few words with them. A small gesture that nevertheless shows what the former player was after, especially in these first few days of getting to know each other. To quickly become a unit, not only to get to know each other, but also to understand each other. And at the same time give each player room for his own individuality, as he emphasised. "I was a player myself and I know roughly what the processes and currents in a team are like."

During his time as a player, he learned a lot from Jürgen Klopp and Thomas Tuchel, both in terms of content and man management, the Dane revealed on his first day at work at his old workplace. "I would be stupid not to have done that. At the time, that also awakened the desire in me to become a coach in my last year as a player. Because I was actually a bit fed up with this football world at that time." Now the former central defender is starting a new chapter at Bruchweg and has deliberately been given a long-term contract until the summer of 2024. Incidentally, Christian Heidel also played a major role in the fact that the hunger was not satisfied after all, as the new board member for strategy, sport and communication stated on Tuesday: "In his last year as a player, Bo often sat on the bench. I watched him and sensed that a future coach was sitting there, the way he commented on and analysed the game. I was even convinced that a future Mainz 05 coach was sitting here," a far-sighted assessment by the 57-year-old that has now come true at the beginning of January 2021.

Svensson has not had much time to prepare for his new task since Heidel first contacted him on Christmas Eve ("At first I thought he was sitting in Mallorca and wanted to chat a bit," Svensson said with a laugh). But with the initiation of the contact at the end of the year, he had already thought about how he wanted to approach the task in the first days together with the coaching team: "Of course we thought about this week in advance. There was a bit of time, I watched games and always followed Mainz anyway. I know the team and have a clear idea of how we will approach the week. Of course, now it's all about short-term goals and staying in the league." Nevertheless, it is important to deal with the question of how we prepare Mainz 05 for the future, not least in these days and weeks, explained Svensson, who followed much of the first session from an observer's role, using the time for individual discussions and leaving his assistants Patrick Kaniuth and Babak Keyhanfar mostly to explain the individual forms of exercise. Levin Öztunali, who was forced to take a break due to a muscle injury suffered in the match against TSG 1899 Hoffenheim, was also able to participate in at least part of the team training on Tuesday.

What will happen next, apart from the daily work on the pitch? "It's our turn to analyse the whole squad and to think about what might make sense for both the player, and for us. At the same time, we are in the market to see where we can possibly strengthen ourselves. But it has to fit us and give us a long-term prospect," says Svensson, explaining that he has fundamental confidence in the squad and that any reinforcements will not be based on any kind of panic.

...ultimately part of what distinguishes Mainz 05

The head coach also addressed another topic close to his heart, which he would like to push further and pursue even more strongly in the future: "It is definitely my ambition that the connection between the academy and the first team becomes even closer. We deliberately want to give young players a chance here because we see that we have a lot of talent. The academy does a very good job in terms of producing quality. It's a piece of our philosophy and strategy for the future and ultimately part of what sets Mainz 05 apart." With Finn Dahmen, Paul Nebel, Niklas Tauer and Merveille Papela, four of the club's own youngsters have already made their Bundesliga debuts this season. If Svensson has his way, many more names are likely to follow in the coming years who have absorbed the Mainz DNA, as well as the expected respectful interaction with one another, as part of their football training.