"These are little slip-ups we're making at the moment."

The Zerofivers‘ head coach stresses the need for improvement in all areas as the side have only five games left to beat the drop. 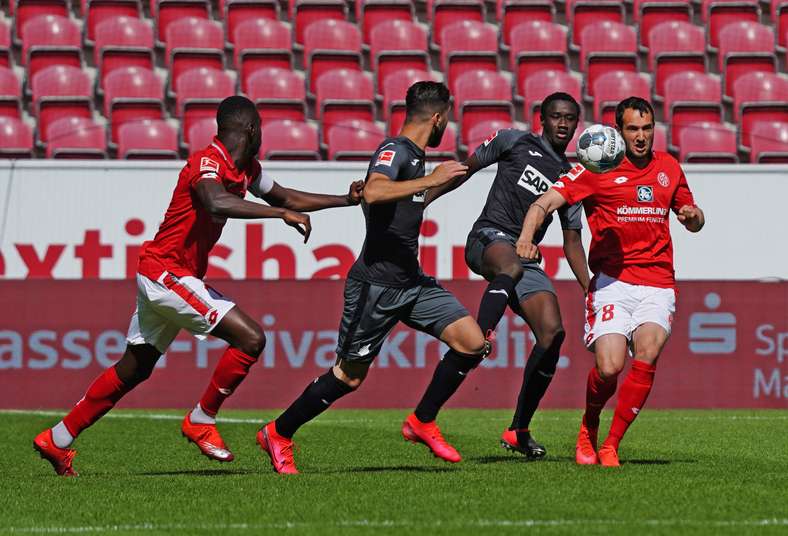 Despite a dominant performance against Hoffenheim, Mainz were unable to score.

Mainz‘ third game of the week did not help their standings in the relegation battle. “I’m disappointed and really annoyed,” said Rouven Schröder after the 1-0 home defeat against TSG Hoffenheim at the OPEL ARENA on Saturday. After a game in which Mainz exerted their superiority and dominance, but failed to score. “We lost because we made a couple too many defensive errors and we didn’t get the luck up front.”

The game was actually something that the team could draw self-confidence from, said Mainz’ sporting director. Thanks to Florian Müller’s early penalty save, the team remained unimpressive, barring their dominance and Robin Quaison’s unlucky effort. Taiwo Awoniyi’s disallowed goal was ruled out due to an apparent collision between Karim Onisiwo and Oliver Baumann and the penalty shout where it was apparent to the whole team, but not the referee, that Awoniyi had been fouled by Baumann and that it was a “crystal clear penalty”.

The first things to work on.

“It’s bitterly disappointing that we’ve managed to take no points again. We need to work on that first,” said Achim Beierlorzer the next day in a Skype press conference. The head coach had already seen the crucial points of the match, but the main video analysis will take place on Tuesday. “We saw the passion and the right mentality, but in the end we still lost 1-0,” he said. That needs to be digested ahead of next week’s game against Frankfurt. In the short term there were still aspects that the coach focused on. “You can address the whole issue with the word “determination”. Taking the best chances to score. I can think of two or three situations where a cross comes in from the flanks three meters in front of the goal, or Taiwo’s big chance, where he sort of stopped instead of firing the ball into the back of the net. We had 17 shots on target but couldn’t score a goal. The same determination applies defensively as well, like the goal we conceded as well as the penalty we gave away,” said the coach. “These are all little slip-ups we’re making at the moment, but you also need luck. Like we were unable to get the clear penalty awarded or Quaison’s effort was just saved by Baumann.”

Beierlorzer remains optimistic that his team will succeed. “Against Hoffenheim we had a performance with engagement, a good mentality and a storng will. That is positive. The way I see it, there is nothing else to do but look forward. I see no other approach. I could criticise everything and spread a gloomy mood, but will that make things better? I don’t think it will,” explained the coach.

But at the end of the day we need points. We can’t expect everyone else to lose and for us to stay up with only 28 points. There’s no point in leaving things to chance. We can’t be put off now. We need to stay up and we will try everything to get the points we need for our goal and for the team.”

The sporting director meanwhile praised the team’s effort and commitment, which was the same standard as any team trying to survive relegation. “We are still fully in the relegation battle, nobody has been relegated yet. Now we will press on in Frankfurt. A lot of people won’t give us a chance there, so it’s an opportunity for us,” said Schröder.