The Zerofivers have clear priorities: "They all understood"

Goalkeeper Robin Zentner praised the Mainz centre backs after the goalless draw against Schalke - Bruma has stabilised the defence. 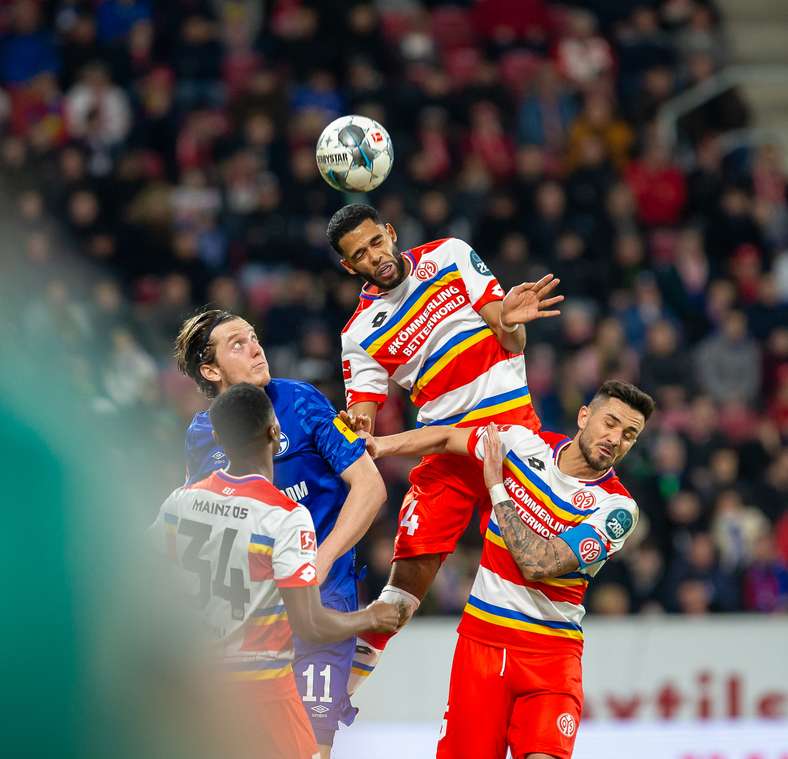 Jeremiah St. Juste, along with his two defensive colleagues, dealt with (almost) everything against Schalke.

Last Sunday’s 0-0 against Schalke was only the second clean sheet that has been kept by the Zerofivers this season. “I’m happy about it, it was about time,” said Mainz stopper Robin Zentner, who was seen to be visibly annoyed with his teammates after the final whistle. A moment of carelessness in injury time had threatened to snatch a draw away from FSV.

“Of course I was mad. If it goes in and we lose, then everyone would be annoyed,” said the Zerofivers’ goalkeeper. “I shouted at the whole squad, then JP was standing there.” Zentner grabbed Jean-Philippe Mateta and gave him a dressing down. Weston McKennie wasn’t picked up in the box had been able to meeting the delivery from the corner with ease. “He shouldn’t be allowed to get to that ball,” the keeper stated. He went on to say that it does not matter who wasn’t tracking the Schalke man. “It’s about us doing everything we can to avoid these things happening in the 91st minute.”

Zentner: “They all understood”

Nonetheless, the Mainz stopper acknowledged that his defence had put in a fantastic performance. “We defended well form the front, were always alert in possession, and didn’t let their forwards have a sniff. The fact that they had two or three chances is normal and isn’t a problem.” It’s a possibility that Mainz’ recovered defensive stability is down to Jeffrey Bruma, who has had two commanding performances at the heart of the Zerofivers’ defence. “I also think that they all understood what it’s about, and that the defence stays strong in coming games,” Zentner continued. FSV’s January signing has proved to strengthen the back line. “Good players bed into a new team quickly,” Achim Beierlorzer explained. “Jeffrey is a really experienced and great centre back. He allows the two other central defenders to put pressure on the ball carrier, without leaving us light in the middle. He organises the defence well and does everything I expect of him,” the head coach stated.

The 28-year-old Dutchman played in the heart of a back three, alongside Jeremiah St. Juste and Moussa Niakhaté, who played hard and tidied up well at the back. “Being solid in defence is the key to success,” said Beierlorzer. “Of course three at the back is stable, especially when they are playing so well. We needed to strengthen the defence, we couldn’t keep being the leakiest defence in the league.”

Rouven Schröder confirmed that, from the outside, this three at the back looks really solid with Bruma. “I thought it was impressive that Jeffrey defended bravely, even after picking up an early yellow card. He snuff out danger and marshalled the defence. His central role suits him.”

The experienced defender himself was rather reserved in view of the praise. “I won a lot of tackles and think it was alright ,” said Bruma. The centre back went on to say that he agrees that there is more stability at the back. “It’s a step forward. We need to build on it, go on a run and continue trying to get something against every team we face,” explained Bruma, who just wants to go about his work solidly and quietly. “That’s why I’m here. I try to do my job and help the team.”

On  Sunday, Bruma has a carnival date with his old Wolfsburg teammates. Mainz’ new boy doesn’t want that to be overstated either. “Of course I know all of them, we worked together for three years. But at the end of the day, it’s a game that I want to win. We need the points,” said Bruma, who is eligible to play away in Lower Saxony. A clause stating that he may on play against his parent club doesn’t exist in the loan agreement between FSV and VfL Wolfsburg. “We didn’t speak about it at all,” said sporting director Rouven Schröder.