"The team can play intense football"

Zerofivers coach Achim Beierlorzer is happy with the point in Cologne, especially since Mainz came back from 2-0 down to start with. A good performance in special circumstances. 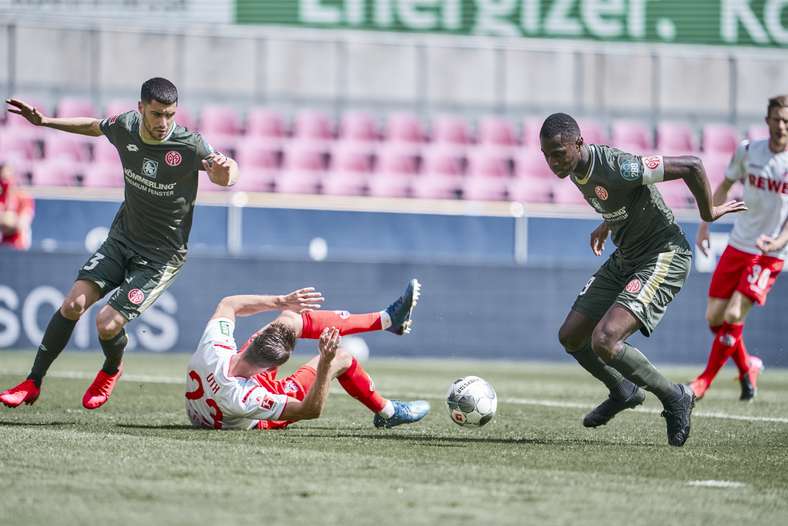 Achim Beierlorzer sums it up perfectly: “I think that we did a great job.” By that statement however, the Mainz 05 coach didn’t just mean the deserved point taken from the hosts after first going 2-0 down, but also how satisfied he was with the way the players handled themselves in Mainz’ first game behind closed doors.

Beierlorzer had already spoken previously about the huge responsibility of the clubs in the run-up to the restart, and a chance to provide arguments against the critics. Both the Zerofivers and the home side went all out in their efforts. “Everything went well, we put the guidelines into practice effectively,” said the 52-year-old after full-time. There was something eerie about playing in the empty 50,000-seat arena, without crowd reactions or the fan chants, and it showed that while football played behind closed doors is something nobody wants, the match also raised hopes that the season could be ended under these conditions.

A Strong and Courageous Game

“There was a lot of life here for a match played behind closed doors,” said the Sky reporter to the Mainz boss. “Both sides played well. I think the 2-2 is well deserved. I can only praise the team’s morale after recovering from going 2-0 down and in the end we could have even won the match,” explained Beierlorzer.

Rouven Schröder spoke of the, “Absolute force of will and strong mental performance: it was a really exciting game. Both sides wanted to win, and there was everything to play for. I think it was a really good display for our first matchday in eight weeks without playing competitively,” said the Mainz sporting director. “A good start and a good level of performance. We need to stay focused.”

Mainz started strong in Cologne, but were caught unawares when they conceded early. “It was far too easy for the opponent,“ analysed Beierlorzer. Moussa Niakhaté’s misguided attempt to tackle Mark Uth resulted in a foul, and the resulting penalty was converted by Uth to give the home side a 1-0 advantage.

But the Zerofivers were undeterred, and pressed on, bringing a good mix of compactness and possession football to the fray. They had two great chances to score in the first half, the first due to the outstanding individual run from Karim Onisiwo, who set up Jean-Paul Boëtius, but the Dutchman's shot from close range was only barely intercepted by Toni Leistner to deflect the ball out for a corner. The second chance fell to Onisiwo who was played in by  Robin Quaison's pass shortly before the break, but Timo Horn had to make a deft fingertip save to brush it clear of the net. After the break, Mainz were caught cold early on yet again, when they fell asleep on a set piece and Florian Kainz headed in at the far post, increasing the deficit to 2-0.

Quaison's great opportunity to equalize had just been blocked. "Then there was this sudden desire of the team to score. You could tell that the boys didn't just want to give in," said Schröder. "It wasn't just passion, it was also good football. You felt that the team wanted more, and they made everything happen to achieve that end." Florian Müller between the Mainz sticks was on hand to make a couple of smart saves in the closing stages,  but thanks to Quaison's dream pass on Baku, and the German's subsequent cross to the feet of Taiwo Awoniyi, the Nigerian scored to reduce the deficit, and it suddenly looked like game on for Mainz. Schröder also lauded the "amazing individual performance" of Kunde Malong  who practically ran unimpeded straight from the halfway-line and almost passed the ball into the net, securing the equaliser and securing Mainz a deserved point. "The last ten minutes were completely open, and it looked like both sides really wanted to win," said Schröder.

It was very important to show this kind of performance in Cologne , emphasized Beierlorzer. "We can definitely take away the fact that we were able to deliver such an intense game and were able to get a draw in the face of a large deficit. That means the team can play intensive football. We have already seen that we can be more stable on the defensive, but overall I'm very happy."