THE SUM OF WRONG DECISIONS

After the defeat against Arminia, the Mainz coach criticises the lack of consistency in decisive situations 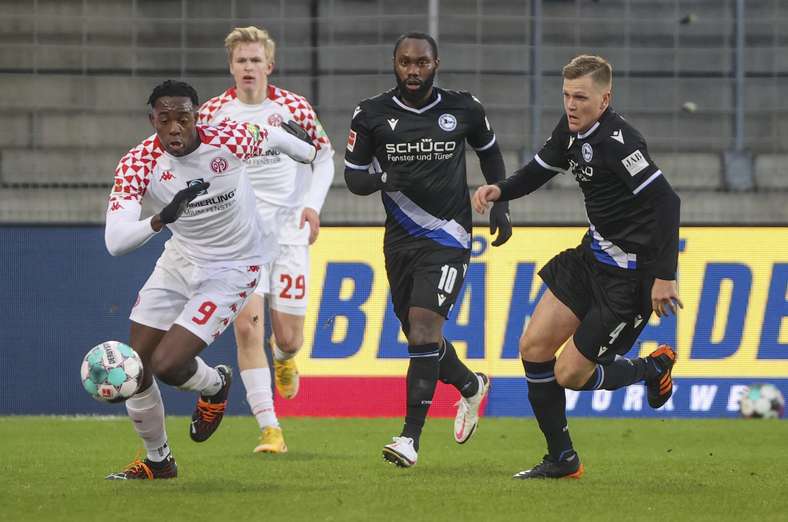 JP Mateta couldn't add to his seven goals this season in Bielefeld, despite some excellent opportunities.

According to Jan-Moritz Lichte, he looked into disappointed, frustrated faces in the Mainz changing room at the Bielefelder Alm following the 1-2 defeat. "It's definitely a setback for us," emphasised the head coach, who after the seventh defeat of the season did not want to criticise his team's overall performance under any circumstances. Rather, poor decisions in individual situations had led to the Zerofivers leaving empty-handed after three matches without defeat.

When Manuel Prietl's shot deflected off Alexander Hack in the 21st minute into the goal to make it 1-0, the Rheinhessen team had already made probably the most disastrous mistakes of the game that could have led to a goal. Jean-Philippe Mateta had twice appeared free in front of Stefan Ortega in the early stages, but both times he failed to get the ball into the goal. With his first attempt he failed to beat the goalkeeper and four minutes later he put the ball just past the post with his heel. "It looks stupid when you do something like this," said Lichte with a view to the second miss. "It looks like a lack of consistency, but I don't want to accuse JP of recklessness. He wants to make up for all the opportunities, that's what he's working on. After the Frenchman missed the chance to take the lead, Mainz was unable to stop Prietl's strike from outside the box after Doan's pass. The visitors came from nowhere to take the lead. And even before they made it 2-0 a little later, the Mainz players were too passive, which helped Doan to score. "We have to accept the battles, these are very decisive points for us. No matter where a duel takes place, you can always prevent a goal," says the 05 coach. "If a few percent are missing from our team, it will be punished brutally," he stated. So while the Zerofivers missed the best opportunities, the hosts proved impressively how easy it can sometimes be to score goals in the Bundesliga.

Too little, too late

However, Mainz was not lacking in the right attitude, as the coaching staff analysed. Rather, it was the wrong attitude, especially in the first half, both in attack and defence, in crucial moments of the game. In principle, his team had implemented what had been demanded of them, according to the coach. "Good pressing, fast counter-attacks," all of this was called for by his team, with the small but decisive flaw that they too seldom acted with the final consequence. In the second half, despite high ball possession, offensive changes and a system change, Mainz were not really compelling in front of goal. Only Kevin Stöger's goal in the 82nd minute initiated a series of attacks, which in the end was without success. Shortly after Mateta's third opportunity of the day in the fourth minute of injury time, it was over at the Alm, the promoted players cheered, the 05 players let their heads drop. After all, there was a good chance of distancing themselves from their opponent with a victory to four points and create more room for themselves at the bottom of the table.

The pressure is still there, that hasn't changed

"We left something behind that we should not have left behind. Now it's all about winning against Cologne," said the head coach already looking ahead to the match with fellow competitors on Saturday afternoon (3.30pm CET in the OPEL ARENA). All in all, he said, it is now a matter of "powering through to Christmas" for his team. After all, after the match against the Effzeh, two big weeks are still waiting for Mainz with the matches against Hertha BSC and Werder Bremen and the DFB Cup match against VfL Bochum (23 December). As disappointing as the setback from the loss to Arminia is, not much has changed in the initial situation since he took office at the end of September, emphasised Lichte: "The pressure is still there, the situation hasn't changed, but it has not improved either. In the coming games it will also be important for the Zerofivers to make the right decisions more often than at the weekend, which should then lead to a further improvement of the situation in the lower half of the table before a short winter break. A first step they can take against 1 FC Köln, who are two points above Mainz after their draw against VfL Wolfsburg.