The stats as proof of intensity and desire

The Zerofivers completed a record-breaking 312 sprints against Eintracht Frankfurt. Two wins on the bounce see Mainz 05 head to Augsburg full of confidence. 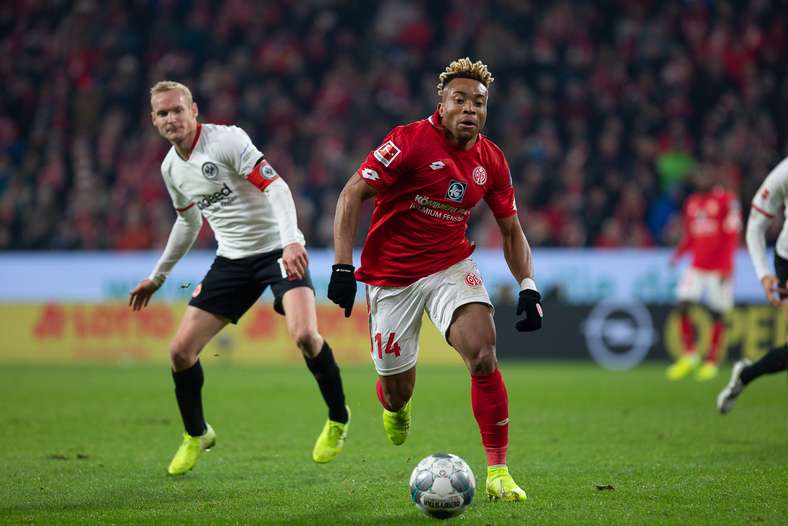 On the way to the winner: Kunde winning the ball back in the 69th minute led the way to Szalai's winning goal.

The traditional Mainz carnival hit “Olé, olé, fiesta”, which is played in the OPEL ARENA after particularly big wins, is still ringing in our ears two days later. The way, in which the team racked up the 2-1 win in an exciting and turbulent Rhine-Main Derby against Eintracht Frankfurt, entertained the fans a brought back the old carnival feeling to the club. The performance was intense, it was emotional, it was hungry. There was no doubt that the Zerofivers wanted to take all three points away from the match.

“These are two important victories, which that this team is alive and kicking”, said Rouven Schröder after the Derby. “Their chests are puffed out. And now we are looking forward to an exciting game in Augsburg. We want to stay hungry and we want to win.” On Saturday (15:30 CET), a match-up with FC Augsburg, led by ex-Mainz head coach Martin Schmidt, is on the cards. “Our matches there are always interesting. We are going to Augsburg full of confidence”, explained the sporting director. This confidence is surely a product of back-to-back wins in Hoffenheim and now against the Eagles, even if the guests on Monday night caused Mainz more than a few scares in the closing stages of the match.

“We Eintracht made tactical changes and start risking more after they scored, we couldn’t just sit back and defend anymore”, Achim Beierlorzer acknowledged. “We should’ve had more control of the football, and we had to get a second wind. There are definitely things we can improve.” Beierlorzer has made a few adjustments in a short space of time. In order to restore a team’s belief i itself after a bad run of form, nothing helps more than wins like these. “What I find great, is that the team has an unbelievable desire. Defending from the front with speed, this suits us. You can see that the players can translate this onto the pitch”, said Beierlorzer.

This was especially noticeable in the second half. “In the first 20 minutes of the second half, Mainz pressed us hard. When you have to play with ten men against a team that has so much power and punch, it is never easy. Mainz has an unbelievable amount of pace and power”, Eintracht head coach Adi Hütter underlined. The statisticians uncovered a fascinating figure in the game; Mainz’ players completed a total of 312 sprints. This is a number that no team has reached in the past two-and-a-half years.  The average in the Bundesliga is around 250 sprints completed per game. And for whomever that is not enough proof of FSV’s hunger on the night, the following stats should be a good reference; in their recent duel with BVB, Bayern managed 304 sprints, what was the highest number in a game since the record for this particular stat began in 2011/12.

It is a curious thing that Mainz achieved this record playing against ten men, when usually the opposition players do considerably more running with a man down. “These 312 sprints tell us everything about this team’s commitment. They show that the boys absolutely wanted it”, Beierlorzer said. Sprints going towards your own goal are also recorded as part of this statistic, and those sprints were required at all times during the match. This is particularly true of the final phases of the game, as Frankfurt took it to the home side, not letting Mainz put the game to bed. This in turn is a positive happenchance, just another one of those little things that will ensure that this derby lives long in the memory.

“I am so happy that we won, because these points are so helpful in our situation”, said FSV’s head coach, who has had an impressive start to life at the club. Beierlorzer has completely committed to his new role and was accepted as a Zerofiver in no time at all. After the Derby win, the 52-year-old was questioned about his previous club, to which he replied, “we have to leave Köln behind. I am the head coach of Mainz, and I only want to talk about things related to Mainz 05.”