The next big step

After the win against Paderborn the Zerofivers hope to pick up another three points and increase the gap between themselves and the relegation zone. 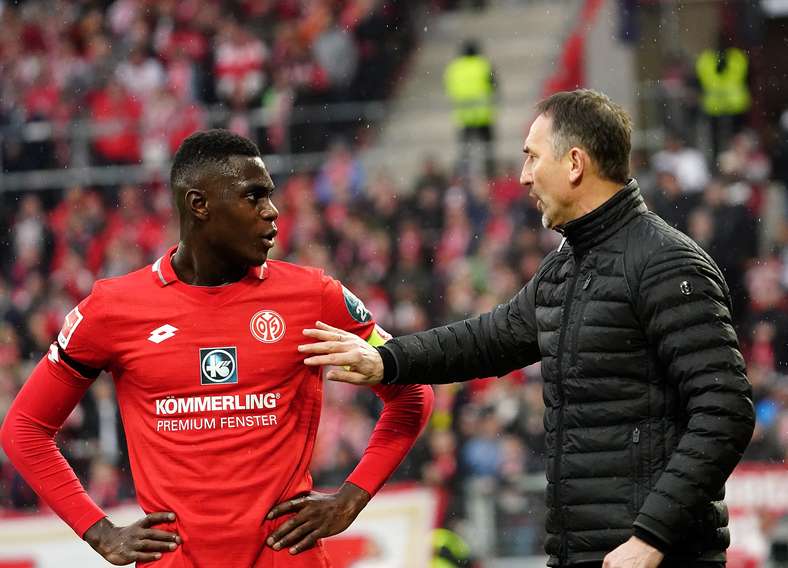 With their second home game in a row coming up, 1. FSV Mainz 05 have the chance to get some more breathing room in the Bundesliga by rising up and away from the relegation zone. Düsseldorf have been Mainz’ closest competitor in recent weeks, but FSV head coach Achim Beierlorzer says that last week’s 2-0 win against Paderborn could prove to be the basis for a successful performance against Fortuna. “Now we want to keep playing football to a high level,” said the coach in the press conference two days before the match.

This climactic bottom-of-the-table clash unfortunately happens to occur at the same time as the Coronavirus is making many matches across Europe take place behind closed doors, or cancelling them outright. However, there are no plans for this to happen on Sunday. “We are in constant communication with the DFL and the ministry of health,” said Rouven Schröder on Friday. There was also further discussions on procedure. “We also had a conference over the week. We were all told that the match, with spectators, would go ahead this weekend, and afterwards we would proceed on a game-by-game basis,” explained the sporting director.

The game will take place as an “Inclusion Matchday” as part of the UEFA project “CAFE Week of Action,” an annual initiative set up to promote the inclusion of people with disabilities in football. Various measures will also take place through the week to make the stadium more accessible for disabled people and in this way also make it easier for these fans to become part of Mainz 05.

From a sporting point of view, the importance of this fixture is clear: “This is an important game, a game against a direct rival in the league, anyone who looks at the table knows this. On Sunday, at 6pm, we will be on home turf and we will focus on beating Düsseldorf. We want to get the three points as that would be the next big step for us,” said Beierlorzer.

It is more important how we can best play to win

He and his team of coaches have been able to analyse Fortuna Düsseldorf many times. With the change of manager from Friedhelm Funkel to Uwe Rösler, the team has a new momentum to it. The Zerofivers coach expects the opponents to play a back three, with three midfielders, two pacy wingers and two strikers. “For us it is more important to see how we can counter their strategy and how we can play our own game,” said the 52-year-old. The strengths Mainz had on show when they beat Paderborn 2-0 could yet prove to be the basis for success against Fortuna. “That is what we expect,” stated the head coach. In addition, the match is expected to be smoother than the last game, in which weather and adverse conditions affected the speed of the match.

Dedicated with a good balance

“We played well in that last game. Now we must move on. As I said before the game against Paderborn, we should not be dropping a single point in terms of work rate or engagement.” Of course, Beierlorzer had seen his opponent’s cup exit against Regionalliga side 1. FC Saarbrücken after extra-time and penalties. “We have seen it, but it won’t matter for our game on Saturday. Under no circumstances will we be making the same kinds of mistakes that they made after playing 120 minutes. We need to bring that passion and engagement from the previous game into the new one, and ensure we start well, we’re strong in the tackle and have a good balance between defensive and attacking football.

Beierlorzer described the training situation from this week as “very pleasing,” with only long-term absentee Stefan Bell unable to play against Fortuna. Aside from Bell, the coach has a full complement of players to choose from, which he stated is his preferred choice, saying: “It is for me much better that I have to rack my brains thinking of the best starting XI for the job and which subs to take because the team are all healthy and can all put in a good shift.”