Team-building in a palatial setting

Tonight, the players and coaching staff will be attending a special party to show off their carnival spirit. A welcome break from the intense work being done at Bruchweg. 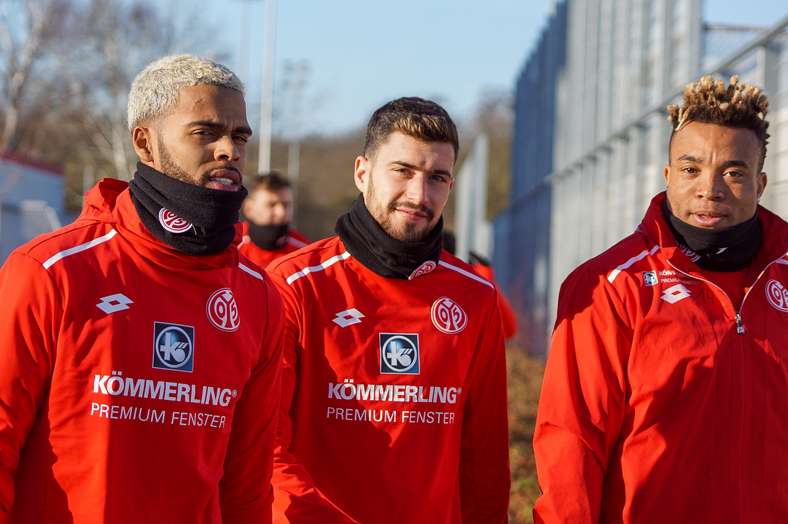 Training so far this week has seen cold temperatures but sunny skies over Bruchweg.

A full training programme awaited the Mainz players at the start of the week as the Zerofivers step up their preparations for their trip to Mönchengladbach. After today’s morning session at Bruchweg, Achim Beierlorzer took to his usual media rounds to present his in-depth analysis of Saturday’s opponents. This afternoon, the first team will hit the gym, before heading over to the Electoral Palace for the Zerofivers’ annual charity Carnival meeting, which kicks off at 19:05 CET.

Three days after that bitter and unfortunate home defeat to SC Freiburg, a bit of carnival festivity will be a welcome change of pace for the players. Other clubs did their team-building while away on training camps over the winter break. Beierlorzer, on the other hand, has decided to incorporate this traditional club event in his programme to further develop a sense of team spirit. This is new territory for FSV’s head coach. In contrast to many of his players, this will be Beierlorzer’s first taste of the carnival spirit within the club. Achim is looking forward to a couple of hours of humour, relaxation and frivolity as a break from the intensive workload the players and coaching staff have been under in recent weeks.

At the moment, daily life largely comprised of discussions, video analysis and individual analysis. “At the end of the day, it’s all about reminding players of their strengths, not telling them all the things that they can’t do,” Beierlorzer explained at midday. He went on to state that there was work to be done on the things that haven’t quite been clicking. “It’s like in tennis,” said the Zerofivers’ head coach. “I can get annoyed about a mishit, and then I’ll screw up the next shot. It’s like that for us. It’s not helpful at all. We have to think things over; we don’t want to bury our heads in the sand. But we can also talk about what went really well.”

The fact that Mainz hardly allowed their disciplined and compact opponents a chance to counter will surely be taken as a positive. According to Beierlorzer, had the Zerofivers been as clinical in front of goal as Freiburg, they probably would have won the match. “We definitely weren’t worse than Freiburg, but we didn’t take our chances.”

Mainz made mistakes in the final third. “We need to do those decisive things right. Both goals were avoidable. If we’re saying that these things decide Bundesliga games, then we need to do them. So we can’t be pleased with the fact that we did a lot of things right. We’ve been a bit further than that,” he stressed. “On the other hand, it’s a good thing that the team has the confidence to go out and play football.”

So it’s off to Gladbach on Saturday, but Beierlorzer will have to make do without the suspended Pierre Kunde. “His absence hurts us, but there’s a lot of competition for places in midfield. At the end to the week, we’ll decide who to put in there.” In Leandro Barreiro and Ridle Baku, Beierlorzer has two proper defensive midfielders at his disposal. “We saw Leo and Ridle together in the friendly against Dortmund,” said the coach, who also mentioned Phillipp Mwene as a potential option. “Theoretically, Phillipp can play in midfield. There’s also the chance that we play 4-3-3, with only one defensive midfielder, and two players in that number eight role.”

Independent of who starts against the Foals, Beierlorzer’s demands are clear; “Face up to the challenge and take our chances!”