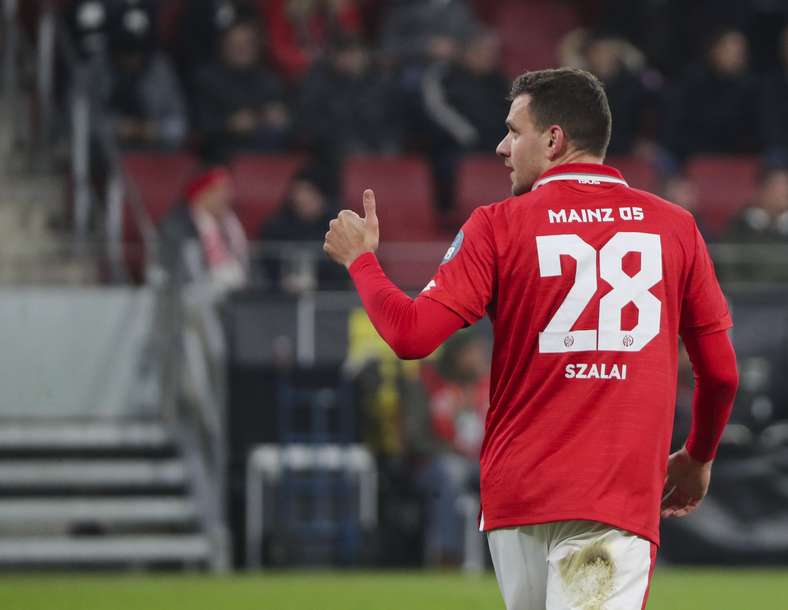 Szalai celebrates scoring the winning goal in the Rhein-Main derby

Ádám Szalai has been waiting for this moment ever since his return to the club from Hoffenheim at the end of August. The Hungarian striker managed to finally net his first goal of the season after nine goalless appearances. And what a time to score; the target man used his physical presence to seal yet another derby win against Eintracht Frankfurt for the Zerofivers, and to earn their second Bundesliga win in a row. “I’m really happy. Hopefully our good form can continue,” Szalai said after the game.

However, the striker later admitted that it was completely unexpected. He had missed three training sessions in the lead up to the match due to illness so his place in the squad was far from secure. “Suddenly I came on and then I scored. I’ve trained like a madman every day for eight weeks to try and score a goal. And then it finally happens after I’m ill for three days,” Szalai joked.

Touré as a backpack

His 69th minute winner was the type of goal only scored by strikers of a similar style to Szalai; strong target men who use their body to their advantage. Kunde Malong whipped in a cross to the back post from the right hand side of the pitch. Karim Onisiwo met the ball, heading it back across the goal to where Szalai was waiting. The 31-year-old was far too strong for Almamy Touré, holding him off while he managed to turn and get the strike away from close-range, finding the back of the net. “Those types of strikers are really strong in those positions. He gives the defender a piggyback and still manages to score,” said Ralph Gunesch, the former Mainz defender.

The striker was relieved to have ended his goal drought, especially because of what had happened just a minute before his goal. Frankfurt’s goalkeeper Frederik Rönnow parried Levin Öztunali’s well-struck long range effort out into the six yard box and Szalai reacted quickest to the rebound. It seemed as if the Hungarian was left with a mere tap in, however the man between the sticks pulled off a magnificent save to deny him, pushing the ball onto the crossbar. However Manuel Gräfe had already blown his whistle for offside anyway. “I was a bit relieved that the ref had blown his whistle,” the striker confessed, despite the cameras proving that he actually hadn’t been in an offside position.

“After the red card we made the decision at half time to bring Ádám into the attack because of the presence he brings, with his power, strength and aerial ability,” said Achim Beierlozer. “It was clear that we needed a player in the box with good movement due to the number of crosses we were putting in.” And one that is strong enough to hold off defenders with ease. The Hungarian’s goal will hopefully give his side the boost they need to get another result away at FC Augsburg on Saturday.

Robin Zentner of course played his part in leading the team to their second win in a row. The 05 goalkeeper denied Frankfurt numerous times from scoring a breakaway goal. “Unfortunately our performance level dropped a bit after we made it 2-1,” said Mainz’s shot stopper. “We forgot to play the simple ball, rushed our forward passes, and allowed them to hit us on the counter. We need to learn from this and make sure we handle the situation better in the future.” However, as a local lad, the win was particularly special for him. “There are lots of Frankfurt fans where I’m from (Rheingau) but we’ve silenced them for now.”