STEP BY STEP THE TURNAROUND WILL COME

Mainz searching first points of season against Leverkusen - Lichte: Progress should be clear to see 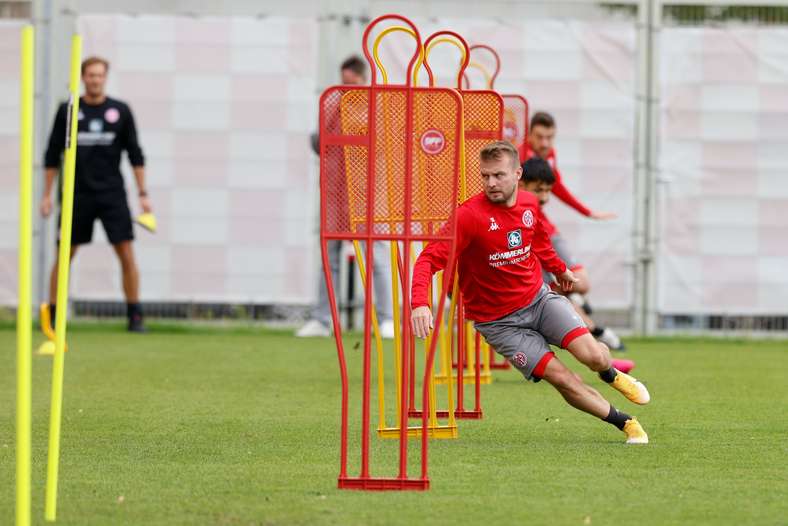 After three defeats, will 1 FSV Mainz 05 succeed in achieving a much-needed turnaround in the fourth Bundesliga match of the season? "We have to get out of this turbulent period and turn things around," said Rouven Schröder in the press conference two days before the home game on Saturday (3.30 p.m. CET) against Bayer 04 Leverkusen at the OPEL ARENA, where 250 spectators will be in attendance due to the latest coronavirus developments.

Last week, in the friendly against Karlsruher SC, the problems from the first few Bundesliga matches were still clearly evident and caused another defeat. Before and after that, however, it was noticeable in training that the team is trying hard to correct this, to tighten up the defensive issues, and concede fewer easy goals. "We used the two weeks in the best possible way to work on this issue: Defending compactly, knowing what to do in different situations in order to correct the mistakes of past games," said Jan-Moritz Lichte. The head coach had a large training group at his disposal, even though the national team players were missing.

Lichte therefore identified the international break as an advantage for Mainz 05. "I hope that this will be evident on Saturday. Of course it's difficult because not everyone was there and you have to get the others up to speed who have just come back. But we will make sure, through video sessions, conversations and training, that everyone knows exactly what the topic was. The 40-year-old relied on basic hard work. Nothing will change automatically. "We have things that we have to work through. We’ll do this every day in order to improve step-by-step. I don't believe that there is one single solution. Everyone must understand that the work we do every day will be crucial to get us to where we want to be."

The Sporting Director was present at all training sessions on the touchline and was close to the team. "Over the past two weeks you could see how close the team is, how willing they are to make things happen. They are responding to the coach's work," said Schröder, who is going into the game against Bayer with confidence. "Everyone wants to see the hard work rewarded. Everyone longs to be able to take a short breather after the final whistle with a good feeling. We will work hard for that. Of course we want to perform well and earn points. He would like to see unity on the field, but also patience when certain situations in the game don't go to plan due to the quality of the opponent.

Being a role model & implementing a common idea

"I expect everyone to give all that they have," the coach explained. "That together we see a clear direction and recognise the plan we have on the pitch. If we don’t stick to the plan, the players should be able to hold each other accountable and draw attention to it. In the game itself, we have to prove that there are not just two or three people, but that there are several who want to grow into this role and take responsibility". Everyone has to set an example with their effort. "As a player, you can always hold on to that."

In the course of Thursday, all Mainz national players should be back with their teammates, assuming a negative test result. In the final training session on Friday, Lichte will have his entire squad back on the pitch for the first time in order to work specifically on fine-tuning. "Leverkusen is a top team. In addition to their great attacking play, they have a strong defence and are very difficult to play," says the Mainz coach. "We want to develop a plan that we see on the pitch for 90 minutes on Saturday. We have rehearsed and trained various things and will send the players onto the field, who we are convinced will cope best with the situation and be able to deliver their best possible performance".