ST. JUSTE: "DO NOT REGARD BIELEFELD AS A RISING STAR" 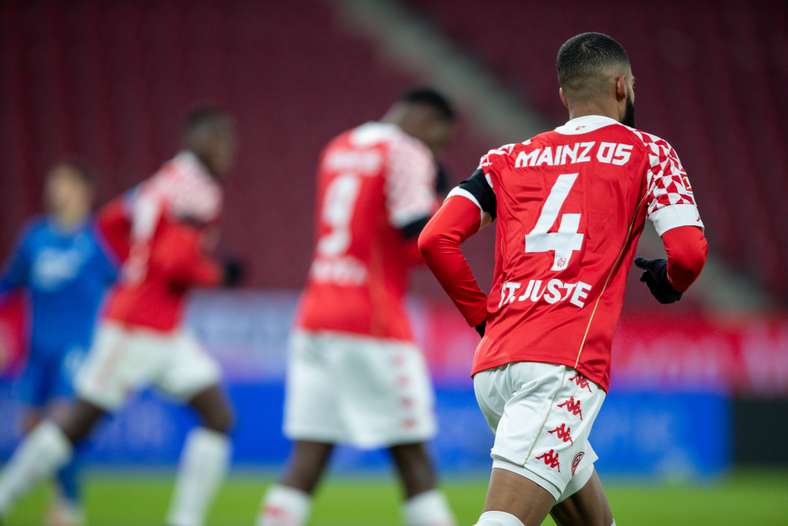 Regularly in the spotlight going forward as well as at the back: Only three Mainz players have scored more goals this season than St. Juste.

Alongside Robin Zentner, he is Mainz's ever-present in the team: Jeremiah St. Juste hasn't missed a minute of play in the first nine matches. While the 24-year-old defender was also searching for his top form in the first weeks of the season, he has now become one of the keys to the impressive upturn in form, as a versatile defensive player, he also knows how to impress when it comes to statistics.

In the 65th minute of the match against Hoffenheim, St. Juste was at odds with himself: he had just been given the opportunity to respond immediately to the visitors equaliser three minutes earlier. After a corner, Alexander Hack had put the ball in front of goal, "Jer", as he is called, pulled away from five metres, but his shot was blocked and finally landed in the arms of keeper Oliver Baumann. In the end, Mainz was left with one point, their fifth of the season, which had begun so disastrously with six opening defeats.

Delivered the goods in an all-or-nothing situation

According to the Dutchman, various factors contributed to the improved form, above all the mentality and cohesion in the team: "We were in an all-or-nothing situation and earned our first three points against Freiburg. Points and at best victories are the most important thing for a team". With the momentum of these latest results, the Zerofivers now want to follow up in Bielefeld, and, if it goes to St. Juste, they want to be "more dominant" against the promoted team. Nevertheless, he and his team-mates are well aware of the challenge ahead: "We don't consider Bielefeld to be an up-and-coming star, that doesn't matter. It's a Bundesliga game, that's how we have to approach it and be completely focused. We will have to be wide awake from the very first second. It will be a difficult game, and we have to go into it with the same intensity as we did last time".

Renewed rotation at the back?

It doesn't matter to Jer which position he is in after Levin Öztunali's injury. Because with regard to this decision he has full confidence in the coaching staff: "I like the way Jan-Moritz works, as a person and as a coach, he has a clear approach, clearly addresses the expectations of me and all of the team. He and his team took over in a difficult situation. We've helped each other and together we are on the right path".

The 05 player seems to be on the right track since his move to Bruchweg in the summer of 2019. He has now played 34 Bundesliga matches, scored two goals and provided two assists. Astonishing in the current season: Only the attacking players Jean-Philippe Mateta (22), Jean-Paul Boëtius (15) and Karim Onisiwo (11) have scored more goals than the defensive player (9). Furthermore, no other player in the 05 squad is ahead of him in terms of top speed (35km/h), 51% of duels won also means a solid quota in the defence. St. Juste leads the Mainz team, and as a member of the team council he also clearly expresses his opinion off the pitch. At only 24 years of age, he has an overall package that is still capable of development, but is also extremely coherent. If Mainz can continue to improve like the trend of the past weeks, they are also well on the way to earning this attribute as a team.