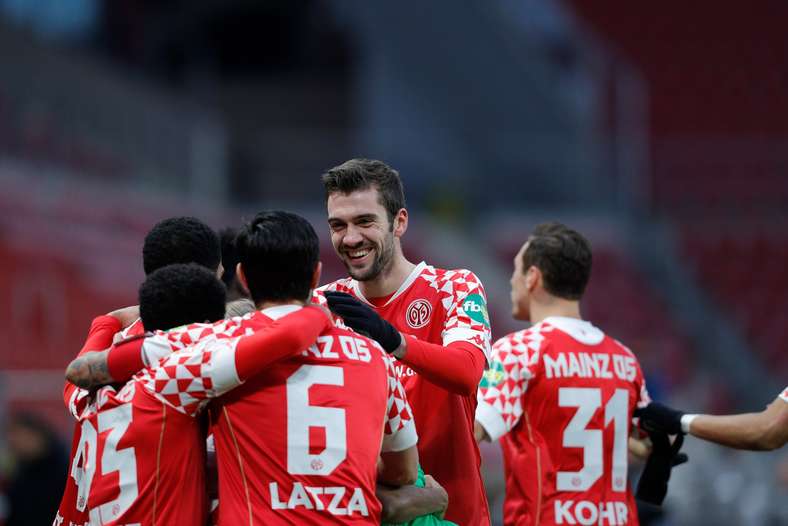 That was Mainz 05 football at its best! On Saturday afternoon, Mainz celebrated a spectacular first home victory against RB Leipzig that was hardly thought possible beforehand. The visitors took the lead twice before the break through Tyler Adams and Marcel Halstenberg, and twice Moussa Niakhaté had equalised. Shortly after the break, da Costa's willpower finally paved the way for Leandro Barreiro to score his first Bundesliga goal, the winning goal on this memorable afternoon, on which the always combative Zerofivers were finally able to celebrate this deserved 3-2 win.

Bo Svensson made four changes to the starting eleven after the defeat against Wolfsburg: Alexander Hack, Jean-Paul Boëtius, Levin Öztunali and Jonny Burkardt were replaced by the recovered Jeremiah St. Juste, the two newcomers Dominik Kohr and Danny da Costa as well as Robin Quaison.

The Zerofivers started the game well, hardly allowing the second-placed team to pass and selling themselves dearly in the first half. The result of a disciplined performance by the home side was that there was little worth mentioning in the early stages. A shot by Leipzig captain Marcel Sabitzer missed the target after eleven minutes. Beyond that, the visitors initially hardly managed to capitalise on a clear advantage in possession. However, the class of the Champions League side was evident when Adams struck to take the lead after a quarter of an hour. It was preceded by a shot from Sabitzer that Robin Zentner was only able to direct to the underside of the crossbar. But Mainz's response to this setback was not long in coming: After a fine cross from da Costa, Quaison headed the ball over the net (19'). While the first opportunity had not yet led to success, a little later there was a rarity: Mainz scored from a set-piece! Danny Latza hit a free-kick sharply in front of goal, Kohr extended and Gulacsi could only let it go, so that Niakhaté only had to stick his foot out - 1-1 (24'). The match became more combative and the visitors had more of the game, but few chances to score. In the 29th minute, Kohr blocked Olmo's shot in the nick of time, but Leipzig would take the lead again one minute later. Angelino returned a deflected corner to the front of the goal, Dayot Upamecano passed to Marcel Halstenberg, who gave Zentner no chance from close range. But again Mainz struck back promptly and again the initial situation was a set-piece from Latza. Stefan Bell rose highest and headed to Niakhaté, who scored his second from four metres - it was 2-2 (35'). Mainz's committed performance was rewarded by going in level at the break.

The Zerofivers came out of the changing rooms unchanged in terms of personnel and commitment and even took the lead for the first time in the 50th minute. Da Costa had paved the way for the first Bundesliga goal by 05 youngster Barreiro with an effort of will on the right wing, the Luxembourg international opting for a perfect run and sliding in at the far post. A little later, St. Juste's header from Latza's cross was a little too high, but Mainz were fully in the game and deserved to be in the lead. Zentner showed his class for the first time in the 64th minute when he deflected a shot from substitute Christopher Nkunku around the post with his fingertips. Svensson reacted to the increasing Leipzig pressure with a triple change and brought on Öztunali, Kevin Stöger and Ádám Szalai for Phillipp Mwene, Danny Latza and Quaison.

While Leipzig pressed for an equaliser - there were no further good chances at first - the hosts counterattacked. In the 71st minute, even defensive general Stefan Bell got involved and, after a one-two with Szalai, put the ball over the goal from 20 metres - an important sign of life going forward! Mainz continued to have the better chances: After a Stöger cross, Onisiwo reached the ball with the tips of his hair, but the ball missed the goal by a good metre (77'). The OPEL ARENA had not seen such a battle for a long time as in this final phase. Nordi Mukiele forced Zentner into another brilliant save in the 82nd minute after a quick counter-attack. And it was to be the last of the day, because his front men then threw themselves into every ball and tackle, kept the ball away from their own goal and Leipzig did not score any more goals in the six minutes (!) of injury time. Thanks to this sensation and the first home win of the season, Mainz celebrated a first small step in the relegation battle and now has ten points to its name before the trip to Stuttgart on Friday evening.