SIEWERT: MAKE AN IMPACT IN EVERY PHASE OF THE GAME 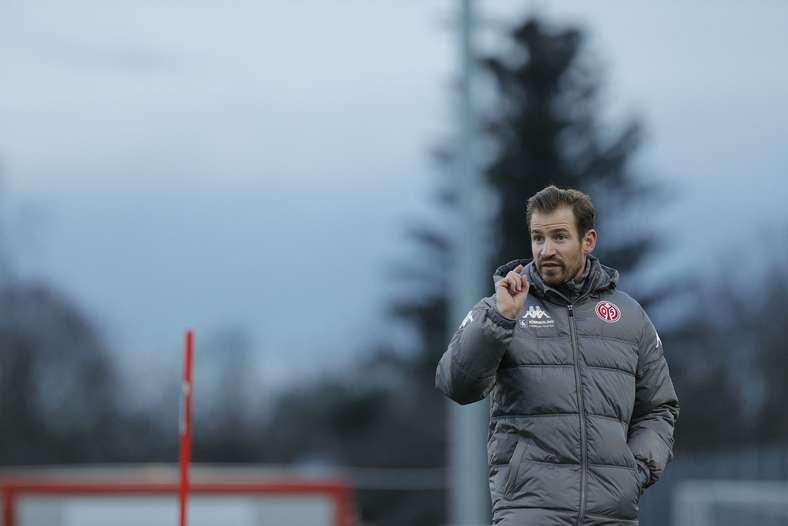 Following the game at FC Bayern, Jan Siewert returns to his role as head coach of the academy.

For the first and, for the time being, probably the last time, Mainz sporting director Martin Schmidt and interim coach Jan Siewert took their seats together on the podium in the OPEL ARENA press conference room on the first day of the new year. The main topic was the upcoming match against league leaders Bayern Munich on Sunday evening (6pm CET, live on 05ER.fm), which, as they both emphasised, the Mainz team should approach with a fighting spirit, the appropriate body language and the belief that they are by no means without a chance. Schmidt said that information about the new head coach would be given as soon as something was ready to be announced. Until then, the full focus is on the match against Munich.

The proverbial bus will not be parked in front of their own goal in the Allianz Arena, Siewert made clear, without wanting to go into detail about the match plan, but: "We should be confident going forward, defend aggressively, then you can also create chances. And we have a chance. There will be phases in which you only have to defend. But also phases that we want to use, where there are opportunities to hurt Munich." While the attitude and the right body language should serve as prerequisites, the 38-year-old coach emphasised that the Zerofivers also want to "embody the joy of playing" against the record champions in order to be able to score accordingly in every phase of the game and to make a case for being able to take something tangible back to the Bruchweg after 90 minutes. He and his coaching team are now preparing the players to find the right mix. He is also very comfortable with his role as an interim coach. He felt "honoured" and immediately said yes to the question of whether he could help out. "I've only been here for half a year, but that's Mainz 05, too."

Schmidt, who celebrated Mainz's last away win at FCB (in March 2016), initially drew a positive conclusion from his first few days in his new role at Bruchweg. He gained positive impressions both in the dressing room and during training. "The body language is right," the Swiss observed. He has met a team "that wants it". So far, his impression has been consistently "positive". As an example, he reported on a conversation with the second returnee Christian Heidel in his office: "We were sitting there and suddenly it got loud outside on the training pitch, so we opened the windows. There was jubilation, power, a good sign," the 53-year-old explained. With that, the sporting director wants to underline that there is life in this team. A good atmosphere paired with highly concentrated work on the training pitch. "Something is possible in Munich if everything fits," Schmidt is convinced. "We know that we can't turn it around from one week to the next and play Bayern up against the wall, but we are already counting on a reaction from the team."

The coach also praised the attitude of the players in the sessions so far: "The boys are dealing with the situation in a concentrated and respectful manner," said the Mainz coach, describing the work with the team since Tuesday afternoon, when he was allowed to lead the first session. With regard to the approach at Bayern, the goal is to take the players, the entire team, with him to a certain extent and to take all feedback into account: "The system of play has to suit the players. No matter what you put in front of them, they have to understand it and feel that it can be implemented. That's how we approached the week, through a lot of conversations, through the experience we gained from watching video footage. Of course, we also exchanged ideas within the coaching team." The sum of the knowledge gathered in this way will ultimately decide on the formation and personnel on the pitch following the remaining two training sessions before the trip to Munich. However, what he has already given his team, also with a view to the upcoming relegation battle in the coming weeks and months, is the following: "No matter what the conditions are, no matter what is going on. Throw yourself into it for Mainz 05. And we'll throw ourselves into it," Siewert promised.

Mainz will have to do without Kunde Malong, who has just undergone surgery, Levin Öztunali, who is getting used to team training with individual sessions, and the two young talents Paul Nebel and Niklas Tauer, who are both injured.