SHOWED THAT WE CAN FIGHT

Mainz quotes after the draw at BVB 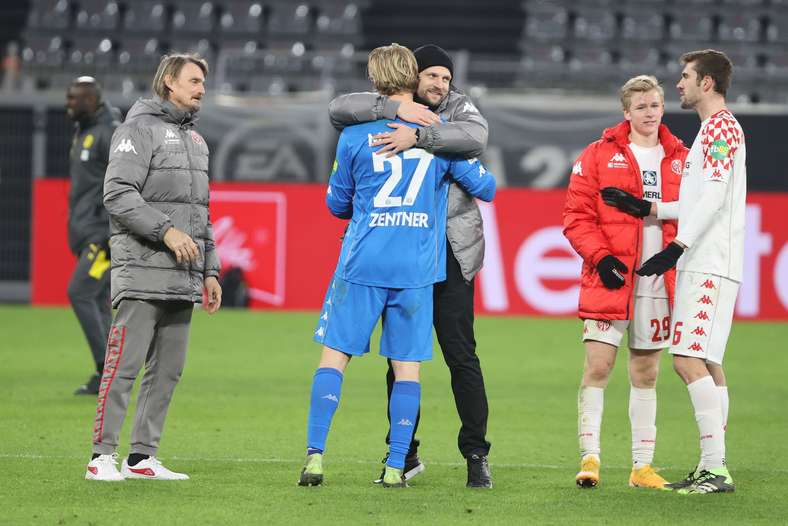 After 90 minutes, the visitors had ran almost ten kilometres more than the favourites at the Signal Iduna Park in Dortmund. While this impressive figure was admittedly due on the one hand to the hosts' high share of possession - the Mainzers repeatedly had to close off the spaces, often successfully - it also reflected the attitude of the Mainz team, in which everyone fought for everyone else and, as demanded by the head coach before kick-off, the next team-mate was always waiting in close proximity to be deployed as a backup. It turned out to be an extremely demanding endeavour, but at the same time one that had no alternative. And it was rewarded.

Commitment and will were right. That was in agreement from everyone, and classified the point against last season's runners-up as a point gained. Although three points had been within reach after a performance that, if repeated by the Zerofivers, should give them confidence for the coming weeks and months in the relegation battle.

Robin Zentner: We didn't get off to a good start and were lucky that the cheap goal we conceded at the beginning was taken back. After that, we were well in the game and allowed a few more chances, but it was important to go into the break at 0-0. We knew that something was up for grabs and you could feel that in the dressing room. Levin scored a beautiful goal and after that we actually defended well. The goal we conceded would have been easy to prevent, so it was very unfortunate. Afterwards, we were lucky with the penalty and in the end we are happy with the point, which is what it is in our situation.

...the left foot is not only for standing

Levin Öztunali: "I think we fought our way into the game, even if not everything worked out in the beginning. After a few minutes, we were better in the game and kept getting forward ourselves. Of course it was great to help the team with the goal because it gave us a bit more security. The ball was in a good position, I had a good position to shoot, my left foot is not only there for standing and then I just fired it in. We wanted to play as a team, everyone fought for everyone else, as you could see. We have to repeat that in the next games."

Alexander Hack: "In the first half, we made life a bit difficult for ourselves because we didn't have the necessary composure. But we did a very good job against the ball today. We gave it our all and won a lot of balls. If we had played one or two balls more cleanly, we could have had more chances. We've talked a lot in the last few weeks and today on the pitch, just like in the first half in Munich, we showed that we were a team on the pitch and that we can fight. That's important for the team and ultimately for Mainz as a whole. You have to see that the team wants it and wants to get points. I think today we took the first step towards gaining respect. I look forward to the next games with confidence, if attitude and will are there in the form."