"WE MUST SHOW THAT WE REALLY ARE MAINZERS".

Energy, passion, willingness to fight: Christian Heidel and Martin Schmidt exude confidence after their return, but at the same time name important prerequisites for a turnaround in form 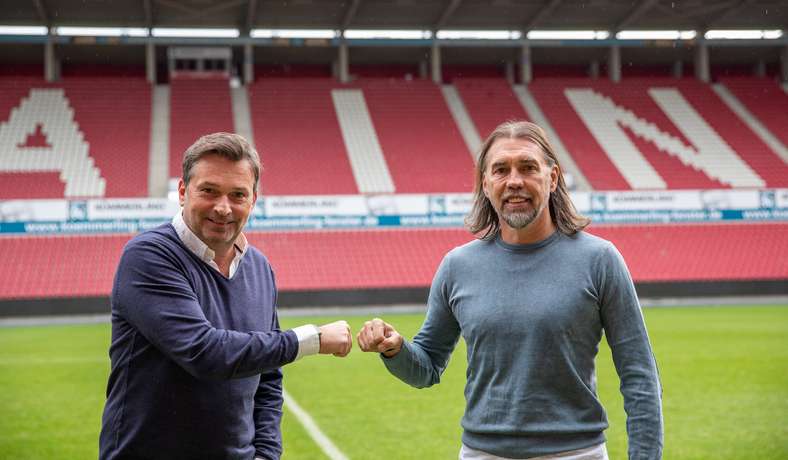 Heidel & Schmidt on the pitch at the OPEL ARENA on Tuesday.

It was a decision that spoke to the heart of many fans. The official presentation of Christian Heidel, board member for strategy, sport and communication, and Martin Schmidt, the new sporting director (both with contracts until 2022), showed a spirit of optimism, a fighting spirit and the authentically conveyed belief that together they can turn the precarious situation around. However, as returnee Heidel emphasised, he is by no means back to act as the sole saviour. The 57-year-old said that the mission to stay in the league would not end successfully only through him, but rather with the help of all Mainz players and a team that must and will fight back.

"It already feels like coming home," said the Mainz native some four and a half years after his departure from Bruchweg. "I've been back one day and a lot has changed. Nevertheless, Mainz 05 has always remained my club. I feel good," he explained soberly at first, before allowing deep insights into his emotional world in his familiar, openly authentic manner, as well as a little emotionally: "Shocked" he had often been recently, especially when looking at the comment columns on social media. For him, it's about "how we deal with each other. I want to say to the people of Mainz: we can only do it together! When you're on top, it's easy, and we now have a responsibility as a club. But I don't know this mood, it can't have anything to do with personal insults. It only goes in one direction. Mistakes have been made that also happened to us in the past. But either we are Mainzers and stand together, or we are not. You can criticise, but you have to have the feeling that this is still my club." This feeling, he said, should never be lost, and everyone should be aware of that. "This is the way we want to go. We all have to show that we are really Mainzers. Then we have a chance. Everyone says we are already relegated. But we will fight back and that has to start today. That is the appeal to everyone who cares about Mainz," Heidel said energetically.

In view of the words of the legendary manager, who had once led the Zerofivers from the lower realms of League Two to the Bundesliga and the Europa League in 25 years in office, the live feedback from the fans on 05ER.tv during the press conference broadcast live was almost unanimous, and in view of the preceding remarks at the same time soothing to the soul. Warm words and heart emojis from hopeful fans and sympathisers dominated the live chat. A successful impulse, a fresh beginning with new, old faces for whom Mainz is a matter of the heart, as former head coach Schmidt also emphasised: What he felt after returning to his old place of work? "Great gratitude and heartfelt motivation. I owe a lot to Mainz 05 and am now sitting here with a lot of valuable experience to give something back to the club, the city and also the fans."

The first big challenge that awaits the duo comes before the upcoming match at Bayern Munich on Sunday evening. Schmidt did not rule out the possibility of Jan Siewert coaching the team on Sunday as an interim solution. Nevertheless, a long-term solution for the position of head coach should be presented soon, at the latest at the beginning of the new week, as the successor to Jan-Moritz Lichte, who was released on Monday. The Swiss confirmed that Bo Svensson, a long-time player and coach at Mainz's academy, was not completely out of the question, but did not give any more details. There is a clear profile with requirements: "Forward to the core", it should be called. "We want to play the football that has always characterised Mainz 05. Chasing the ball, pressing, counterattacking football. The coach has to bring this profile, we want to stand behind him and support him." The "boss in the club", the defining figure of Mainz football, should become the new coach." And then we want to defend ourselves against opposition, against 17th place. We can't turn the wind, but we can set the sails differently and defend ourselves against all adversity."

Neither Saviour nor Messiah

The promise to do everything in their power to save the Zerofivers from the second Bundesliga relegation in the club's history, it stands. A demanding mission that both Schmidt and Heidel trust the team they now want to get to know first, but at the same time warn against excessive expectations. "The assumption that Mainz 05 will now win all their games is presumptuous. I can only promise that we will do everything to get back on track. I am neither a saviour nor a messiah. In the past, too, not everything was ideal, we didn't always have a sold-out stadium, not only glittering football festivals. We've had difficult situations, but we've managed to get a grip on them. That is our task now as well. It can only be done together," Heidel repeated what he sees as the all-important basic prerequisite for this undertaking.

"We need to get back to that cohesion we experienced in the old days," he urged, without wanting to get too nostalgic, but asking for a return. "We have to be positive behind the boys on the pitch, that's the way that can work. And I dare to promise that the team will plough up the turf." If Heidel, who had recently allowed himself a good year and a half away from football, succeeds in transferring the energy and passion he exuded on Tuesday to the team together with Schmidt and the new head coach, there should be no doubt about it. "The distance is over, now we're off and we're all throwing ourselves into this difficult task." And with unconditional passion on and off the pitch.