Mainz lose 3-1 away from home against Borussia. 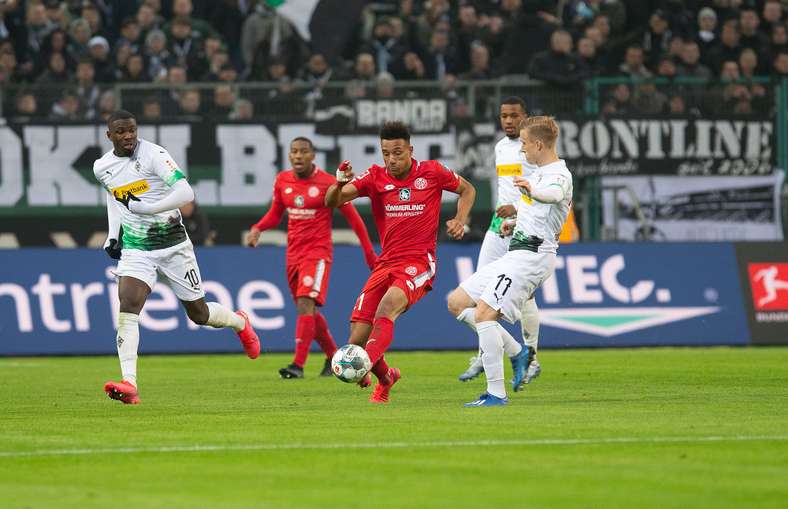 Mainz failed to defend the set-piece and allowed the Foals to complete the turnaround.

Going to sleep while defending a set-piece proved costly for 1. FSV Mainz 05 on Saturday afternoon. The hosts overturned Mainz’ early lead, which was given to them by Robin Quaison (12’). An Allassane Plea double (24’, 76’) and the killer blow from Florian Neuhaus (88’) gave the Foals a 3-1 victory.

Mainz head coach Achim Beierlorzer made two changes to the starting Xi that faced SC Freiburg a week before. Jeremiah St. Juste replaced the suspended Pierre Kunde in midfield and Karim Onisiwo came in for Levin Öztunali on the right wing.

The hosts looked in control of the game in the opening minutes, but failed to create any clear opportunities. The Zerofivers managed to disrupt any thoughts of Gladbach scoring at the vital moments. Quaison looked to put Mainz in front with his head in the 9th minute, but couldn’t find the back of the net. Three minutes later, however, he had the away fans in raptures. Captain Moussa Niakhaté played a delightful long ball forward to the Swede, who had beaten the offside trap. The in-form striker brought the ball under his spell with a brilliant first touch, and rifled it past Yann Sommer with his second (12’). FSV could’ve been two up just moments later, but Yann Sommer was equal to Boëtius’ effort. Mainz looked to be in control, but Gladbach clawed their way into the game and brought it level through Plea. The Frenchman found himself in acres of space at the back post to tap home from Wendt’s free-kick delivery (24’). The final big chance of the half fell to the hosts, and the chance should have been converted, but Marcus Thuram hit the underside of the crossbar from mere metres away (30’). Little further action occurred in the half and it was 1-1 at the break.

Beierlorzer reacted at half time and brought on Daniel Brosinski for Aarón Martín. Borussia came roaring out of the blocks to begin the second half, but, as in the first 45, the Zerofivers stood firm. The guests manage to force a chance almost from nothing. Brosinski unleashed a curling effort from range that seemed destined to nestle in the bottom right corner, but Sommer’s outstretched hand just about tipped the ball wide of the post (61’). Zentner produced some heroics to deny what looked like a certain goal for Thuram (71’). It was still level heading into the final quarter of the match, but the floodgates opened late on. Again the Zerofivers went to sleep while defending a set piece and again Plea took advantage. Hermann was unchallenged on the right and crossed towards the Frenchman, who finished calmly (76’). Florian Neuhaus extended the Foals’ lead at the death, lobbing a scrambling Zentner from well over 30 yards out (88’). Mainz go into matchday 19 and a home game against Bayern Munich with 18 points in the bank.