SCHRÖDER: "SOMEONE WHO WANTS TO GET DOWN TO WORK" 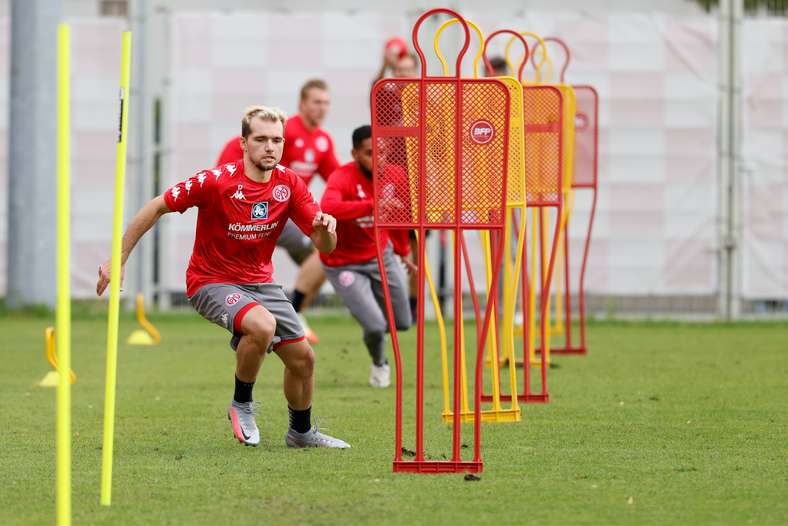 On Wednesday in Mainz: Kevin Stöger takes part in his first training session at Bruchweg

Less than an hour after Mainz 05 had publicly announced the signing of Kevin Stöger, he was already out on the training ground at Bruchweg, working with his new colleagues. The first impression of the 27-year-old Austrian: Stöger had very few problems adapting, was involved in the action straight away and very nimble on his feet, with nice passes and good awareness. Attributes that will serve his new team very well.

Following his first training session, Rouven Schröder spoke again with the media about the signing of the free agent who was with Fortuna Düsseldorf last season. The Sporting Director also explained why the club decided to sign another central player and not a full-back, as many had expected. "The fact that Moussa Niakhaté has not left means that we have a central defender that offers a number of options in different systems. And we have the option to play one of them at right-back," said Schröder, referring to Jeremiah St. Juste, who often played the position for Feyenoord Rotterdam as well as for Mainz. In addition, Aarón has improved significantly in recent weeks.

The board had thought about how to improve the team. "The choice then fell on Kevin. We had the opportunity to sign a left-footer who takes strong set pieces, a German-speaking player who knows the Bundesliga. It's good to get an experienced player who is keen to get started. That's why this is a very good signing for us. This wasn’t about putting established players under pressure. "It's all about raising the quality of the squad. The better player will be picked," said Schröder. "If you have zero points after three games, everyone has to prove themselves. We need the competition."

Kevin Stöger describes himself as an ambitious player who always wants to have the ball. "But the best thing is for the fans to see for themselves. Then they will see what kind of player I am. I think my best position is in the center, whether it's more attacking or defensive," explained Stöger, who once played with Phillipp Mwene in the youth team of VfB Stuttgart and is also well known to Karim Onisiwo. "Kevin is a central player, who can play all three midfield positions in a 4-3-3, he can also play as a ten centrally. Of course we have competition in the central area, but with zero points you always have competition," Schröder emphasized.

It was a difficult time

Stöger, whose contract with the relegated Düsseldorf had expired, was one of the clubless players. "I kept myself fit by running and weight training, but I also had a coach whom I hired," explained the new Mainz native. "It was a difficult time not having a team, especially when the Bundesliga was starting. I watched the games on television, even though it wasn't easy. Of course I was frustrated, but I always had the support of my wife. We got through it well, and I am very happy to be here now.”

He now wants to get to know everything. "I think it will be easy. I'll still take my time, then the rest will come naturally," said the left-footer. "The last few weeks have been very busy here. But Mainz as a club is not letting itself be distracted. There have only been three matches, and I am convinced that we will get out of this crisis in the next few weeks.”