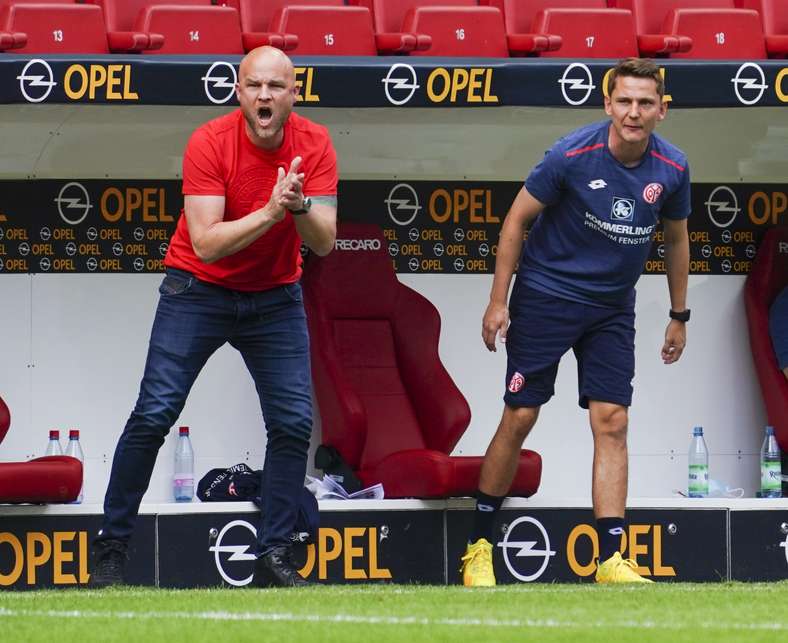 It was game, set and match for the Zerofivers on Saturday evening. Converting their first match point was Rouven Schröder’s aim before the match and his squad delivered. Mainz won 3-1 against Werder Bremen in an exciting match to ensure safety for another Bundesliga season. After an eventful season, the players and the sporting director were happy as they headed into the OPEL ARENA’s changing rooms after a good match.

Rouven Schröder: “We knew that it would all come down to it on the final matchday if we lost the game. We started a bit slowly at the beginning and Bremen started with a lot more energy. We woke up after that and took the lead with our first really dangerous chance. However, the game remained open until the end because Werder believed in themselves. The way we defended at the end was the real Mainz 05! It was a delight to see – I’m so proud. We had to listen to justified criticism, but you should never lose faith in this club. Because everybody who works for this club does it with 100% passion. We will analyse the season and draw the right conclusions.”

Ridle Baku: “There’s no better feeling than being right here right now. We’ve really stepped up our game again in the last few weeks and now we’re celebrating staying up. To be honest I don’t know what the celebration is going to look like yet because we have to stick to the rules, but we will certainly enjoy it.”

Flo Müller: “Winning 3-1 is an amazing feeling. Werder ran out of steam. We did everything right today and it’s paid off at the end. Matches like these are the reason why we play football.”

Karim Onisiwo: “I’ve been here a long time and we’ve had a lot of closer calls. That’s what’s happened over the past few years, but now we’ve proven what we’re capable of. We knew that we had to get the job done today and everyone believed we could. It was a victory of determination because we absolutely wanted those three points here.”

Robin Quaison: “I’m happy and relieved. The goal was nice – it was important to score again. I was annoyed at myself because I could have scored again. It’s difficult to explain and it’s weird how we can lose at home against Augsburg and then play like we did in Dortmund. If we made performances like that more of a regular occurrence, we would be in a different place in the table.”